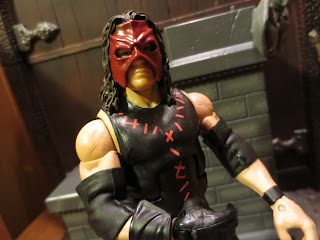 Today for my Re-Halloween special I'm bringing you a look at the Devil's Favorite Demon! It's the Big Red Monster, Kane! I really like Kane. While I did cheer for Seth Rollins at last month's Hell in a Cell event, I still like the guy. Kane just cracks me up and he usually puts on a pretty good show. This Kane is from right before he joined the Authority (probably from Hell in a Cell 2013) and features Kane with a removable mask to show off his normal side and his demon side. While as of my writing this I'm still waiting to see what will happen to Kane (I haven't yet watched the last Smackdown from October yet), in the meantime this Kane figure can keep me busy. Ready for a closer look at the World's Greatest Director of Operations? Then join me after the break... 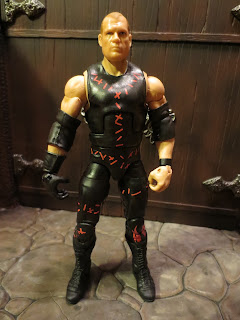 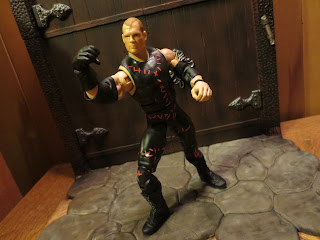 *This is a WWE Elite Collection figure and, so far, my experience with all of these is that they're durable and well articulated. These really are some fun toys to play with and Kane is no exception. Pose him all you want! There's no danger of breakage here! 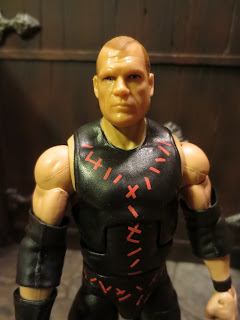 * Kane's headsculpt looks just like...Kane! I love Kane. While he has a fairly serious look on his face, Glenn Jacobs actually just always seems like such an affable, friendly guy. He goes from being the Devil's Favorite Demon to just looking like somebody's dad. I can respect that. 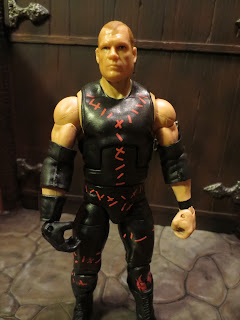 * This definitely isn't Kane's craziest outfit but Mattel has captured it pretty well here in action figure form. I kind of like the look of the red stitches across the black bodysuit. Most of the paintwork is really neat and clean, too.

I'm also digging his elbow pads and larger glove on his right hand. The help give him some additional pizzazz. The left elbow pad can actually be slid off of his arm pretty easily, but the right one cannot due to the glove. 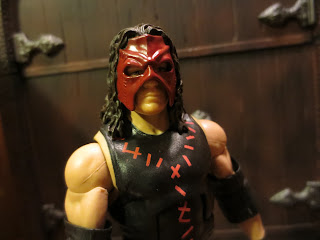 * Kane's only accessory is his mask and it actually looks pretty good on him. It's not so tight that it scuffs the paint but it certainly doesn't look loose or over-sized in person. I like it and it's a fun accessory to have around. 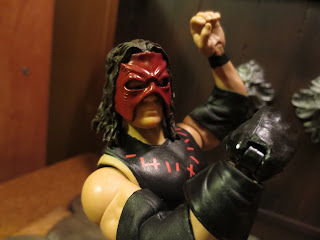 *I don't really have any negatives for Kane except that I wish he came with at least one other accessory. It's always nice to get something the figure can hold or interact with. Even a microphone would have been welcome. 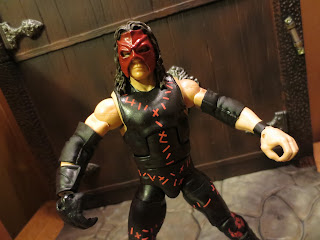 Kane's not the flashiest figure in the WWE Elite Collection but do you really want a WWE collection of action figures without Kane? Of course not! While he might not be the Director of Operations anymore, you can rest assured he's going to play a significant event in things to come. This is a Good and a 1/2 figure and well worth picking up for fans of this line.


I've reviewed a number of other WWE Elite Collection figures, including: