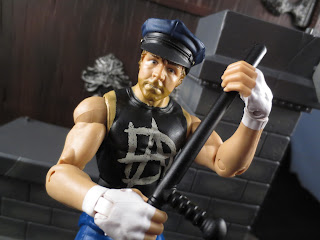 6 months ago in my review of the WWE Elite series 36 Dean Ambrose figure I said that Dean Ambrose was without a doubt one of the most entertaining guys on WWE's roster. That still holds true today! You just can't help but love the out of control wrestler lovingly referred to as the lunatic fringe. Whether he's (literally) stealing WWE titles, driving vehicles into the arena, or passing out flyers for his new talk show, "The Ambrose Asylum," during a match, Ambrose is always bringing something crazy to the shows he's a part of. Today I'm looking at the most recent Dean Ambrose figure from series 41 of Mattel's Elite line of figures which features Ambrose in his ring attire from the May 25th, 2015 episode of WWE Raw when he drove a NYPD police vehicle into the arena to join Roman Reigns in a fight against Seth Rollins, Kane, and J&J Security. Let's turn up the music and charge into the ring, shall we? Join me after the break... 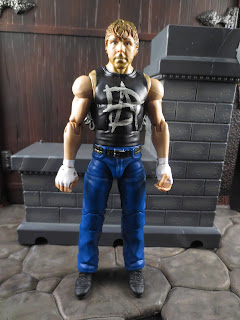 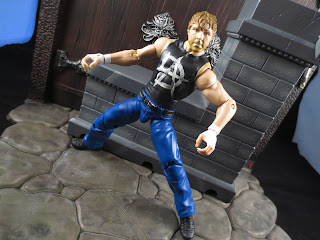 * It's been a few months since I've reviewed a WWE figure so let me remind you in case you've forgotten: These are some really fun figures to play with! The articulation is plentiful, the joints are sturdy, and the slightly larger size of the figures really makes these guys a delight. Dean Ambrose is a lively, dynamic wrestler and this figure nicely captures his madcap personality. 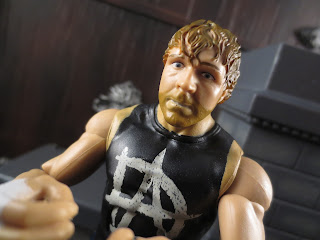 * I love this intense face sculpt! Expressive faces can be tough to pull off but I think Mattel did a nice job at capturing that crazy, intense expression Ambrose has when he's about to fly out of the ring and land on his opponent. The eyes and hair are dead-on accurate. 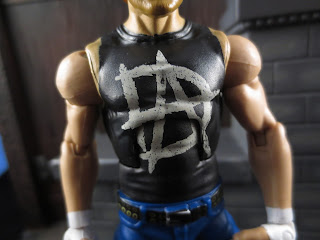 * While this figure shares lower body and arms with the series 36 Dean Ambrose, the tors is actually different sculpt. The shirt is also painted differently too as it's black and features the logo with a D and A in a shape that resembles the anarchy symbol. I like it, particularly the weathered appearance of the paint. 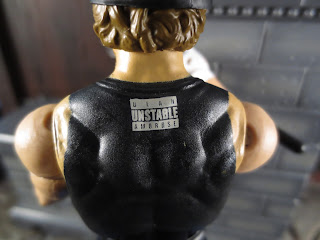 * Read the fine print! Yes, on the back of Dean's shirt you can clearly see the printed logo that reads "Dean Unstable Ambrose" in a text block. Mattel does an excellent job with printing these smaller details and this is another success. 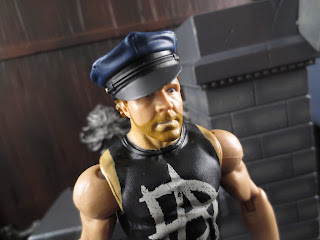 * While Dean Ambrose showed up wearing both the hat and a police jacket on the episode of Raw which this outfit comes from, the police hat itself is still a welcome touch (he didn't wear the jacket into the ring or anything). It fits the figure well (I intentionally made it sit sideways for the picture) and definitely helps separate this from other Dean Ambrose figures on your shelf. 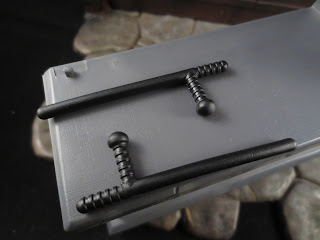 * To kind of complete his police officer look, Dean Ambrose comes with two nightsticks. They're nice, sturdy accessories and are actually a ton of fun to play around with as the figure can hold them in a number of different ways. Good stuff to have around, really. 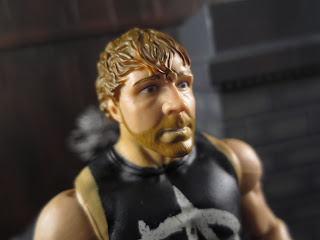 * Wanna hear about something crazy? How about that beard? I don't know, it's not terrible but it does seem a bit heavier than the unshaven look Ambrose usually sports. It doesn't look bad at a distance or at a glance but it definitely seems a but too thick for Ambrose. 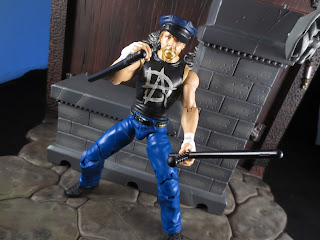 Dean Ambrose is another fine addition to the WWE Elite line. I like that Mattel did something different with the headsculpt (although I prefer the series 36 headsculpt) and I'm enjoying the extra accessories included here. It's always fun to see some pretty scene/match specific accessories included with a figure and the police hat and nightsticks definitely fit the bill. This is another Great Dean Ambrose figure and one heck of a fun toy. He's been out for a couple of months now although I can't say I've ever seen him at retail. Keep an eye out for him if you need some crazy in your ranks!

I've reviewed plenty of other Mattel WWE figures, including: