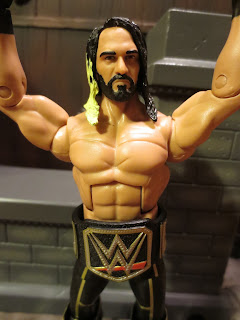 While today is the day for Survivor Series 2015 (Yeah!!!) it sucks that as I'm writing this the tournament for determining who will fight for Seth's vacated title is ongoing. Yeah, Seth Rollin's injury at a house show in Dublin, Ireland that caused some pretty serious damage to his knee and required surgery is supposed to leave him out of action for up to 9 months. Here's a guy who had a successful run with the Shield, became Mr. Money in the Bank 2014, stole the show and the title at WrestleMania 31, beat John Cena for the US Championship, and has continued to successfully defend the World Heavyweight Championship on a number of occasions who has now had to vacate the title and will miss a number of major events for 2016. Seth is an awesome performer and a great wrestler who always stole the show every time he had the chance. Today I'm looking at a figure that honors one of his biggest accomplishments: Cashing in the 2014 Money in the Bank contract during the Reigns/ Lesnar title match at WrestleMania. This figure is a Toys 'R Us exclusive and didn't take me too many trips to find. I found it on my second trip to my nearest TRU and they had plenty on the shelves. Ready for a closer look at The Man himself? Then join me after the break... 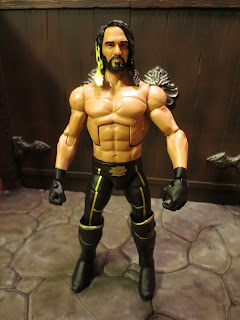 Accessories: WWE World Heavyweight Championship title and the 2014 Money in the Bank Briefcase. 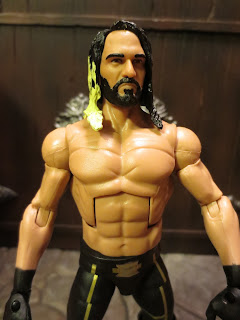 
*First things first: This figure is really just a repaint of the Series 37 Seth Rollins with the Heavyweight Championship. The only paint differences are that Seth has less yellow in his hair here than on the Series 37 figure (that one was from Hell in a Cell 2014) and gold trim on his pants and belt. The figure still looks good and captures Seth's look and attitude just right. 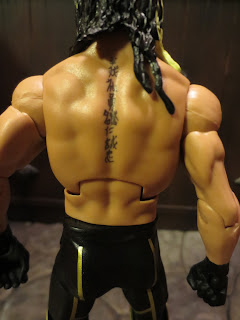 *One of the best things about the WWE Elite figures is that they really strive for accuracy when it comes to capturing tattoos. While the burning page tattoo on Seth's wrist is covered up by his gloves, the seven principles of Bushido are very clear on his back: Integrity, Respect, Courage, Honor, Compassion, Honesty, and Loyalty. Interestingly, hustle is not listed. I guess the Samurai left that one off. 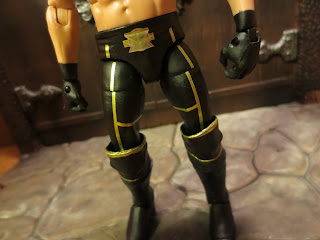 * As I mentioned earlier, there really are no difference between this figure and the Series 37 Seth Rollins except for paint differences. The main difference that will stand is the gold trim on Seth's pants and belt buckle. It looks pretty good and really helps to visually depict his new status as a champion! 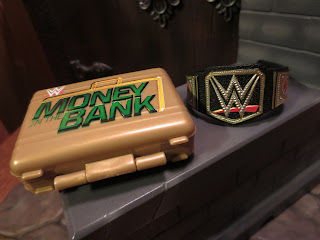 * Seth comes with two accessories, neither of which are new or unique to him. Still, they're pretty cool. He comes with the opening 2014 Money in the Bank briefcase and the new all rubber WWE World Heavyweight Championship title. These are both great accessories and fit the theme of the set well. I know some people don't like this new title belt (it first appeared with the Series 37 Brock Lesnar) but I don't think it's that bad. 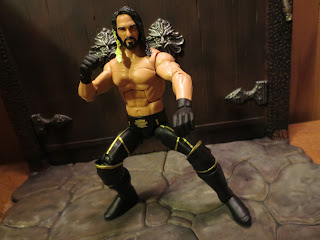 * Mattel's WWE Elite Collection is without a doubt one of the best lines on the market today when it comes to action figures with great articulation and above average durability. These things can take a lot of punishment and yet still feature all of the articulation you could expect on a $20 figure. In a competition for the best mass market line out right now, I'd be stuck between these and Hasbro's Star Wars Black. 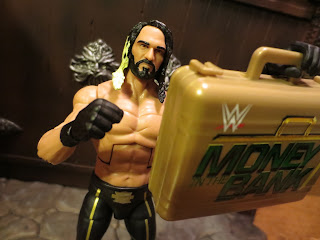 This is a really cool store exclusive. While I'm anxiously awaiting more version of Seth (particularly in his awesome white outfit from SummerSlam 2015 and Night of Champions 2015) this is a pretty significant in his career and in WrestleMania 31. I don't have any major complaints here and I can easily give this figure a Great and a 1/2 rating. He's well worth tracking down and picking up if you're a fan or into wrestling figures. Now, let's hope that Seth Rollins makes a full recovery and delivers many more exceptional performances in the future.


Of course, as I've mentioned a few times I have reviewed Seth Rollins (Series 37) from the WWE Elite Collection.

I've reviewed a number of other WWE figures from Mattel also, including: