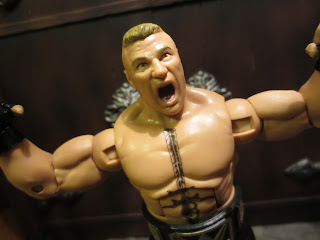 My name is Barbecue17 and I am the reviewer for this Brock Lesnar figure! From the most recent series of WWE Elite figures, series 37, comes this new and improved version of the Beast Incarnate decked out in his SummerSlam 2014 ring gear. Brock's a fearsome guy who has had a pretty big past couple couple of years including  putting John Cena through the ringer at SummerSlam 2014. Brock won the WWE Heavyweight Championship after delivering Cena 16 suplexes and 2 F5s. While the phrase Suplex City hadn't been coined yet, the concept was in full effect. Do you need an action figure to make the rest of your figures run screaming in terror? Just wanting to learn a little more about Lesnar before Hell in the Cell tonight? Then join me as we look at Bork Laser after the break... 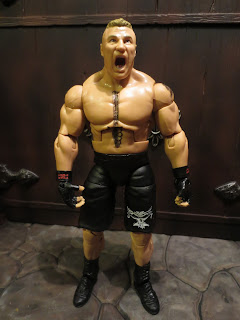 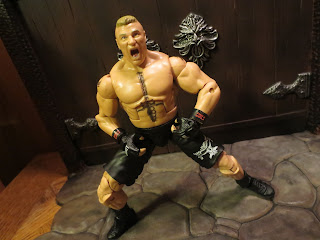 Stellar articulation is par for the course in the WWE Elite Collection and Brock Lesnar is no exception. He's solid, durable, and capable of delivering suplex after suplex! Just like the real Brock Lesnar! You can take bitches to Suplex City all day with no worries about breakage! 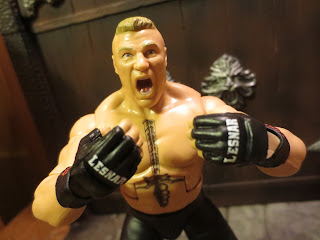 * I'll just say it: The extreme, pterodactyl scream expression on Brock Lesnar's face sold me on this figure. I know that extreme facial expressions on action figures can be a bit of a contentious issue among collectors but since Brock makes so many crazy facial expressions, this just seems to git him. I love it! I love his MMA styled gloves, too. He's really well done. 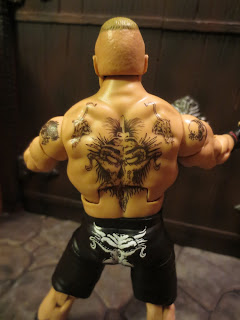 *The WWE Elite figures always have excellent tattoo work and Lesnar is another hit. He has the infamous trench knife on his chest and the various designs all over his back and left and right shoulders. They're all extremely neat and clean, as is the general paintwork overall. The only thing I wish he had was a Jimmy Johns logo on his pants! 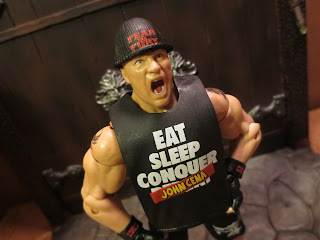 * To dress him up in his entrance look Brock comes with a t-shirt and a hat. The hat is pretty cool and fits nicely Brock's head although I don't seem to recall him wearing this. Can anyone direct me to a screenshot? The t-shirt is a bit odd as Brock wore an actual t-shirt and not a sleeveless, open sided shirt like Ryback wears. Maybe Mattel decided that an actual material shirt just wouldn't look right? Who knows. It's still a cool look for Brock, though. 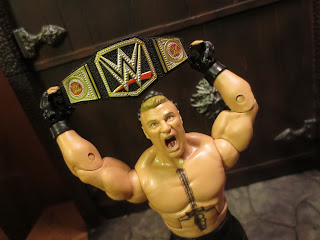 * Some people seem to not like the look of the new all rubber belt (older belts had plastic panels) but I think it looks OK and feels much sturdier. The detail is excellent and it sits more naturally on the figure wearing it. 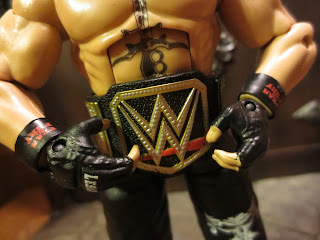 *I love the title belt Lesnar comes with and it looks great on him, but it is really, really tough to get on. It stays put once it is on but it took me about 5 minutes to get it to fit properly. It feels like one of the straps might be just a bit too short. 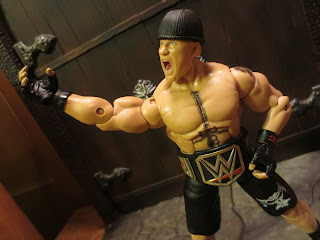 I'm pretty pleased with this version of Brock Lesnar. He's an excellent figure and the expressive headsculpt totally helps this figure to stand out from any other Lesnar figures you might have seen. While I'm not completely sold on the shirt (plenty of other WWE Elite figures have better t-shirts) I do love the belt and the hat. Overall, I'm giving Brock a Great and a 1/2 rating. He's an awesome figure for whenever you need a figure to headline your living room WWE matches or scare the piss out of an uppity newcomer and take them to Suplex City.