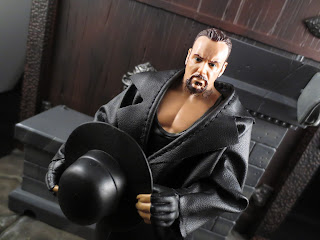 I've been collecting WWE figures for a few years now but I haven't yet picked up an Undertaker action figure. The Undertaker is an insanely classic wrestler and probably one of the few wrestlers that even a non-wrestling fan with any cultural awareness can recognize. Mattel likes to release Undertaker figures pretty often and the figure I'm looking at today is from the new WWE Elite subset that's simply called "Wrestlemania." He's based on the Undertaker's match at Wrestlemania 31 against Bray Wyatt where the two horror themed superstars battled it out. It's pretty cool that this guy is match specific and based on a pretty recent event as well. Ready for a quick look at the Deadman himself? Then join me after the break... 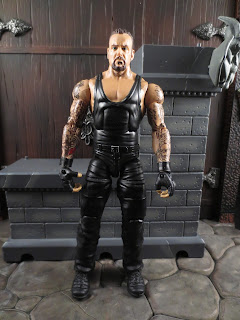 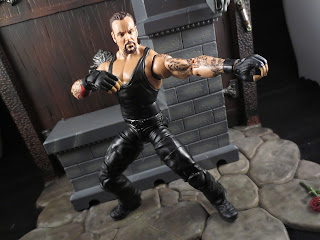 
* Go back and read almost any of my WWE Elite reviews and you'll see the same thing: Sturdy, well articulated, and fun to pose. This guy is a great toy and lots of fun. He's also appropriately taller than many other figures in the line and looks amazingly menacing. 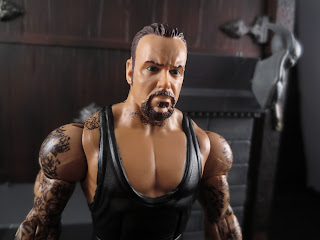 * This isn't a bad Undertaker figure at all, although I'll definitely say that he appears younger than the Undertaker currently is, but it's a solid likeness. 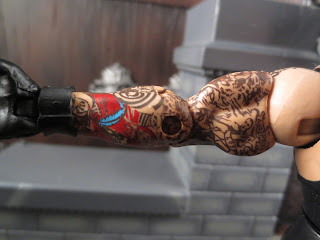 * Check out the tattoos on 'Taker! Mattel does an incredible job on the tattoos on these Elite figures and the Undertaker is no exception. His arm tats, upper back tats, and neck tats are all visible and pretty detailed and recognizable.

* Also, take note that not only does the Undertaker have his MMA styled gloves but he has some wrist wraps, too. These are separate pieces that float freely over his wrists and they look pretty good. 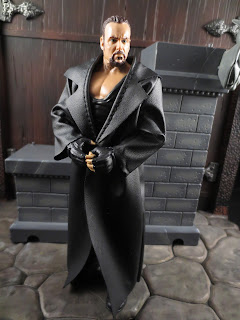 * The Undertaker's entrance is pretty classic so it makes sense that a figure would include his entrance outfit. The Undertaker's coat is incredible. It fits the figure really well, it's easy to place on the figure, and it has a very cool faux-leathery texture. This is definitely one of the better soft goods pieces I've seen on a WWE Elite figure. 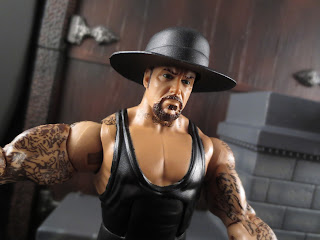 
* This hat looks ridiculous. It's oversized, doesn't fit right, and just seems to be oddly shaped. Fortunately it's not permanently attached to the figure at all but it does harm the look if you're planning on portraying his iconic entrances. 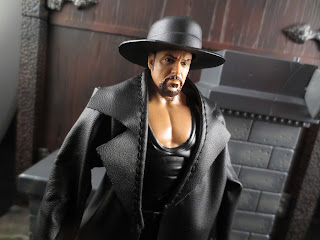 While Mattel releases a number of Undertaker figures in their basic line (and a recent Defining Moments figure) it's not often that you find a pretty classic looking Undertaker. This guy is not a bad choice if you're looking for a Taker figure. His hat's a bit wonky and he might appear a little bit younger than the wrestler actually does, but he's not bad. This is a Good and a 1/2 figure and might fill a need in your collection if you're needing a newer Undertaker for the collection.


Mattel always releases some of these one off releases or mini sets to commemorate Wrestlemania. I've reviewed a couple of these over the past couple of years:

I've reviewed so many other WWE figures, too!: