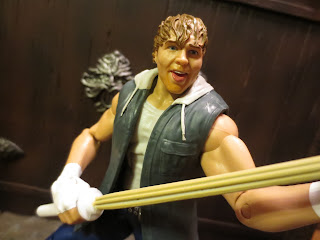 Today I'm looking at the Lunatic Fringe himself: Dean "Unstable" Ambrose. From Series 36 of the WWE Elite Collection by Mattel, this figure represents Dean Ambrose in his outfit from Money in the Bank 2014. Personally, I think Dean is one of the most entertaining guys in WWE right now. Anytime he shows up you just know something fun is going to happen. Heck, Dean Ambrose manages to make Roman Reigns interesting (I really do like those two as a duo, though)! There has been an Elite version of Dean in his SHIELD gear and some basic versions of him, but this is the first Elite that captures his current look. Ready for a closer look? Then join me after the break... 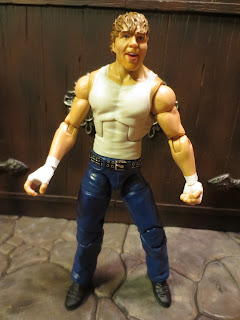 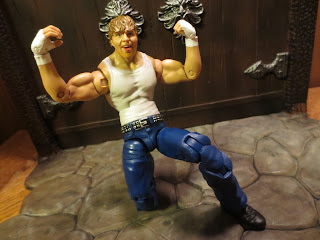 *WWE Elite Collection figures are well articulated, extremely sturdy, and tons of fun to play with. Whether you're buying these for your own collection, purchasing them for a young wrestling fan to play around with, or just want something that you can fiddle around with on your desk, you should be pleased. These are some of the best pure action figures on the market. 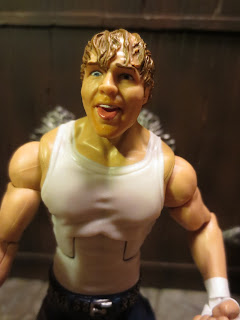 * I love the head sculpt here. Dean's character is perfectly captured here as he looks gleefully out of control! The open mouth with exposed tongue, messy, tussled hair, and wild eyes expression just make this a fun figure to show off. He really looks great in about any pose you can imagine. I'm also loving his t-shirt. It's not as sweaty and nasty as Luke Harper's, but then again, nobody's is. 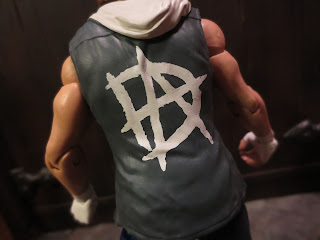 * Dean's hoodie is really cool. It's a softer rubber piece (not cloth) that easily fits over his torso. I'm really digging his "DA ANARCHY" logo on the back, too. 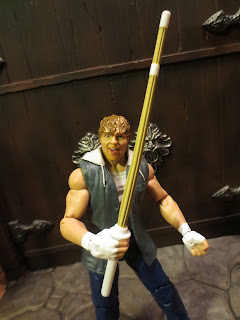 * Dean has used a Kendo stick on a few occasions. These get used a lot in wrestling because while they look pretty fierce and sound wicked, they actually don't hurt too much and cause very little, if any, damage. Still, they look wicked cool and this one is detailed rather nicely. The Kendo stick, or Shinai, is a fairly complex piece of equipment and if you look at a schematic of one, you'll see this accessory fairly accurate.
The Kendo stick is a bit flexible which seems quite authentic to the real weapon. 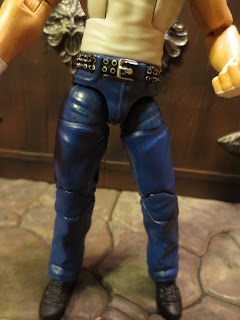 *While most wrestlers are running around in shorts or spandex singlets, Dean Ambrose prefers to do battle in jeans. The waist isn't bad here but the legs don't seem to match them. The waist actually looks like a denim material while the legs look too flat. The top just isn't congruent with what's below in regards to size and texture. Not a huge problem but one that stands out a bit. 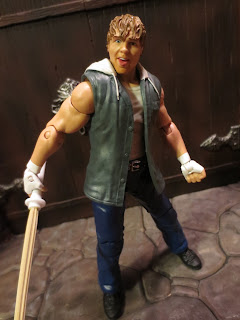 I'm in no ways a completest on this line as I'm not that into the Flashback/ Classic wrestlers, but I'm definitely having fun picking up the current Superstars and Divas that I see on Raw, Smackdown, and the PPVs. Dean Ambrose is a fun, crazy character who really makes a great action figure. He has two solid accessories and plenty of articulation to make them work. He's the only figure I've purchased from Elite 36 so far (although I aim interested in Stardust and would pick up Bo Dallas, the new Bray Wyatt, and Golddust if I found them on sale) and he's a Great figure. If you're a fan or are interested in seeing what the fuss i about with the quality of WWE Elite figures, he's a good one to snap up.