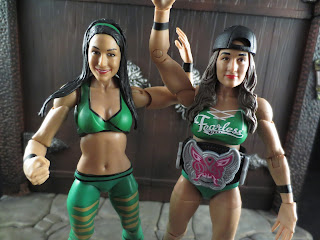 I'm not a huge fan of the Bella Twins. They're definitely heels, but they're really good heels. I'm usually going to be cheering against them, though. If you're not familiar with the Bellas, Nikki and Brie Bella are twins who wrestle in the WWE as the Bella Twins. As part of the (currently inactive) "Team Bella" (Nikki Bella underwent neck surgery fairly recently, I believe), the Bellas tend to gain their victories by distracting referees and their opponents. Often they use what they call "twin magic" which means they dress alike and pretend to be one another to fool their opponents and the refs. It's a silly gimmick but it's won them a number of matches. The Bella Twins are incredibly popular and their figures tend to skyrocket in price. Last week I was in a Target and I found this Battle Pack on the shelf, so I had to grab it. These two ladies are dominant forces in the Divas division and I felt obligated to have them as part of my collection. I was going to keep them Mint on Card and not ever lay hands on them, though. You know why? Because "You can't look but you can't touch!" Get it? (That's the first line to their entrance music, if you're not familiar). Anyways, ready for a closer look? Then join me after the break... 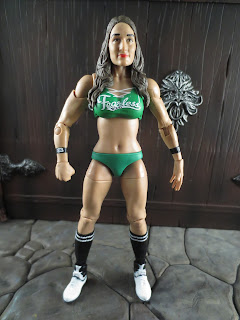 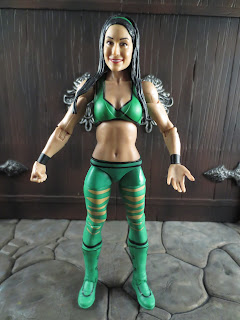 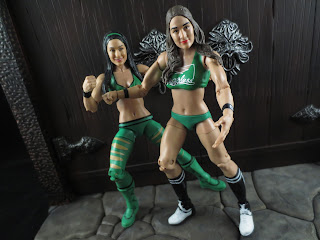 * With Mattel's Divas figures, the "Basic" versions have the same articulation as Elite figures. Thus, in a set like this, you're getting two Elite figures for the price of one. That's not a bad deal. The Divas have decent articulation, about what you would expect from a current Marvel Legends or MOTUC figure, and you should be able to get some decent poses out of them. 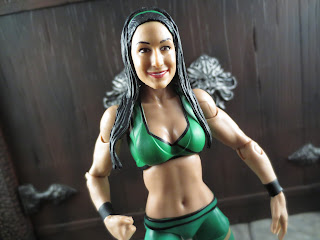 * This is a pretty good likeness of Brie Bella. As long as you're familiar with wrestling, I think you could just be shown the face sculpt and know who this is supposed to be. It might be a bit caricatured but it really does capture her likeness well. The hair looks pretty good, too. Heck, she even has a slimmer, less busty build than Nikki. 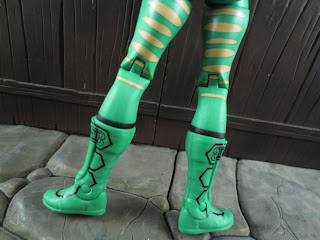 * When I first look at this figure's legs, I think of Battle Cat due to the stripes. That's actually supposed to represent the cuts in Brie's pants and it doesn't look too bad, particularly for a basic series figure. The details on her boots look great as well. Very clean line work with no slop whatsoever. 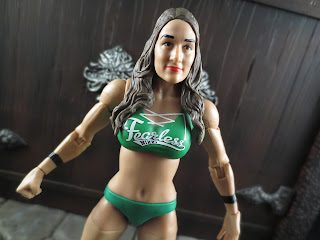 * And here's Nikki! As I mentioned above, Mattel actually gave both of these women separate torsos. Nikki's a bit curvier than Brie and it shows here. The front of her shirt is painted on but it's really clean and well done. The face sculpt definitely captures Nikki's likeness although it's a bit more severe than I would have expected. I'm not a big fan of Nikki Bella, but she's prettier than sculpt gives her credit for. Of course, beauty is tough to capture in plastic, but the likeness is there. 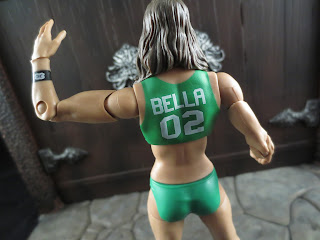 * While Nikki's outfit is mostly just painted on, the paintwork sells the effect since it's extremely neat and clean. Mattel does some really clean work with the stamps and logos in the line and Nikkia's "Bella 02" logo looks great as does the small logons on her sweatbands and the writing on her socks. 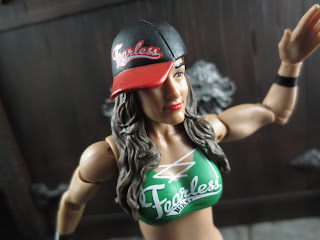 * I actually like the look of Nikki's ball cap. It's made from a solid yet somewhat flexible rubber and it looks good backwards, forward, and sideways. Not a lot of people can pull of ball caps like this. Nikki does it fairly well, though. 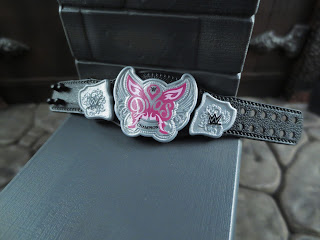 * The set comes with the Diva's Championship title, which I assume is intended for Nikki (although Charlotte is currently holding it as of this writing). It's not a shiny title like the one that came with Paige last year but it looks much better than most of the other titles in the "Basic" line. It fits both Brie and Nikki well and looks pretty good. 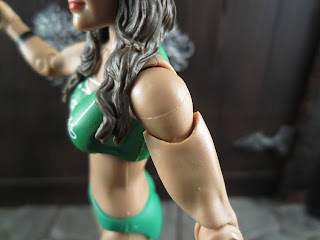 
*One of the problems I still have with most of the Divas figures is that their bicep pegs seem too thin. I'm always concerned about accidentally snapping or bending one when trying to move the shoulder joints (which tend to be a bit tighter than most other joints). I'd love to see Mattel rework this joint in the future. 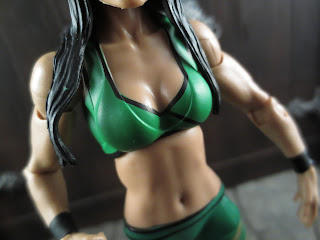 * I have two problems with Brie, who is actually my favorite of the Bella Twins. First:

I hate the look of these painted over tops! Rather than sculpt accurate torsos, Mattel reuses the same female torso and paints the top over it. See how you can tell a sports bra or something is sculpted, but it doesn't match the paint work?

Secondly, where is Brie's bear claws tattoo? Mattel's usually awesome about tattoos, but they left this one off for some reason. 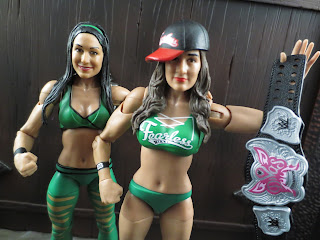 For $20, this is a pretty nice pair of figures. Both of these Divas are well done. Heck, the accessories are much nicer than what you typically get with a Battle Pack, too. You're really getting two Elite figures for the price of one, which isn't a bad deal. If you're building a current roster of WWE figures, you'll probably want the Bellas and this is a great way to pick both of them up at once without paying ridiculous aftermarket prices. Like with most Divas figures, these are kind of tough to find. Stay vigilant and only go into Brie Mode when you must and you too might be able to pick this Great set up for retail price!