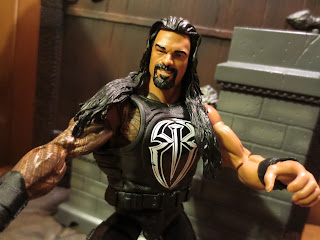 I just got this Roman Reigns figure from the new WWE Elite Collection series 38 and, since I he's going to play a big part in tonight's Survivor Series 2015 event, I figured I'd jump in and review him quickly. What do you think is going to happen tonight? I think it's going to be Reigns versus Owens at Survivor Series for the WWE World Heavyweight Championship (although I'm pulling for Dean Ambrose). I don't think Roman Reigns is going to walk out of Sunday night holding the title, though. I think that either Kevin Owens will win at Survivor Series or that Reigns will win and Seamus will cash in his Money in the Bank contract as soon as Roman wins. We shall see, won't we? Enjoy the fight later tonight and enjoy this toy review of the series 38 Roman Reigns, based on his appearance at WrestleMania 31, after the break... 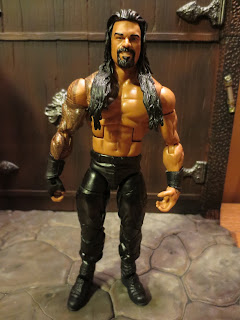 Accessories: 2 vests and a 3-piece barricade. 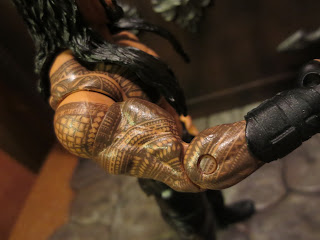 * As always, Mattel does a really good job with the tattoos on their Elite figures. Roman has a very elaborate sleeve on his right arm and it looks insanely accurate to what's there. In fact, I was showing this figure to a friend who watches Superstar Ink and she asked if there was a little turtle under his right wrist bracer. Sure enough, there is. That's insane attention to detail. 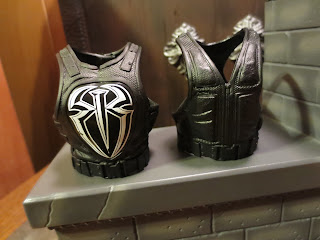 * I really like that Reigns comes with two vests. He's got the standard tactical vest that was a carryover from his Shield days and the newer, sleeker vest that features the cool double "R" Roman Reigns logo. Whenever I see this, I always think of the Spiderman logo on the symbiote suit. It's cool to have a few ways to display Roman included with one figure. 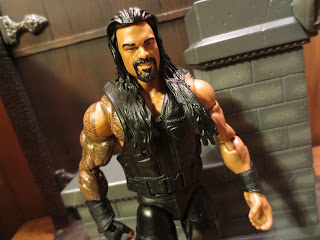 * Here's a quick picture of Roman Reigns wearing his Shield inspired tactical vest. It fits on him quite nicely. It's a little tough to take on and off until you realize that rotating it sideways is makes it pretty easy. You just have to work it around his hair. 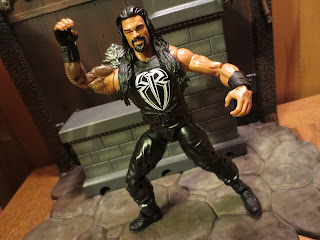 * Roman Reigns is sturdy, durable, and well articulated. You'll be able to pull of spears, Samoan drops, and superman punches all day long. Seriously, Mattel does some fine work with these figures. I've come to appreciate their articulation style even more than the Masters of the Universe Classics scheme, which has been my favorite for the past few years. 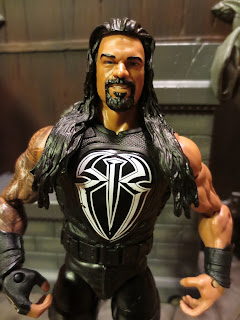 * I'm going to talk about the facial expression on this figure in a minute (down in the negatives, unfortunately) but I do want to point out that everything else about the sculpt of his figure is pretty impressive. Roman Reigns kept the tactical gear inspired ring attire of the Shield and has really turned it into his own thing. He stands out form most other wrestlers on my shelf with his cool textured vests, his cargo pants, and his wrist bracers. His right fingerless glove even has the double "R" logo on it. He's a great looking figure overall. I'm not sure what here is reused from the previous Roman Reigns Elite figures, as I don't own any of them, but it seems to match up well with his Wrestlemania 31 appearance from what I can remember. 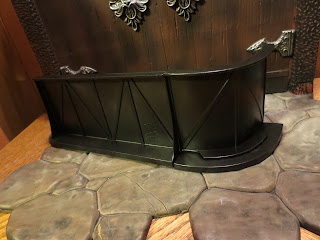 * Since he's a man of the people, Roman Reigns makes his entrance through the crowd doling out fist bumps left and right. This means he has to climb over the barricade every time he comes for a match. To replicate this, Mattel has included a three base barricade. It's kind of cool looking and is definitely a unique accessory.  Considering Roman comes with two vests and a three-piece barricade, you're getting quite a few extras with this figure. 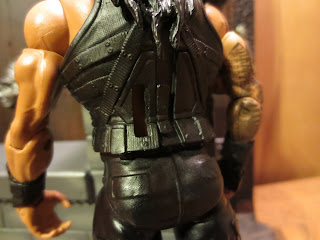 * The most frustrating thing about this figure is that the vest with the double "R" logo is really, really tough to snap onto Roman. It fits just fine but the rubber tabs are just a beast to get closed. Also, since there is torso and waist articulation, moving the figure a bit will cause the vest to pop open. 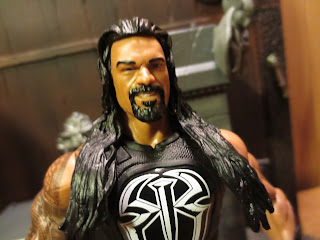 * Umm...what exactly is Roman Reigns doing with his face? Is he trying to smile? Does he smell something awful? Is he trying not to laugh? I think Mattel was trying to go for a bit of a smirk but it just didn't turn out right. It's not a bad likeness of Reigns but the expression isn't doing the figure any justice. I'm OK with extreme expressions but this one is just a bit off the mark. 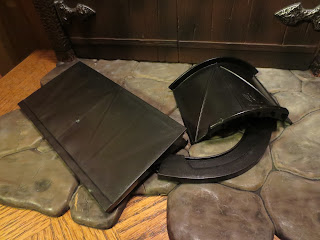 * The barricade accessory is a neat idea and looks cool on display but it falls apart very easily. I'm not sure that's an intended feature here. It really seems like the piece just isn't very solid, mainly the corner piece. It doesn't fit very tightly into the base and it has a tendency to pop out on it's own. I'm hoping to get one of the WWE Elite scale rings this Christmas and I plan on picking up the Ringside Collectibles barricade set rather than buying 17 Roman Reigns figures. 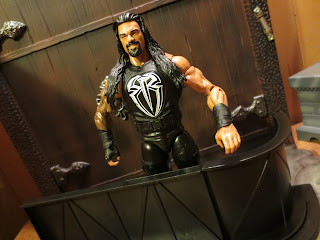 I'm really conflicted! I love that this figure comes with 2 vests and features great articulation and design on the body. I'm not wild about the facial expression, though, and the barricade falls apart too easily while the vests are tough to fasten tightly. There's so much good stuff here, but all of it has a flaw of some kind. I still think that this is a Great figure, but the makings for an Epic figure were here. Depending on the dexterity of your fingers and your appreciation for Roman's half smirk, you might feel differently.

I've reviewed quite a few WWE figures from Mattel and you can believe that. I've reviewed: