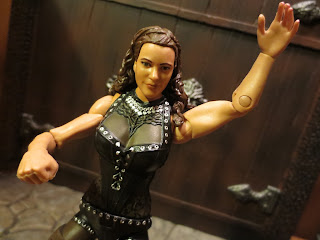 You know what really bugs me? People who buy new action figures, put an older action figure in the package, and return it to the store. That really pisses me off and Mattel's WWE Elite line seems to get hit the hardest by the toy aisle trolls. When my local Wal-Mart got series 37 of the WWE Elite Collection in stock someone bought most of the figures, swapped them out (or stole parts) and returned them. Dean Malenko? They stole his vest. Seth Rollins? They replaced a standard Shield version in the set with some older, junky belts in place of his cement bricks. Brock Lesnar? They put an older, stanard Ryback figure in there. Stephanie McMahon? They put in an old Jakks figure of her in the package. How lame! I really thought my chance for getting a Stephanie McMahon at retail price was gone but fortunately Amazon has had her in stock on and off for a few weeks at the standard price. Pretty great, right? Hopefully made plenty of Stephanie McMahon in her very cool SummerSlam 2014 attire from when she fought (and beat) Brie Bella. Ready for a closer look? Then join me after the break... 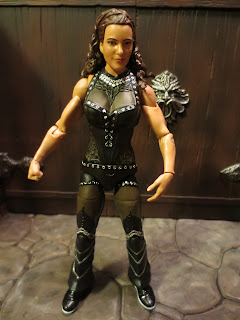 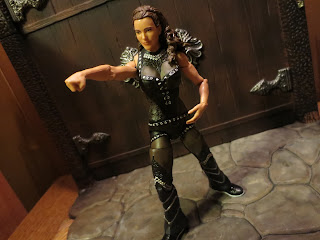 * While the Divas and other female characters tend to have less articulation than the male figures, what they have is still pretty admirable. Stephanie has some problems with her biceps (I'll get to that in a minute) but the rest of the figure is really well done. Fun, durable, and with the ability to take care of business in determining what's best for business, this figure does pretty well. 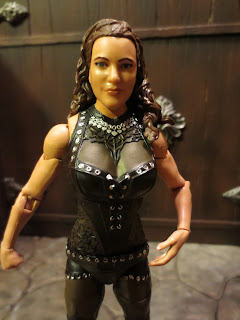 * This is quite possibly the best Divas headsculpt I've ever seen. heck, it's one of the best. This figure really looks a lot like Stephanie McMahon!The outfit is just perfect here. While a number of parts Steph's outfit at SummerSlam 2014 were made of a sheer fabric, Mattel used a lighter black paint to mimic the effect. It looks pretty good overall. 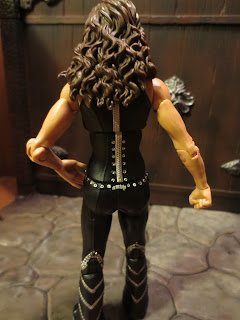 * Here's a shot of the back of Stephanie McMahon's outfit so you can compare it to the figure. Mattel really went all out on this figure. I guess when you're making a figure of a minority owner and the Chief Brand Officer of the WWE, you don't skimp on the budget. She's a completely unique sculpt as far as I can tell. Steph's outfit looks fantastic and really has some fairly neat paintwork, too. It really looks really great all over. 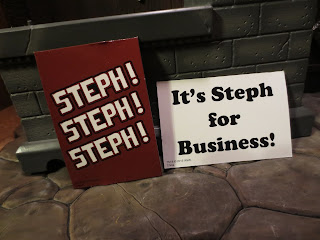 * Stephanie McMahon comes loaded with...two cardboard signs? Yup. That's what she comes with. Couldn't these just be clipped off of the box or something? Hey, that'd be a cool future promo: Make fake in-scale signs on the back of the Elite Collection packaging for collectors to clip out and save. That makes more sense because these don't feel like accessories at all! 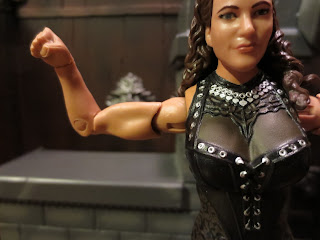 * I alluded to this problem above and here it is: The swivel joint on Stephanie's biceps feels kind of flimsy. Sometimes when you're trying to move either of her arms, the arm will bend at the bicep rather than moving at the shoulder joint. Not sure what's going on here but it does worry me a bit. 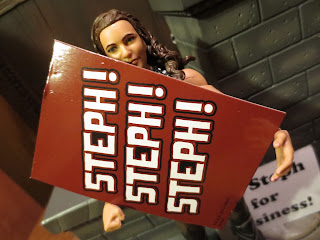 While I'm really not sold on the idea of cardboard signs as accessories in the WWE Elite Collection, the figure itself is really, really good. Stephanie McMahon is one of the best sculpts I've seen in this line all year. If you're a fan of this line or Stephanie McMahon in general, this definitely isn't a figure to miss. She's another Great entry in this series.