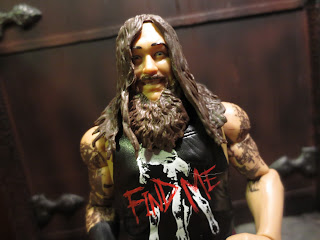 It's time for another review of a Bray Wyatt figure!  He's part of the 55th series of figures in Mattel's basic WWE line and was actually a figure I picked up on black Friday. While I've thus far skipped all of the basic Bray Wyatt figures, this one has a unique and more expressive head sculpt that really separates it from the previous figures. Bray's also decked out in the in-ring attire that he's worn throughout the past year a few times. Bray Wyatt arguably builds the best hype in the WWE right now and is definitely one of the best presences in the WWE, but he really needs some wins to make him seem more intimidating. He needs to really crush some opponents, you know? Anyways, let's get right into this look at the Eater of Worlds, right after the break... 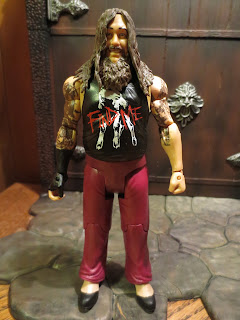 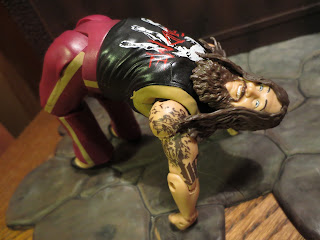 *While the basics have more limited articulation, it's actually not that limited. While the hips are simple swivel joints, the arms are plenty articulated. It's a nice compromise between the exceptional articulation of the Elite line and the need to be budget conscious. Plus, you can still kinda do Bray's spider walk. Spider Bray, Spider Bray, wants to give the world a taste! 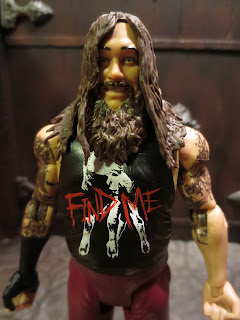 * Here's the main reason I bought this figure: The new crazier, more disheveled looking headsculpt. I like it. It has a great look to it as the hair looks much stringier and sweatier than on previous figures. This is definitely more of an in-ring Bray and, while it's not a perfect look for a spider walk version of Bray Wyatt, it's much closer than what we've had. The wider eyes and crazy grin are also different from the more laid back headsculpt Mattel has been using. This is Bray getting down and dirty alongside his followers, not sitting back and watching them do his bidding. 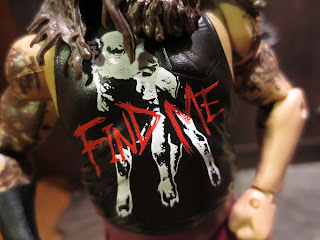 * Bray's shirt looks great! It's the black t-shirt with a lamb on it and the words "Find Me" in an angry, scratched font. Mattel always does a really find job when they do printing on the WWE figures and Bray's shirt is another hit. It doesn't say "Seducer, Accuser, Destroyer" on the back, though, just FYI. 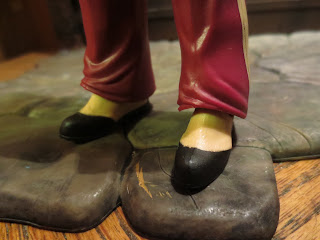 *While Bray's boots look awesome in the Elite line, they really fall apart here. There's no way Mattel is giving them a snake skin pattern in the budget conscious basic line and thus we're stuck with a weird tan. It's the same tan as the stripe on his left pants. At first, I though he was wearing loafers and no socks. Bizarre, huh? 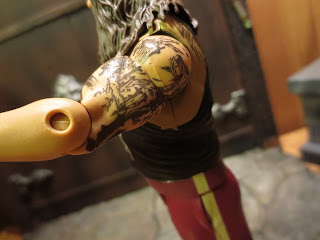 * The basic figures are definitely done on a tighter budget than the Elite figures and thus Bray's tattoos are nowhere as impressive as the Elite versions. That's par for the course, really, but I am disappointed by the random paint slop. Bray's tattoos on his back actually run over onto his shirt and there are a number of places where the paint for his skin bleeds over onto his clothes. You can see it in the picture here along the edge of his shirt sleeves. 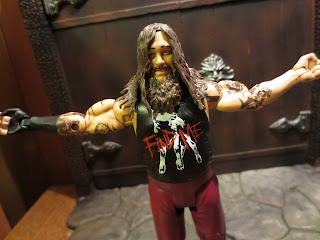 It's no secret that I love Bray Wyatt and the Wyatt family, so I'm always down for a good action figure of one of the crew. While I'm most looking forward to a WWE Elite version of Braun Strowman and Bray's newer outfit with the horned hoodie that I can't seem to find a good picture of anywhere, I'm glad to have another version of my favorite. He's got the weak paint issues that many of the basic figures have, but he's still a pretty solid toy. I'm giving him a Good and a 1/2 rating. For $10, he's a pretty fun toy. If you have any spare worlds that need eating, pick this guy up and let him do his stuff.

I've written a ton of other Mattel WWE figure reviews, including: