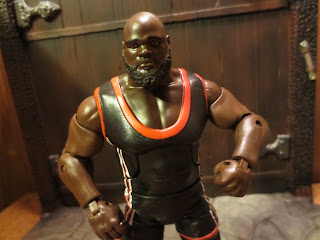 Who is ready for another WWE Elite Collection review! I promise you that I haven't become an all wrestling review site: I'm really catching up on a number of figures I picked up in October that I put off reviewing due to all of the Halloween and Re-Halloween reviews I did. Today I'm looking at a figure from a year or two pack: The series 32 Mark Henry. I like Mark Henry just fine and while he's not a major player these days in the WWE, the guy still manages to show up pretty often. What really sold me on this figure are the accessories. Besides being a large figure, Mark also comes with an electric razor, the bottom set of ring steps, and a break apart table. That's a crazy amount of accessories! I actually found Mark Henry on sale on Amazon for less than $20 (maybe around $15?) so I felt like I got a real steal. How's the figure, though? Well, join me after the break for a review of the World's Strongest Man... 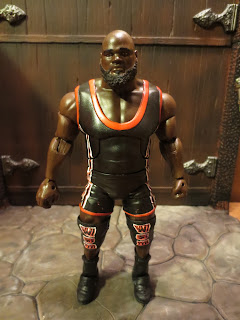 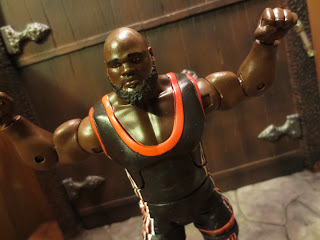 
*Mark Henry has all of the articulation that you've come to expect with the WWE Elite Collection. His articulation feels a bit more limited due to his stouter, stockier build, but he's still a pretty fun figure to play around with. 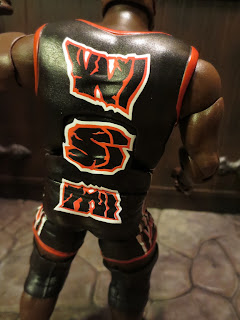 * Mark Henry is decked out in a black and red outfit with some cool red, black, and white details. Across his back and on the front of his kneepads (which are separate pieces that sit over his double-hinged knees) are the letters "WSM" which, obviously, stands for World's Strongest Man. I'm not sure how anyone can declare Mark Henry the World's Strongest Man; I mean, I wasn't in the competition or anything, so it's not like everyone got to compete. Granted, the man is an Olympian and has won tons of medals (things I  have not accomplished or achieved) so I guess I have no problem with his title. The logos look pretty good and are neat and clean. 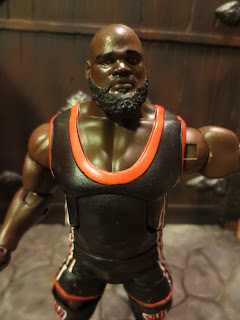 * Look, it's Mark Henry! Mark Henry's appearance is captured here and his build and epic beard are nicely captured. He looks great and there's some great detail work on his outfit. It definitely looks like there are some folds and wrinkles in different places. 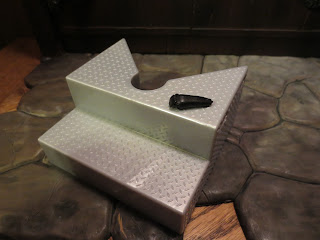 * The key element of this figure that I just love are the accessories, and first up I'm looking at the razor and the steps. The electric clippers are an interesting accessory which I'm guess came from a specific storyline that I'm unaware of or are a reference to Mr. Henry beginning to shave his head around 2013 or early 2014. The ringside steps are even cooler, though. They're massive and feature a great texture that looks pretty similar to what you see people get hit with on television. 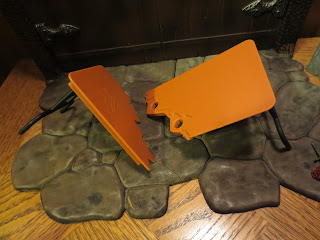 * The third accessory Henry comes with is a two-piece table. While it's a bit odd that it's emblazoned with the WWE logo, it does have the appearance of you standard, basic banquet table. The legs easily fold in and out and it actually feels pretty sturdy. 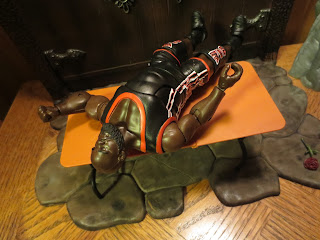 *So, while I like the table, what's really odd about it is that it stays together well. Really well. So well, in fact, that when I tried to slam a figure through it nothing happened. The two halves really clip snap together tightly. Seems kind of odd to have a break apart accessory that you can't really utilize. Hopefully we'll get some WWE Elite Dudley Boyz figures soon with redesigned tables to slam figures through. 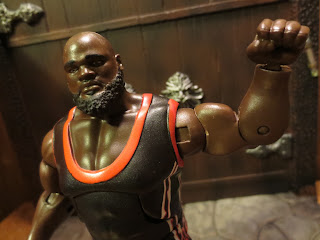 * I don't know if it's due to Henry's larger size or because he has a more unique physique but this figure feels different than most other WWE Elite figures. He feels really odd and almost hollow. It's a bit bizarre and definitely makes him feel not as solid as the other figures in the Elite Collection. 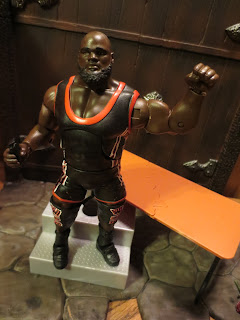 Who knows if we'll see another Elite Collection Mark Henry figure anytime soon? Since he can still be had for a fairly reasonable price (possibly even less than retail) you might want to try and grab a Mark Henry while you can. The figure isn't bad at all but the number of large accessories definitely help send this figure to the next level. With the accessories included, I definitely think this is a Great purchase. There are some flaws here such as the too-sturdy table and Mark's torso feeling overly hollow, but the sheer amount of what you get here definitely helps me to still feel pretty like this is a very solid set.