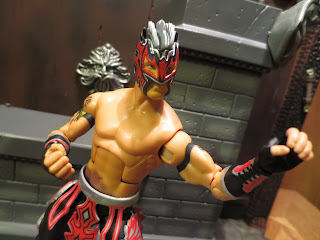 That's right! It's time for a review of Kalisto from Mattel's WWE Elite series 42! I recently made an order from Ringside Collectibles and picked up three of the newest figures that I was looking for to add to my roster. Kalisto is an incredible athlete and hands down one of the most entertaining WWE Superstars to watch in the ring. He's agile, energetic, and seems like a really nice guy to boot. He's currently the United States Champion and 1/2 of the tag team duo The Lucha Dragons, one of the most exciting tag teams out there. Ready for a closer look at Kalisto? Then join me after the break... 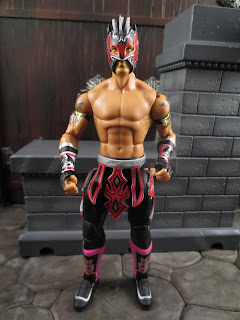 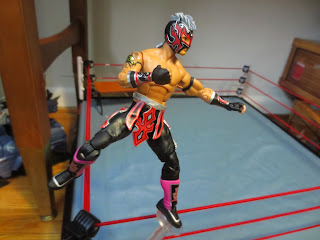 *Kalisto really needs to be able to move. If you're never seen this guy in action, check out this video real quick as it'll help you to appreciate the guy's moves in about 2 minutes. Pretty darn amazing, right? Fortunately, Kalisto is as well articulated and sturdy as any other WWE Elite figure. The articulation is plentiful, it feels right, and you're not going to have to worry about breaking this guy. Get out there and have fun pitting this guy against Spider-Man. 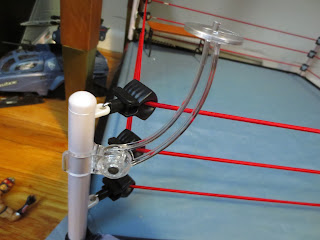 * To help make the most of that incredible articulation Mattel included an "aerial action stand" with Kalisto. This stand has been included with other figures in the past but it's a cool item and fits Kalisto's style quite well. I have an Elite scale ring (this picture might be the first I've posted taken in my world famous hobby room) and it fits nicely on the posts in a variety of different ways. It's sturdy and has a hinge at the base where the clip rests. 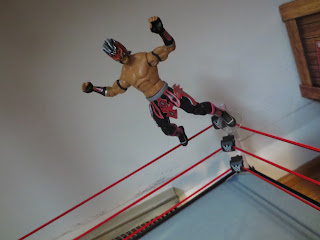 * Here's Kalisto in action! The peg on the aerial action stand is nice and tight in his foot peg and really allows for some fun ways to display the Most Agile Warrior in the Ring! 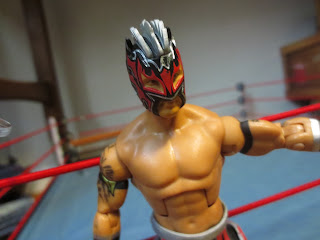 * You should notice that since Kalisto is a smaller guy compared to most other WWE Superstars, you'll be pleased to know that Mattel made him not only sufficiently shorter than others but that he has a much slimmer frame, too. 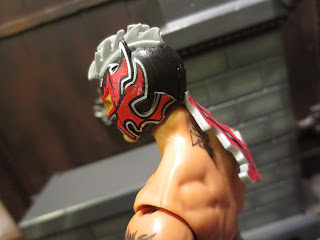 * Is this mask wicked or what? Again, I think Mattel goofed up when they labeled this outfit as his ring attire from Wrestlemania 31 (since I don't think he was there) but it definitely matches the look of this specific attire. The paint and printing is really sharp and the "spikes" on top look really menacing. Nicely done! 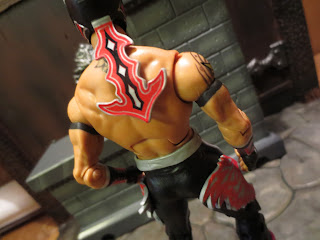 * Turn Kalisto around and you can see the cool tail hanging down from the back of his luchador mask. It's incredibly cool looking and made from a soft, pliable plastic (there's a tatoo of a cross with wings underneath it that you can see poking out a bit in the picture). From this picture you can also see the wings on the sides of Kalisto's pants. They're made from the same softer, pliable plastic as the tail on his mask and they look stinking amazing. 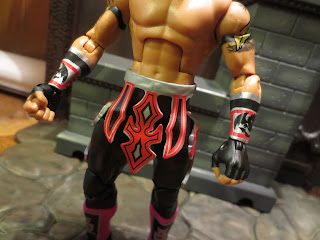 * Check out the paint work on Kalisto's gloves and belt! Seriously, more incredible paint work and detail. His boots are slick, too, as they have the little dragons on them with a pink border. The team at Mattel who works on the WWE figures seems to be much better than their DC and movie property teams as they really put forth some effort to capture details such as this. 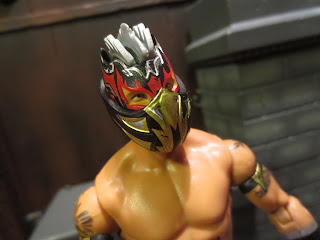 * Kalisto does not sound like Bane when he talks but if you put this entrance mask on his face, you can pretend that he does! This is a simple piece that fits over his head and stays on quite well, giving you an extra display option for your figure. 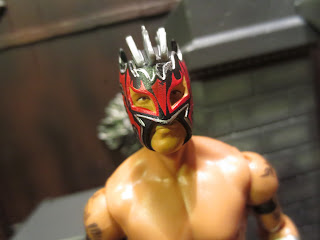 * My only complaint about this figure is that the face beneath the mask looks a little under-detailed. It's not bad but considering the work that Mattel has shown they're capable of on this line, I think Kalisto's facial details could have been a bit sharper. 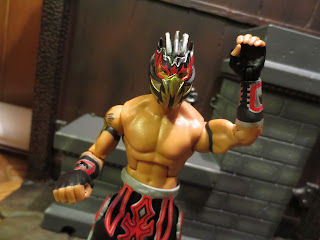 * I'm a big Kalisto fan and this figure absolutely delivers! He's well articulated, awesomely painted, and totally captures the look and feel of Kalisto. Not only does he have a cool alternate look thanks to his entrance mask being removable but the action stand he includes really does allow for some cool poses if you own any one of Mattel's numerous wrestling rings. This guy is an Epic figure and definitely deserves a place in your roster. Now I just need to track down a fitting Sin Cara to accompany him in is in-ring exploits!


I haven't reviewed any other Kalisto figures in the line but I have reviewed plenty of other WWE figures from Mattel, including: