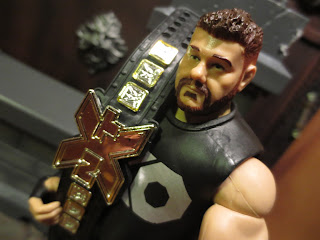 I'm not sure anyone had a bigger impact on the WWE in 2015 than Kevin Owens. The guy is a phenomenal talent in the ring, great on the microphone, and sells any storyline or feud he's a part of. He's angry, aggressive, obnoxious, the current WWE Universal Champion (as of my writing this review, and apparently now best friends with Chris Jericho. He's also finally an Elite figure from Mattel. We've had some basic of KO over the past year but we knew an Elite was coming, so I managed to convince myself to wait. Let's take a closer look at the the Prizefighter, Kevin Owens, after the break.... 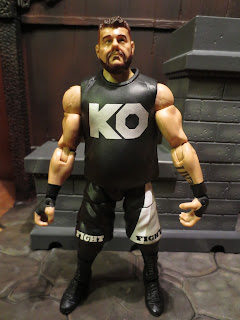 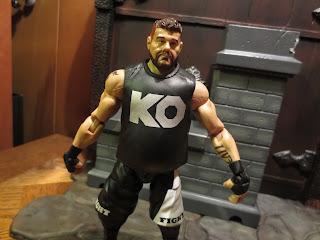 * At some point there was some discussion that Mattel was directed by the WWE to give Kevin Owens a more muscular build. How much Mattel stuck to that ca be debated because, overall, I think Mattel did a pretty decent job of capturing Owens here. I love the outfit they chose for him here, too. This is a pretty good first Elite Kevin Owens figure overall and should help fill a slot on the roster on your shelf. 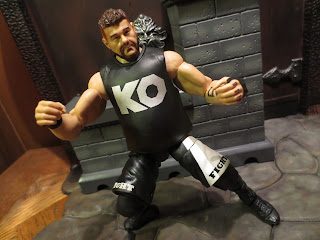 * I really like the articulation on Mattel's Elite figures and, despite having a larger frame, Owens still manages to be a well articulated figure. Whether you're doing running cannonballs, moonsaults, or the Pop-Up Powerbomb, you'll have fun with this figure. These guys are really sturdy and well made. 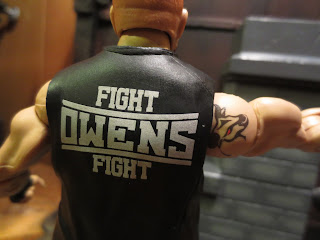 * From this pic of Kevin's back you can see both the "Fight Owens Fight" print on the back of his shirt and the Taurus tattoo on his right shoulder. 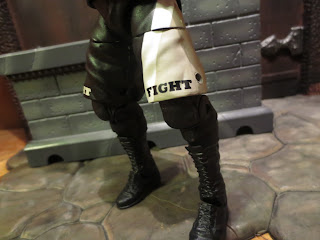 * Owen's shorts and knee pads are looking good here, too. I'm really sure what's new here and what might be reused from other figures but I'm digging it. The "Fight" lettering on each pant leg is also as crisp and clean as you'd expect from a WWE Elite figure. 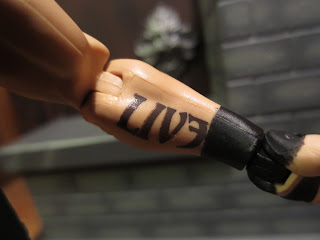 * And another crisp, clean piece of work? The "LIVE" tattoo on Owens' left forearm. I like the backwards "e" here. Is it "Live" or "Evil?" It's a matter of perspective, really. 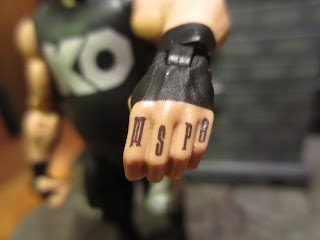 * I'm always impressed by the small tattoo details Mattel captures on the Elite figures. On Kevin's left hand are the letters MSPB which apparently are his grandfather's initials. Cool stuff and they look nice and clean on the figure. 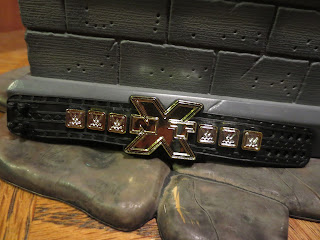 * Kevin Owens comes with the NXT Championship belt which he carried around with him on his earliest WWE appearances last year. He lost the belt to Finn Balor at the Beast in the East event but KO's the current Universal Champion now, so he's done OK for himself. This is a cool accessory although I'm surprised he didn't come with an Intercontinental Championship too, as it's mentioned on his packaging under his career highlights. 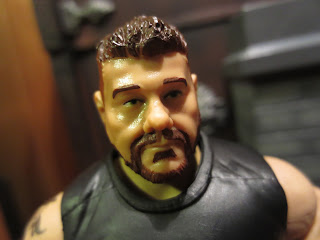 * So... here's the tough thing about this figure: Does it actually look like Kevin Ownes? Kind of. I think there's some good work here, particularly in the eyes, the brow, and the nose. The cheeks look too large, though, and the facial hair just doesn't look like Kevin's. It looks more like John Goodman's beard in The Big Lebowski. This headsculpt is all over the place in my eyes but, fortunately, we know Owens will probably get another figure soon. 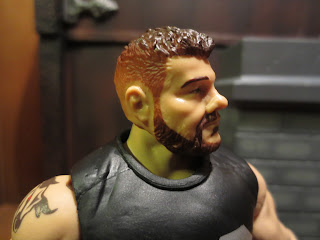 * I'm not wild about the way Kevin Owens' hair is painted. I can appreciate that Mattel tried to replicate the faded look of the buzzed sides of his hair but it just looks a bit odd. Also, the beard looks two neat. During this period Owens had a much less trimmed beard that should been sculpted differently. 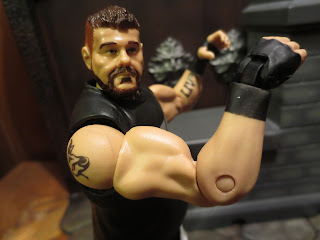 * Check out Kevin's guns: His shoulders just do not match his biceps. This is a case of Mattel mixing and matching parts and it just doesn't work. It's not so much that Owens isn't that toned as it is that those arms just do not even seem to fit on this figure. What happened here? 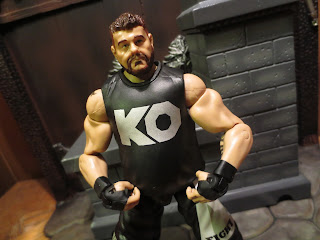 While the likeness isn't perfect, Kevin Owens is a really good figure. Elite 43 is a pretty strong series of figures and while he may not be the best figure in the series, KO definitely seems to be the most popular figure thus far. The head sculpt is off but the rest of the figure, including the tattoos and his ring attire, are excellent. This guy is a Great addition to the roster. Now Mattel just needs to make a Universal Championship to go with him. I'm cool if it comes with a new Finn Balor, too. I'd buy another Finn in a heartbeat.


I haven't reviewed any other Kevin Owens figures yet but I have reviewed plenty of other WWE Elite figures, including: