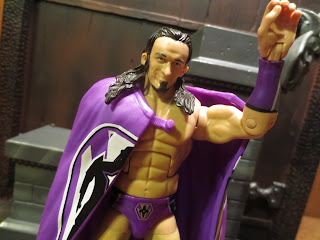 Yesterday I looked at Kalisto, the most agile warrior in the WWE and today I'm looking at Neville, the Man that Gravity Forgot! Elite series 43 is double packed with high flying, acrobatic Superstars, isn't it? While this Neville figure is decked out in his outfit from his WWE debut in March 2015, it's actually still current as he hasn't changed his look much yet. He may be sporting a new look soon, though, as he is currently out with ankle injury, but for now this is a pretty up to date figure. Neville has made a name for himself on the main WWE Roster as one of the most fun Superstars to watch. He's acrobatic, agile, and does some incredible aerial maneuvers. He also took part in a pretty cool match last year when he teamed up with Stephen Amell to face Stardust and King Barrett at SummerSlam, so I guess you could put him with your Arrow figures if you wanted to. Ready for a closer look at this new high-flying Superstar? Then join me after the break... 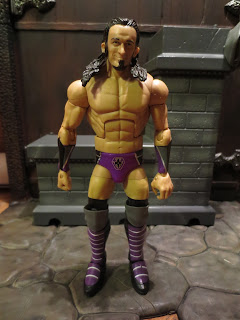 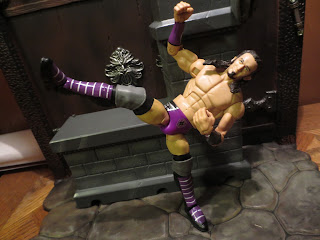 * The one thing that gets a little old with reviewing Mattel's WWE figures is that their articulation is incredibly consistent. Of course, that's not a bad thing at all as that means Neville is well articulated, sturdy, and a ton of fun to play with. Have fun making this guy fly around your ring like a British Spider-Man. 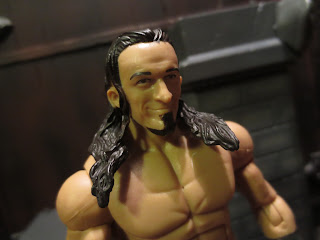 * This is Neville. Seriously, this is a pretty good likeness. Neville has very angular features (my wife says chiseled might be a better word, but I'm not so sure) and had a lot of character to his face and Mattel just nailed. Neville kind of sounds like and looks like a wizard, and to be honest I totally dig it. If he comes back with a wizard styled gimmick I'd be down with it. 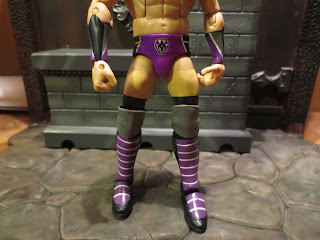 * Neville's outfit is pretty cool. I tend to wear a lot of black and purple myself so I'm absolutely digging Neville's outfit. The purple and white stripes on his boots look really cool and the bright purple trunks definitely make a statement. Also, take note of his cool gray knee pads which are indeed separate pieces. 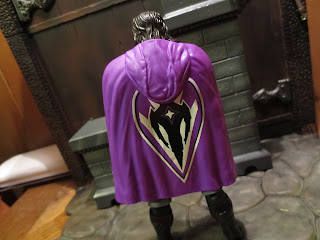 * Neville has an incredibly cool entrance and Mattel has included his entrance cape to help you reenact it. I'm going to talk about the cape in the negatives because honestly I'm not a big fan of how it turned it out but I do want to point out the cool printing on the cape. The purple color this is molded in and the black and white logo just look stunning. 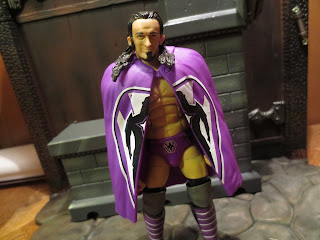 * Mattel made a terrible choice to not give Neville an actual soft goods cloak. Imagine how cool this would have been if he could pose wearing it, perhaps even utilizing the hood? That would have been a stellar accessory. As it stands, this thing barely lets the figure move his arms, something that I consider highly unfortunate. Yeah, it's his entrance cape, but you really cannot even reenact Neville's entrance with it. 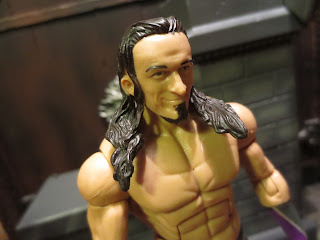 * Neville's hair seems to be a little too firm as it stands up a bit from his shoulders rather than laying flat over them. Not sure if this is due to the way he's packaged, a design choice, or too much hair product, but It looks a bit off in person. I guess it's not terribly noticeable in person.

*I kind of wish Neville came with one of those cool aerial action stands that Kalisto came with as it really works for his in-ring antics, too. 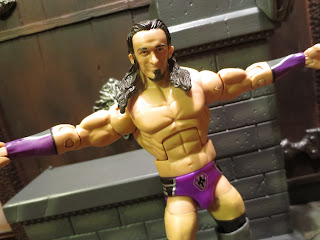 Neville is one of my favorite Superstars active right now and I'm really pleased that this is an excellent figure of him. He's an incredible new talent and is totally deserving of being included in the Elite series so soon. Unfortunately, his cape is really poorly done. As I looked as pictures of Neville while writing this review I was absolutely reminded of how dynamic Neville looks in his cape, making it very unfortunate that this Elite is stuck wearing this like an outer shell of armor. The cape really hurts the score here but the package overall still gets a Good and a 1/2. I have a feeling that Elite 42 is going to be fairly tough to find due to many brick and mortar stores still being overstocked on a few of last year's figures (my local Wal-Mart is overrun with Bad News Barrett and Wyatt Family Daniel Bryans) and the first Elite appearance of three extremely popular current wrestlers new to the Elite series (Kalisto, Neville, and Xavier Woods). Good luck tracking this guy down and, when you find him, tie something heavy to him so he doesn't float off. Gravity tends to forget about him, you know.

I have not reviewed any other Neville figures yet but I have reviewed plenty of other WWE figures from Mattel, including: