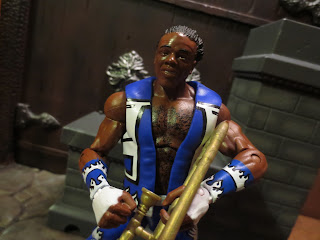 Guess where I'm going to be tonight? Watching WWE Smackdown live in South Carolina! Since I'll be watching the New Day live tonight, I figured I'd give you the pleasure of reading a review of one of your WWE Tag Tag champions: Xavier Woods! The New Day is without a doubt one of my favorite parts of the WWE right now and I'm excited as anything to get to see what they'll be up to tonight! I'm going to jump right into this one pretty quickly so eat your Booty-O's, gather up a little unicorn magic, and clap your hands as you get ready for this review of the Elite series 42 Xavier Woods in his ring attire from last year's Elimination Chamber. Ready for a closer look? Then join me after the break... 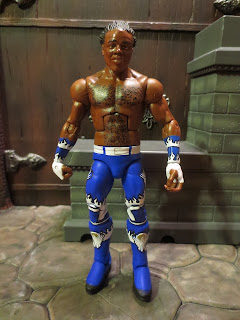 Accessories: Vest and Francesca the trombone. 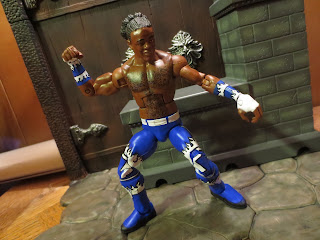 *  I'm glad that Mattel is so consistent with their WWE figures. Like so many other Superstars in this line Xavier Woods is ready for action. He's sturdy, well articulated, and just plain fun. Whether he's fighting, dancing, or playing the trombone to power up his team, Xavier Woods can get it done! 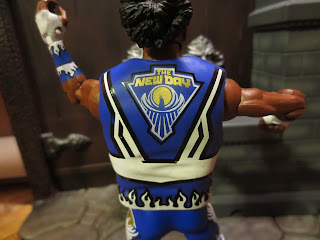 * That vest looks awesome, doesn't it? The printing on it is incredible. To get the entire New Day in this outfit you'll have to pick up the upcoming Kofi Kingston from Elite 43 and a Big E which is surely coming down the road. As it stands, Xavier Woods might be the best dressed guy on your shelf. 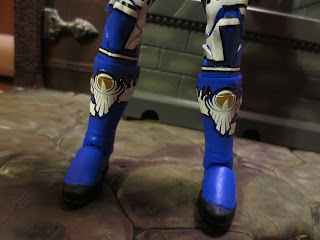 * The rest of the outfit is pretty inspired, too. You've got some awesome logos on the boots, the pant legs, and some great trim on the gloves. The printing and paint apps are just incredible and far more intricate than we're accustomed to seeing on a mass market figure. 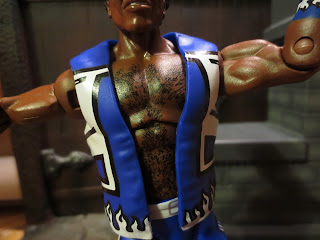 * How odd that this is a positive but I think that Mattel did a really good job on the figure's chest hair. I mean, chest hair painted on can look really weird, but this actually looks normal. It's a small detail that I'm not sure I would have missed if it were gone but I'm glad Mattel included it. 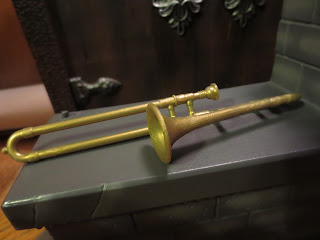 * How cool is it that Xavier Woods comes with his trombone, Francesca? One of the best things about the New Day (along with their entrance, Big E's dancing, and their team tactics) is the fact that they keep coming up with crazy stuff that's just really fun and wins over the audience. My wife finds it obnoxious but I love the fact that Xavier Woods uses the trombone to "buff" his teammates and inspire them. It's an incredible gimmick and really has an old school feel to it! 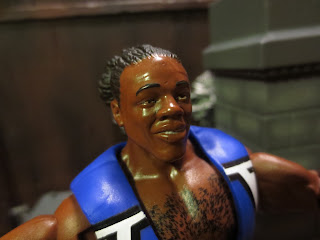 *Xavier Woods was my most anticipated Elite series 42 figure but I have to say that I'm disappointed with his headsculpt. First, the right eye doesn't seem to be painted correctly and looks a little bit wonky. Do you think Mattel was going for this expression? Second, I'm just not sure that it looks that much like Woods. The New Day Battle Pack set nailed the likenesses of Big E and Kofi Kingston, so hopefully we'll get another Xavier someday. 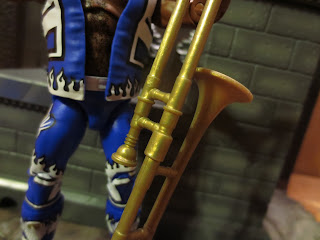 * Francesca, unfortunately, feels a little flimsy. She seems to be molded from two separate pieces and something about this just makes the trombone feel like it's going to snap. I'm not sure if the intention is to recreate Chris Jericho's destruction of the instrument but I wish this accessory were a bit sturdier. 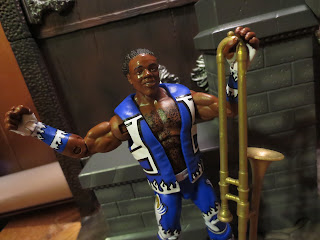 If you look at Xavier Woods from a distance, the headsculpt doesn't become such an issue and you're still left with an incredible outfit and a pretty nice looking trombone. Despite some flaws, this is still a Great figure with some incredible paintwork. I love the printing on this outfit and while I'm anxious to complete this particular set of New Day outfits, I'm really looking forward to the current blue and pink "Unicorn" outfits and the WrestleMania 32 Super Saiyan outfits someday making it into the line. They've just got to, right? We need plenty of New Day toys in the future as they have such incredible gimmicks and colorful outfits that it would be a shame to not have them available on toy shelves everywhere. Imagine a three pack of the Super Saiyan New Day packaged in a giant box of Booty-O's: Doesn't that sound like the best action figure three-pack ever?


This is the first figure of Xavier Woods I've reviewed although I did review the New Day Battlepack that came with Kofi Kingston and Big E! I've also reviewed a ton of other WWE action figures from Mattel, including: