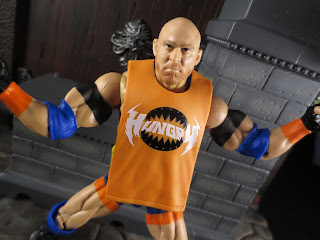 Hungry for some more WWE review? Then let's take a look at Mattel's newest Elite version of Ryback from WWE Elite series 41. This is my first Ryback figure and he's sporting the Big Guy's colorful duds from Wrestlemania XXXI when he competed in the Andre the Giant Memorial Battle Royal. He didn't win, though, but he did get somewhat of a push last year when he won the Intercontinental Championship at Elimination Chamber and held it for 112 days until Kevin Owens defeated him at Night of Champions 2015. Sometimes I really like Ryback and sometimes he kind of leaves me cold. He's a solid mid-carder, I guess. Anyways, let's take a closer look at this figure, shall we? Join me after the break... 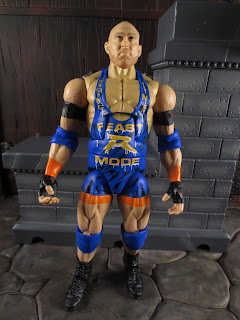 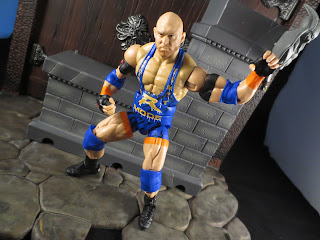 * Sturdy. Well articulated. Fun as heck to play with. Those are just a few of the words that can describe Mattel's WWE Elite figures. I love these toys! They're just great action figures, plain and simple. Ryback is an excellent toy and tons of fun to play around with as you let him smash and bash your other figures. 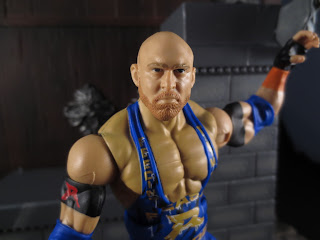 * While Mattel often misses on their likeness for female characters in the WWE, they nail the male performers almost perfectly. This is Ryback, plain and simple. The beard looks good, the expression is perfect, and even if you showed me this head completely divorced of the body or any and all context, I think I'd still know exactly who this was supposed to be. 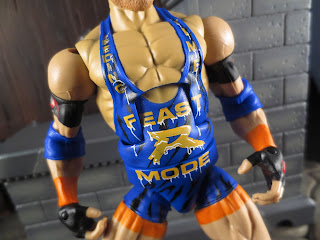 * Ryback's singlet stands out. It's bold and blue with orange highlights, dripping letters, and the words "Feast Mode!" Pretty cool stuff. I'm really impressed by the number of paint apps and tamp stamps used here. The blue and orange color scheme reminds me of something, but I can't quite put a finger on it. Let me think for a minute... 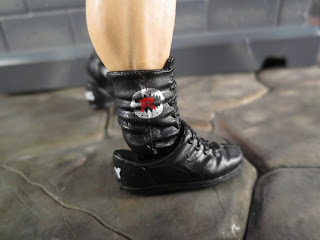 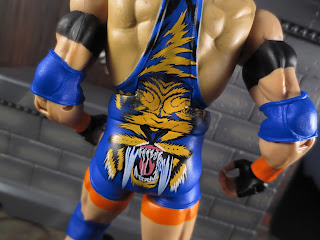 * Oh my gosh! Seeing this massive tiger on the back of Ryback's outfit, I think I know what his outfit colors remind me of: Some of the later G.I. Joe Tiger Force figures! That's incredible! Throw in Sergeant Slaughter and Mattel's making more 6 inch G.I. Joe figures than Hasbro. If that long rumored G.I. Joe Black Series line doesn't get revealed at SDCC 2016, at least you can team Slaughter and Ryback up! 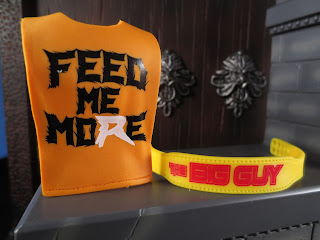 * Ryback comes with two accessories which you can gear him up with: One of those T-shirts with no sleeves or sides that he likes to wear and a weight belt. The weight belt is bright yellow with bold red letters and clearly lets you know that Ryback is "The Big Guy." I also dig the printing on the shirt. I love the Feed Me More slogan (I love the Feed Me Smores slogan even more!) and this looks pretty impressive. 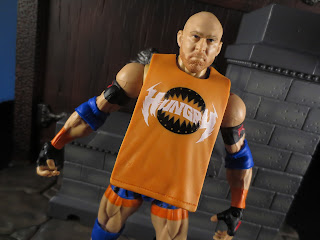 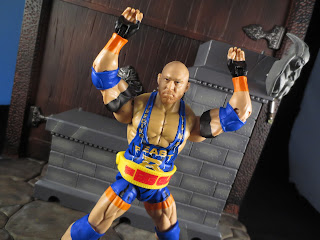 Considering the strength of the sculpt and the incredible paintwork, I think it's pretty easy to see that Ryback is an incredibly well done figure. While he's not doing much in the WWE at the moment (he's not on the injury list right now like everyone else, is he?) this figure is still worth picking up. I love the awesome color scheme and the great accessories. This is a Great and a 1/2 figure and a solid addition to the WWE Elite series!


I haven't reviewed any other figures of Ryback but I have reviewed plenty of other WWE figures from Mattel, including: