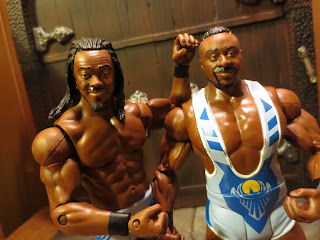 Whether you chant "New Day Rocks!" or "New Day Sucks" I can almost guarantee that, if you watch wrestling you have an opinion on The New Day. While these guys are heels, I have to say that I find them heels that I sometimes root for just because of how awesomely crazy they can be. Today I'm looking at one of the new WWE Battlepacks from Mattel that features two of three members of The New Day: Kofi Kingston and Big E. While I have a decent number of figures from Mattel's WWE Elite Collection, these are the first basic figures I've picked up. What do I think about them? Read my thoughts after the break... 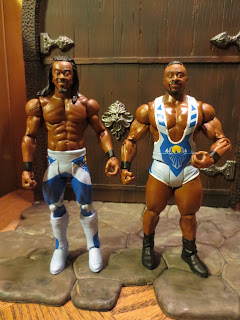 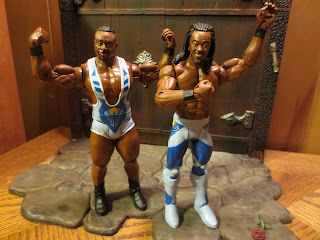 * The articulation on these guys is... really pretty good! Considering that the basic figures are 1/2 the price of the Elite figures, I'm pretty impressed that the only joints they're missing are the ball jointed hips, swivel thighs, double hinged knees, and lateral rockers on the ankles. These guys still have a lot of movement and feel as durable as any other figure in the line that I've looked at. Not bad at all, actually. 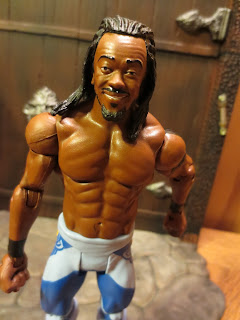 * I'm pretty sure this headsculpt for Kofi Kingston has been used before but it's not bad. It might be just a bit caricatured but if you're familiar with Kofi then you should recognize him right away. I'm not sure this hairstyle was ever paired with this particular outfit, but it's still not a bad figure, particularly for one from Mattel's more basic range of figures. I like the tattoos on his back, too. They're not pictured here but they look pretty impressive. 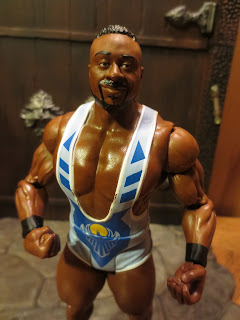 * Kofi looks pretty good but Big E steals the show here. Mattel nailed his classic strongman physique and he looks pretty imposing. He definitely has that classic, barrel chested look to him. The expression on his headsculpt is absolutely perfect and really nails his character. Big E just seems like a fun guy and the headsculpt is really the reason I decided to jump in and pick up this two-pack. 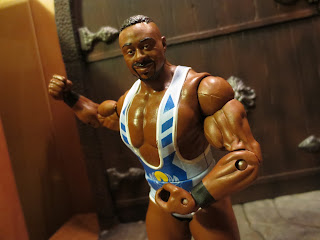 * I gotta say again that I just love that expression on Big E's face. He's totally ready for some dancing! I love figures with great expressions! 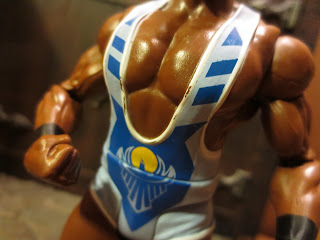 * The worst part about these figures is that there is a lot of paint slop on them. It's small stuff like the edges of the outfits and the places where the light and dark blue meet, but it adds up. If you can scope these out in a store before you buy them you might have better results than me. 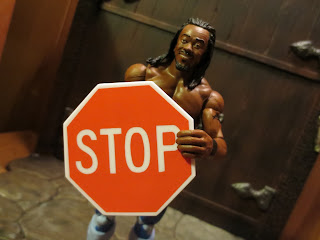 * The set comes with a....Stop Sign? I tried to look but I couldn't find any time when The New Day used a stop sign in any way. It's not a terrible accessory but it seems a bit light for a two pack. I wasn't expecting entrance gear (as that's kind of the trademark of the Elite Collection) but something a bit more useful would have been cooler. 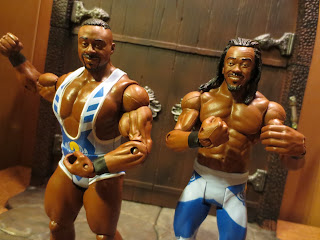 This was my first experience with the WWE basic figures and I have to say that I'm actually pretty impressed. While they're not as fully articulated nor as well accessorized as the Elite Collection figures, they're pretty cool at half of the price. For about $20 you get two figures that are more well articulated than many other figures on retail shelves these days. This is a great two-pack and should hold collectors over until The New Day inevitably makes it's way into the Elite Collection. This really is a Great set.

I've reviewed a number of the Elite Collection figures, including: