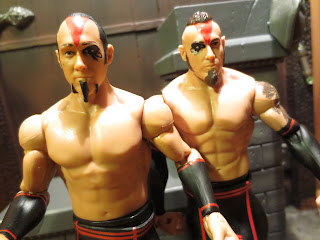 Today I'm looking at another Battle Pack from Mattel's WWE series of action figures: Konnor & Viktor, AKA The Ascension! While they're not one of the most prominent tag teams in the WWE right now, The Ascension definitely has a unique look that hearkens back to The Road Warriors. While these are "basic" figures, meaning they have less articulation and entrance gear, who knows if we'll see ever see The Ascension in Mattel's Elite series. While they had a tremendous run in NXT, Konnor & Viktor haven't exactly had a stellar run in WWE. Currently they're teamed up with Stardust as part of The Cosmic Wasteland but they're not getting that much focus. I watch the condensed Hulu versions of Raw and SmackDown and I can't remember the last time I've seen these guys on there. Still, they're cool looking figures. Ready for a quick look at Konnor and Viktor and some helpful tips for telling them apart? Then join me after the break... 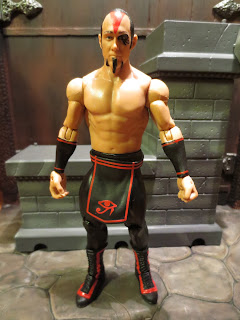 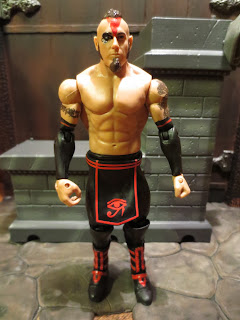 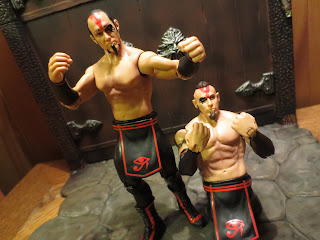 *While the non-Elite WWE figures (most fans call them "basics") have less articulation than the Elite series, they're also have the price. Still, these guys are pretty well articulated. While they only have the basic leg joints, their arms are as articulated as any other figure and their ball jointed heads work great. If every basic toyline had this much articulation, I'd be pretty pleased (these are much cooler than Hasbro's 5poa Star Wars figures). 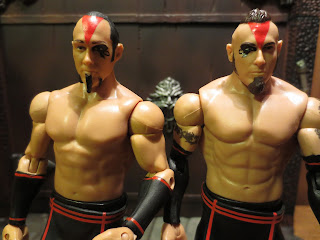 * These guys are pretty well sculpted. I like the fact that Mattel even gave them different torsos ton reflect the differences in their builds and height (Viktor is the shorter guy on the left while Konnor is the taller guy on the right). The head sculpts are good and have some clean paint applications. The details on the facepaint look pretty good and mesh perfectly with the sculpts. 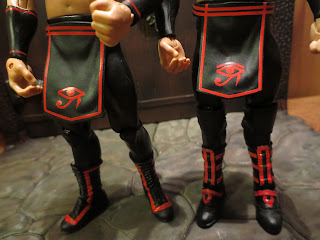 * The Ascension's black and red outfits look really sharp. The paintwork is nice and tight for the red details on both the boots and the smocks. Since The Ascension originally had some sort of Illuminati backed gimmick or something, so their eyes and outfits are adorned with the Eye of Horus. They have two different versions of the Eye of Horus on their smocks. Konnor's is the more traditional version with the line over the eye while Viktor's is a bit simpler and is lacking the line over the eye. While I found both of these versions of the Eye of Horus depicted in images, I couldn't find any screen capture of Viktor with this simplified version of the symbol on his smock. Whether this is a mistake or extreme attention to detail from one particular appearance by Mattel I cannot confirm; it really doesn't look bad, though, and does differentiate these guys a bit more. 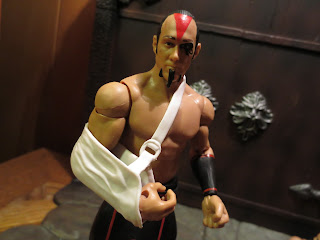 * The WWE Battle Packs tend to throw in a random accessory or two like crutches, parking cones, or a stop sign. While I wish Mattel had skipped that here and just given Konnor and Viktor their entrance armor, the included arm sling isn't that bad. It looks OK if you have a figure whom you want to sit off to the side with an injury. I'm pretty sure this is a random accessory and not related to The Ascension in any way, so you could always give it to Cesaro since he's out with a torn rotator cuff at the moment. Come back soon, Cesaro! 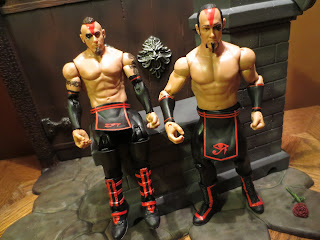 * I'm guessing this was an oversight on Mattel's part (or a cost cutting measure) but Konnor has knee-pads on while Viktor doesn't. This isn't a one off problem as I've see other collectors whose figures had the same problem. Poor Viktor! He's going to have some bruised knees! 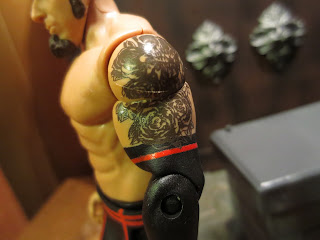 * Here's another weird tattoo glitch like the one I noticed on the series 55 Bray Wyatt: Konnor's tattoo actually covers not only his entire left bicep but it also extends onto his sleeves. I don't have any ink myself but I'm pretty sure tattoos don't do that in real life. Oh, and there's another way to tell Konnor and Viktor apart: Konnor has tattoos on his shoulders and Viktor doesn't! 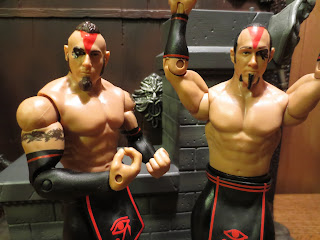 Lately Mattel has been putting out some pretty good Battle Packs. This is the first chance to get The Ascension and it's nice to pick both of them up in one purchase. While they're not burning up the WWE right now, these guys definitely add a cool presence to your tag-team collection. Heck, they could even be used as some sort of bizarre acolytes in any 6-7 inch action figure collection. I could totally see He-Man fighting these guys, couldn't you? Konnor & Viktor turned out really well and I'm giving them a Great rating!


I've reviewed plenty of other WWE figures from Mattel, including: