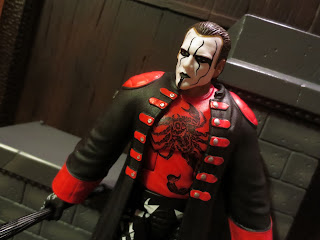 Tonight, May 22nd, is WWE Extreme Rules 2016 so in celebration I just had to throw up a WWE review! Today I'm looking at an older figure I actually just purchased fairly recently through a Ringside Collectibles sale: Sting! Sting was a WCW guy for years and years who wound up in WWA and TNA, not signing with WWE until 2014. He first appeared at Survivor Series 2014 and debuted on RAW in January 2015 where he feuded with the Authority, fought (and insanely lost to Triple H) at WrestleMania, and fought a pretty good match against Seth Rollins at Night of Champions 2015. Unfortunately, he was injured in that match and it pretty much seems like it has ended his in-ring career. He was inducted into the Hall of Fame this year, which is pretty cool, and of course now that he's an official WWE player Mattel is cranking out the Sting figures. This one was part of Elite series 39 which was released at the end of last year and is the first modern Sting figure from Mattel (the others have been Flashback figures). Ready for a meeting with the Icon? The Franchise? The Vigilante? The Man They Call Sting? Then join me after the break... 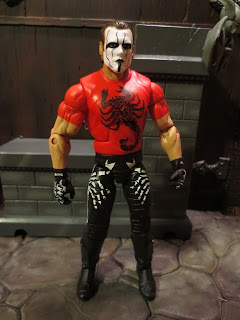 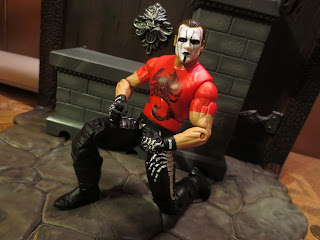 * I really think that Mattel's WWE Elite line just might be the toyline most consistent in quality of any other mainstream lines. The articulation is always sturdy, well thought out, and functional. These guys look great and are a ton of fun to play with. They're not as articulated as some of the high end 1:12 scale lines like One:12 Collective or S.H. Figuarts, but they blow away nearly everything else at retail. 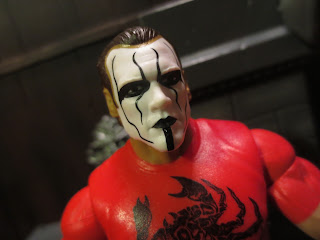 * It's no wonder they call Sting "The Icon": He is certainly one of the few wrestlers that can truly be called iconic since, even if you're not someone who follows wrestling, Sting's distinct face paint is instantly recognizable. Mattel did a great job of recreating it here. Steve Borden was 55 when he first debuted with WWE and you can actually see a bit of age in the sculpt, which really works for this character. I They nailed Borden's hair, too. It's quite excellent work. I've seen some comments that the goatee is a bit off (it is basically the same color as the black face paint) but it seems OK to me. 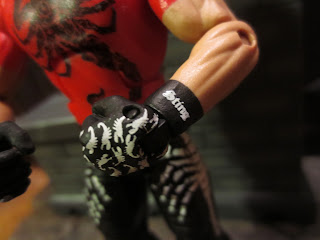 * These gloves are incredible. I love the level of detail on these! They've got tons of little scorpions on them so you know that they'll sting when they hit you and they've for Sting's name on them so you can identify the thrower of the punch that just sent you for a loop. Very convenient. 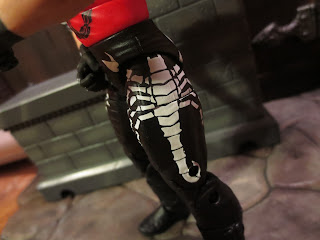 * Could you pull off black, padded pants with scorpions on your hips while wearing a red t-shirt with a giant scorpion on it? I didn't think so! Sting is one of the few people who can do that, I'd wager. It's petty cool and, again, the printing is really near and clean. It's amazing the work in printing logos and details like this Mattel does in this line compared to many of their other lines. They just do this so well! 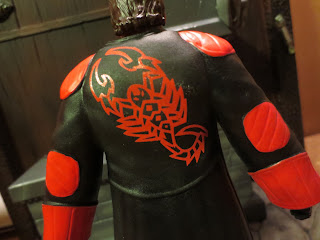 * The back of the jacket looks really cool. Again, Mattel the excellent stamping process Mattel uses comes through with a crisp, clean image of a scorpion on it. This looks pretty awesome and definitely helps the figure stand out amidst a collection of WWE figures. The fairly elaborate outfit and wicked red and black color scheme are pretty awesome and very different from what most modern Superstars wear. 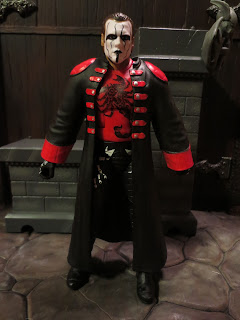 * One of the eternal arguments among toy collectors is always going to be cloth outfits versus plastic outfits. I'm fine with some plastic accessories but for a figure as articulated as Sting, it's a shame that his jacket really limit's him. Rather than the coat being part of the articulation it's a separate hard rubber piece that covers the entire figure. His arms are permanently stuck at his side while wearing this, which is rather disappointing. This was definitely a figure who warranted a cloth coat. He would have been incredible that way! 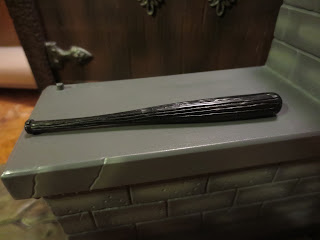 * Sting comes with his iconic baseball black baseball bat...except it looks like it's made of wood. Sting never used a wooden bat, did he? I thought he always used a metal bat (a Louisville Slugger, right?). This seems like either a detail Mattel simply missed out on or they just decided to go with a baseball bat mold they already had on hand. It's not a bad accessory; it's just not Sting's. 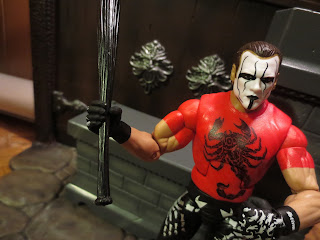 * I'm not sure if Sting should have had a tighter grip or his baseball bat should have had a thicker shaft but it's tough to get him to hold this piece tightly. You really have to get him to hold the bat almost halfway up before he can get a firm grip on it. Maybe this was intentional since WWE seemed to have him shy away from using his bat for anything other than pointing at stuff. 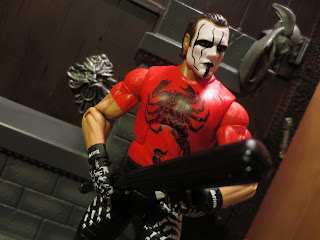 This is an incredible looking figure but making his jacket from a solid piece of plastic really seems like a poor choice to me. It just makes this ghostly vigilante so much less interesting than he should be. Figures who have dynamic coats and capes are so fun to pose and it's a shame that we can't do more with sting while wearing his very cool coat. He's a Good and a 1/2 figure and probably still worth picking up if you want a modern Sting figure, but he's not one of the best Elites out there. While Mattel's currently focused on his blonde surfer dude look, it's likely we'll see Sting again in this line and hopefully he'll have some improvements.


I haven't reviewed any other figures of Sting, but I have reviewed the ReAction Horror Series figure of Eric Draven, AKA the Crow. He totally inspired Sting, right? If that doesn't count in your book then check out one of my dozens of other WWE reviews: