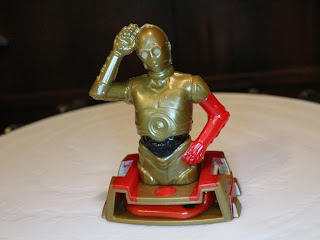 I'm a sucker for any candy product that also gives me a cool minifigure. While I like Yowie the best, Kinder Joy is a pretty cool product, too.  Kinder Joy has released a number of licensed Kinder Eggs such as Frozen, Marvel, Disney Jurassic World, Disney Princesses, and now Star Wars. Last week I was at the store grabbing something before Halloween (I really don't remember what) but I discovered these at the register and had to snag one. I'm a sucker for anything Star Wars and some candy with a Star Wars toy included was absolutely irresistible. When I opened my Kinder Egg I discovered C-3PO inside, although I almost didn't recognize him because of the red arm. Let's take a quick look at this mini C-3PO after the break... 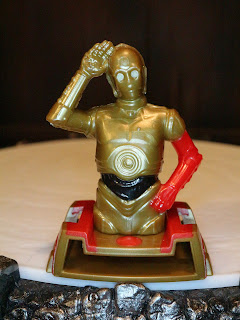 Includes: Figure, base, projectile, and target. 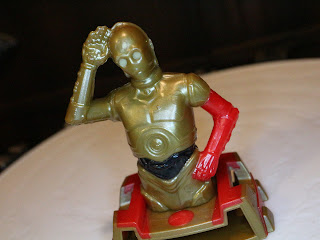 * For a mini-bust smaller than 2 inches (including the base) this is a pretty nicely detailed figure. This is clearly a version of C-3PO from The Force Awakens as he has the red arm rather than the traditional gold one. While the paint is pretty sparse, the likeness is quite good with fairly crisp detail. What pose is he making, though? Is he confused? Saluting? Maybe suffering from the droid version of a headache? It's not a usual pose but it does fit Threepio quite well. 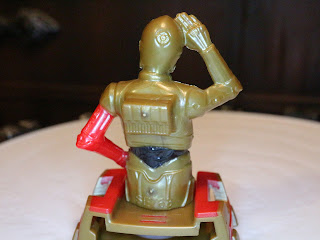 * The nice detail continues on the back. Again, not much paint but lots of sharp, crisp sculpting. 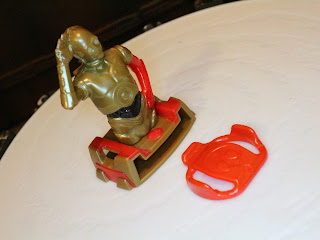 * The purpose of the base with the figure (besides keeping the figure standing) is to serve as a projectile launcher of sorts for the included projectile (that's the red disc like object in the pic to the right). I'm a bit confused by how this is supposed to work; it is either intended to be flicked with your finger or you "push" it through the smaller side of the stand to launch it out. It's an interesting idea but it just doesn't work very well either way you try it. Also, C-3PO is about the last character from Star Wars you think of when launching missiles comes to mind, right? 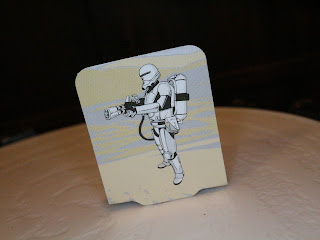 * Included with the set is a cardboard target of a First Order Flametrooper.  You just fold down the base and set it up in order to give C-3PO something to shoot at. It's a bit silly, but for some reason I find it charming. 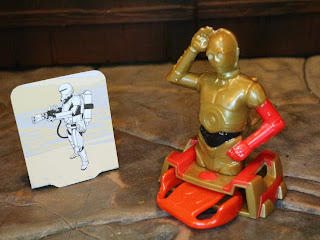 I really wish that these were straight up minifigures or minibusts rather than something with an action feature of sorts that doesn't work all too well. It's a cool concept but the execution is lacking. Still, as just a C-3PO minibust that comes with some candy for less than $2 bucks, I can't see this as a total loss. It's a Good little mini and definitely more interesting that many of the standard Kinder Joy trinkets (the Frozen Kinder Eggs are still the best, though). I don't know if I'll pick up any more, though, as while I like The Force Awakens (all of the figures in this set come from that film) I'm a bit overmerched on it. I could go for BB-8, though. Or Kylo Ren....