Action Figure Review: Hawke from Masters of the Universe Classics by Mattel 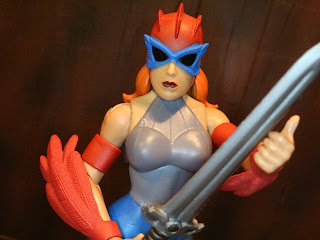 Today I'm checking out another Masters of the Universe Classics figure from Super7's continuation of the line: Hawke. While she's based on her Filmation appearance, Hawke appeared in both the Filmation series and in the 200x MYP series as one of the Avionian Bird People. In the Filmation series Hawke is just a random traitorous Avionian but in the MYP series (and in Classics canon) she is Stratos' heroic sister. Of course, what's interesting about this figure is that she includes an alternate head to turn her into Delora. Delora is Stratos' sister in the Filmation series (she's basically Hawke with blonde instead of red hair) but in the minicomics and various storybooks she is Stratos' wife. Sister/ wife/ random antagonist; makes sense. Hawke has long been one of the most requested figures for MOTUC and while she is very Filmation inspired, Super7 put her in the Collector's Choice/ MOTUC line. She was part of the first series that was released this spring and is definitely one of the figures I had heard some less than favorable things about. Want to check her out a bit more closely? Let's get it started after the break... 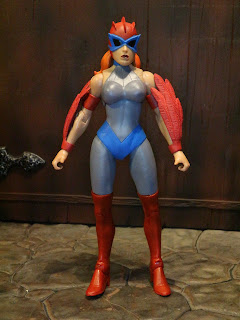 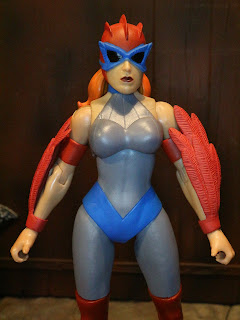 
* Overall I do like the look of Hawke. While I love the Filmation cartoons and the character designs, I'm not always wild about the simple style being translated so directly into MOTUC. Hawke isn't as dull looking as most of the Filmation figures, though, as she does have some sculpted detail on her wings and on the chest of her outfit. The color scheme is pretty nice, too. It's obviously nearly identical to Stratos, but it still looks good with bright, vibrant colors. 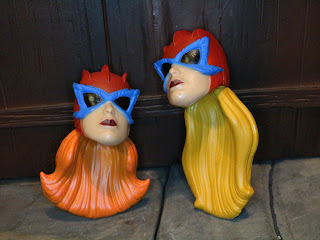 * I'm going to talk about the portraits in a minute (hang on, I'll get there) but I do want to give props to Super7 for offering two alternate heads. If you preordered this set you had the option of ordering multiples of this figure so you would have had the ability to have both a Hawke and a Delora. The two headsculpts are identical except for the hair, as while Hawke has medium length red hair Delora has long blonde hair. 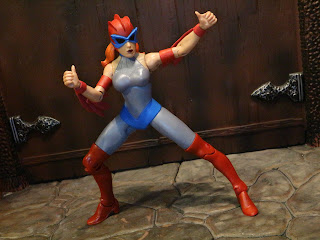 * Super7 has definitely updated the articulation scheme on there MOTUC figures a bit and while Hawke definitely feels a bit "looser" than Mattel's offerings, she does have way better ankle and wrist joints. These are still really fun, well made figures. 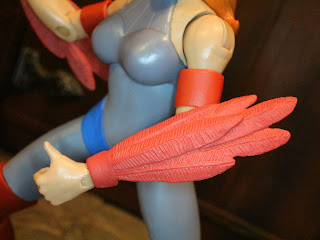 * Hawke's wings are pretty cool. Like Stratoss, they're separate pieces that are permanently attached over her forearms. They can rotate freely, though, which helps in posing. I like that they're more detailed and not just molded with the flat, textureless appearance of an animation cell. 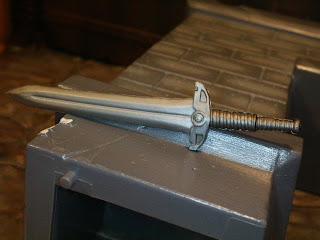 * Hawke comes with a cool sword. I don't know where it comes from but it's a nice sculpt. It could have used a few paint apps, though. 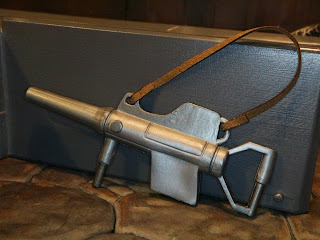 * The figure also comes with this cool "smoke gun" which I believe is intended for Delora's use. It's a cool looking piece but, again, it could have used more detail. I do like the faux leather sling, though. It's large and a bit awkward to wield, but a cool extra nonetheless. 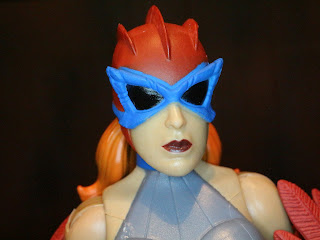 * I am not digging the headsculpt and, since Hawke and Delora are the same head with different hair, they both take the hit. The visible part of the face just looks really, really off. It's almost like her chin is too long or something. I don't know, it's tough to explain. Mixed in with the way the head sets so low, however, it makes for a figure that just doesn't look all that great. 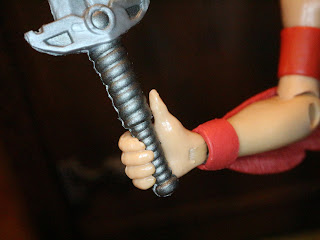 * Why the heck can Hawke not hold the sword normally? Rather than give it a slimmer handle Super7 instead gave the very bottom of the sword a slighter grip. This just looks awkward, right? 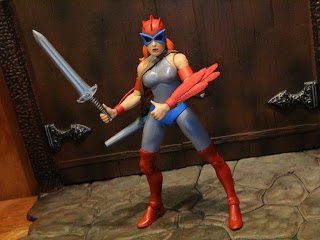 There are a few things I like about Hawke/ Delora but thanks to some of the weak decisions, she's another Eh and a 1/2 figure. Super7 seems to be either be putting out some real winners or some real losers, huh? Seriously, I want them to do well and keep the line going but I feel that with the smaller, more focused line they've been cultivating and with higher prices, they need to bring their A-game every time. Hawke and Delora should have easily been a solid figure but some small yet poor choices and a lack of cool little details made for a subpar entry in MOTUC.

This is the first action figure of both Hawke and Delora I've ever reviewed. For more Masters of the Universe Classics figures from Super7, check out the following:
Granita
Karg
Quakke