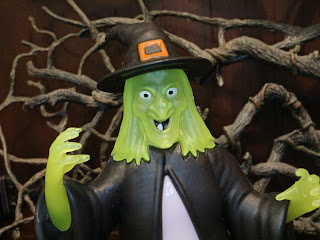 Halloween may have come and gone now but guess what? There's still a lot to look forward too! Candy is on sale, Halloween decorations are on clearance, and we still have next week's Re-Halloween to look forward too! What's that? You're not familiar with Re-Halloween? Then you better check this out! OK, up to spooky speed now? Then let's check out the first toy in our Re-Halloween countdown: A spooky electronic Halloween Witch from DTSC Imports. This actually isn't mine, though. It belongs to my daughter, Aly Fox. My mother bought it for her for Halloween back in 2017 and we really like it. It has lights, sound, and a motion sensor. Aly Fox tends to not turn it off, though, and it has scared me on more than one occasion during a late night trip to the kitchen. I've seen these at many dollar stores, specifically at Dollar Tree. There's also a ghost that is pretty similar (we have it, too). Let's check this Halloween Witch out after the break... 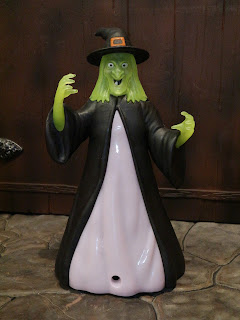 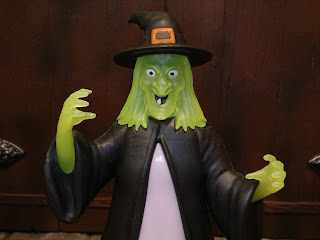 * I like the sculpt on this as it is a great, classic looking Halloween witch. She's got green skin, a lone tooth, and a creepy grin. She's wearing the traditional witch's hat with an orange buckle, too. Oh, and her skin and arms are molded in translucent green plastic. I love it! It's a great looking toy for costing only a $1. 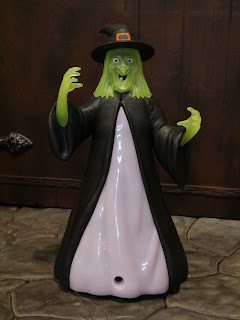 * The Halloween Witch is what we sometimes call a "salt shaker" figure, meaning a figure wearing robes or a cloak that doesn't have sculpted legs. That's OK, though, as it fits the aesthetic here and keeps her standing. You see, this witch has a motion sensor on the bottom. Turn on a light or pass in front of her and she'll let out an eerie laugh and flash multiple colors. 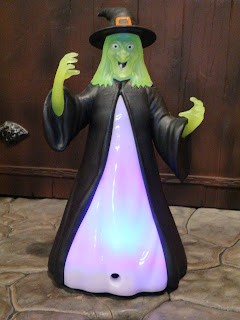 * Here's the witch in action. The lights inside are a mixture of red, blue, and green. There is a switch to turn her off, too, so she can just sit around as a decoration. Turn her on, though, and you can use her to startle random passersby. 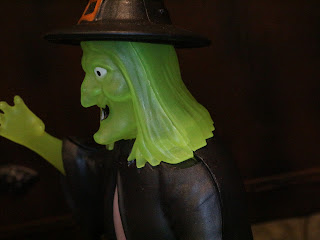 * I know she is only a dollar, but why isn't her hair painted? That should have been pretty easy, right? 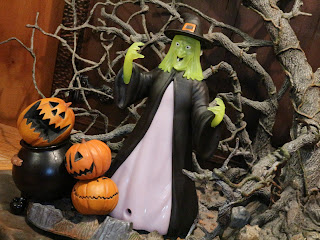 I love inexpensive Halloween trinkets like this! The Halloween Witch from DTSC Imports has been one of my favorites from the past few years. My daughter loves it, too as it looks like the classic witch she has seen in many of her books. It's a cool little decoration and, man, you just can't knock that translucent green skin, can you? She's a Great little pickup and well worth tracking down this week while you're out looking for bargains on Halloween decorations and candy!


The Funko POP! of Lucy Van Pelt in her Witch Costume
The Monster in My Pocket Witch
Elivra in a Witch Costume from Elvira, Mistress of the Dark
The Goth Witch from Goth Hotties
The Imaginext Collectible Figures series 4 Witch
I also picked up the Lego Witch polybag set.
The Funko MLP Trixie Lulamoon
The ReAction Lo Pan is basically a warlock!
Radagast the Brown from the Hobbit is a wizard.
I'm pretty sure the Monsters set by Hing Fat had a witch in it.
This terrible Rita Repulsa is definitely a space witch!
Posted by Barbecue17 at 11/01/2018