Action Figure Review: Wrap Trap from Masters of the Universe Classics by Super7 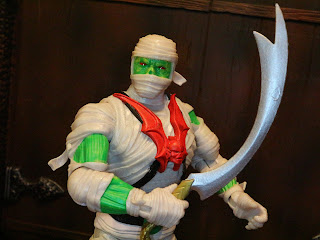 Today I'm checking out the third figure from the second series of Super7's Masters of the Universe Classics figures and I'm thrilled that it is Wrap Trap, AKA the Horde Mummy. Based on a concept drawing by Ted Mayer, the Horde Mummy has been known to the fan community since 2001 when he was first shown to the public in issue #89 of Tomart's Action Figure Digest. He's been one of my favorites unproduced concept characters since I first learned about him and I really am glad that Super7 turned him into a toy. Like Karg, Wrap Trap seems very influenced by Tom Bryski's concept art from Brian Rooney's The Fwoosh article about potential MOTUC characters (they called him Wrapper, but I like the old fan name, Fear-O, better). I'm a sucker for the horror themed MOTU characters and I really hope we get the concept green witch at some point, too. Maye in the soon to be announced Series 3 of the Collector's Club? Let's take a closer look at the horrific Horde mummy, Wrap Trap, after the break... 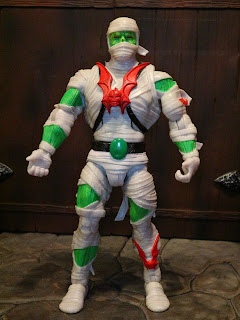 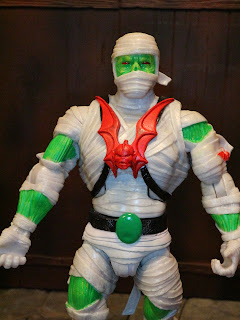 
* The Horde Mummy looks to be a 100% original sculpt. I actually think Super7 has to resculpt most of the standard MOTUC parts anyways, so I guess most of it/ all of it is new, but the Horde Mummy is completely unique. Every piece here feels specific to this figure and matches the prototype design quite faithfully. This is the Horde Mummy we've always wanted! The bandages, Horde emblem, and exposed mummified skin are all wrapped up in an excellent off-white and neon green color scheme. Beautiful! 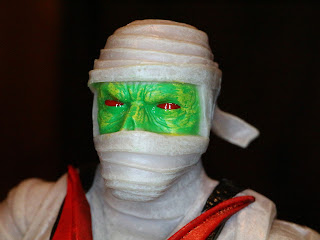 * The headsculpt is quite sinister and definitely leans towards the more realistic side of the MOTUC line. Not realistic as in nuclear green mummies actually exit, but the sculpt feels more detailed and "realistically" styled than some of the other figures. I love the red eyes, the greenish skin with yellow accents, and the shape of Wrap Trap's wrappings. 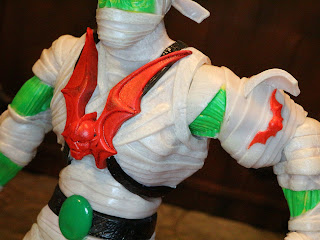 * As if being a neon green living mummy isn't enough, Wrap Trap is also sporting some Horde paraphernalia so you know that he is legit. He has an awesome sculpted Horde logo across his chest (it isn't removable, just FYI, as it is part of the sculpt) and a Horde emblem on his left bicep. I really appreciate the fact that the Evil Horde is good at branding. Skeletor just lets his people do whatever they want. Hordak and King Hsss know the power of a good logo. 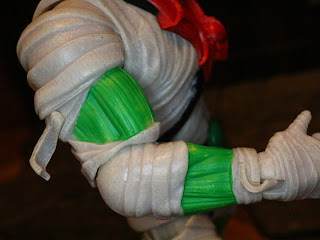 * The way Wrap Trap's mummified flesh is visible underneath his bandages is great. I also love the loose strips of bandage that are hanging off of the figure in different places. He really does have a great sculpt and shows off the excellent work that Super7 is capable of. 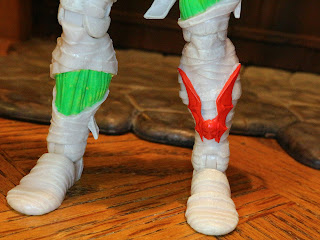 * Not only does he sport Horde logos on his chest and arm but his left logo also has Hordak's familiar emblem. When Wrap Trap kicks you in the face, you'll know who's responsible for sure. 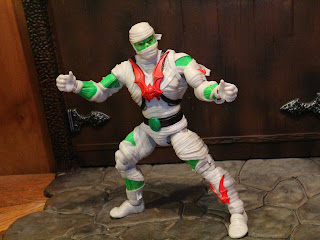 * Super7 improved the articulation on their MOTUC figures by giving most of them swivel/hinge ankles and swivel/hinge wrists. Since Wrap Trap is a completely new sculpt, he also has swivel/hinge elbows (though no bicep swivels), which is different. Not better or worse, just different. He also feels like he's made of a harder plastic. Maybe that helped to make the detail seem a bit crisper? 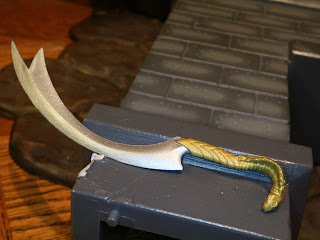 * Wrap Trap includes a khopesh, a curved bladed sword used in ancient Egypt. Not only does the blade look wicked cool but the handle is sculpted to look like a cobra. Battle Armor King Hsss would look slick with this, but good luck getting Wrap Trap to give this one up. He bought it from that store at the mall that also sells sculpted ceramic dragons, incense, and knockoff cellphone accessories and there is no way he is giving it to anyone! 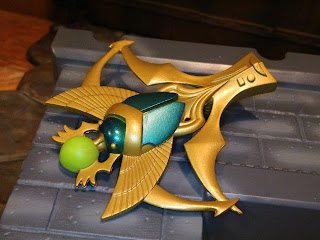 * Since most members of the Horde include a crossbow, guess what Wrap Trap comes with? That's right! A really cool Egyptian (or the Eternian/ Etherian equivalent) inspired crossbow that kind of resembles a crazy ornate scarab. I bet this thing launches some sort of green necrotic energy! I imagine this would also look great with Nepthu, but that punk ain't getting jack off of Wrap Trap. 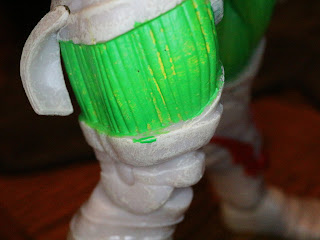 
* Overall I like the paint work here although there are some places where the green skin bleeds onto the white bandages, or where the bandages bleed onto the skin. 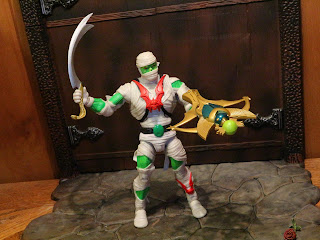 Wrap Trap was one of my most wanted MOTUC figures and I'm really glad to have him. To be honest, it was Karg and Wrap Trap that finally convinced me to give Super7's MOTUC effort a go, and I'm glad I did. Wrap Trap is a really cool figure, but you definitely have to realize you're paying more for these guy than other figures of comparable value. Wrap Trap is still a Great figure but for a figure costing $35 bucks I would have hoped for another accessory or an alternate head to add a bit more value. Still, he's probably going to be responsible for getting Masters of the Universe Classics back on the top 10 list for 2018 this year, so he's got that going for him, too.

This is the first toy of Wrap Trap I've reviewed. For more Masters of the Universe Classics reviews, check out the following: