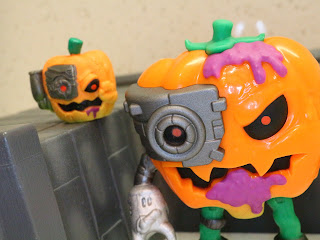 Happy Re-Halloween! Halloween 2018 was filled with some really great stuff, wasn't it? It's been a pretty good one and I'm excited to wrap it up with a look at a pretty cool pumpkin based action figure from the Grossery Gang: Time Wars toyline by Moose Toys. Today we're checking out Power Up Space Jump Pumpkin, a radical cybernetic pumpkin who apparently can travel through time like a gourd version of the Terminator. I actually own a nice handful of Grossery Gang minifigures but this is the first of the larger action figures that I've owned. I believe these are supposed to be powered up versions of the regular minis, and thus these are in scale with those figures (technically, at least). These have been rather difficult to find as the distribution has been fairly limited. They're quite cool though, although I did limit my self to just the Pumpkin since y'all know how much I love anything related to pumpkins. Let's check out the Power Up Space Jump Pumpkin after the break... 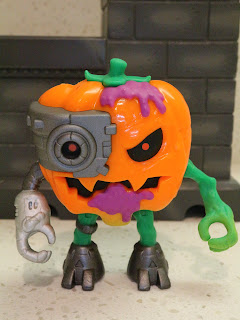 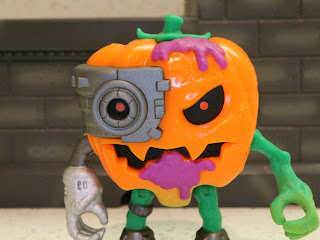 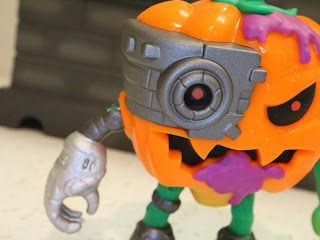 * The cybernetic elements of Space Jump Pumpkin are really cool. The sculpt is very crisp, very clean, and for some reason reminds me of the vintage Playmates Teenage Mutant Ninja Turtles figures. Moose Toys does a great job with these and has really put out some fun, colorful action figures. 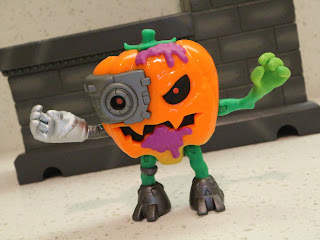 * The articulation on the Space Jump Pumpkin isn't incredibly impressive but it does work well and makes for a fun figure. Seriously, considering these are kind of a modern update to the Food Fighters the minimal articulation is definitely less problematic. It's fun and allows for some play while still making these feel like part of the Grossery Gang line as a whole. 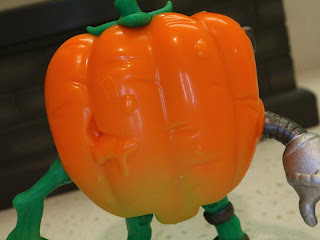 * There are definitely lots of cool little details on the back of Space Jump such as various gashes and dripping pumpkin goo. Again, it's the kind of cool details that made the vintage Teenage Mutant Ninja Turtles line so fun. 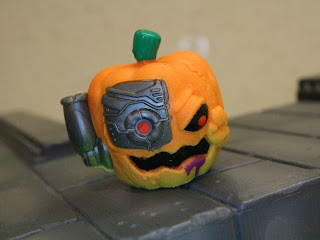 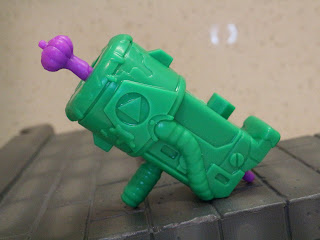 * The Space Jump Pumpkin includes what the package calls a Grot Blaster. It's a large green cannon that fires a purple pumpkin missile. The missile doesn't actually "fire" but instead is really a "flick fire" missile where you simply flick the back of the missile with your finger. It's kind of a cool BFG and looks pretty slick with the figure. 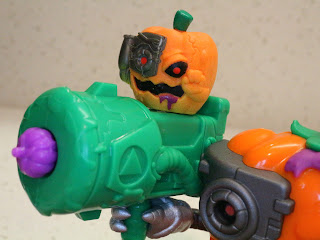 * There's also a cool spot on top of the Grot Blaster that allows you to attach the minifigure on top. It's a fun feature that just seems crazy enough to work... 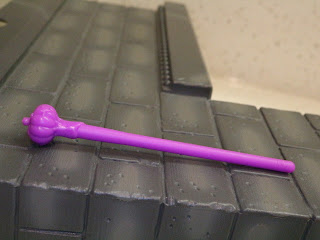 
* I dig purple, don't get me wrong, but shouldn't the pumpkin missile be orange? Also, why not make it a spring loaded missile or at least a missile that uses a tension firing method. 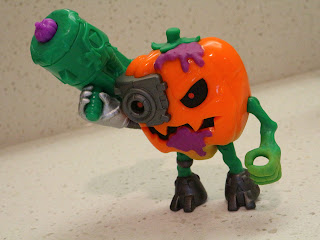 * The Grot Blaster is fairly large so, unfortunately, it's pretty tough for Space Jump Pumpkin to hold. Unless you're having the pumpkin  hold it straight up or down at an angle where it's on the ground, posing him with the weapon is pretty tough. 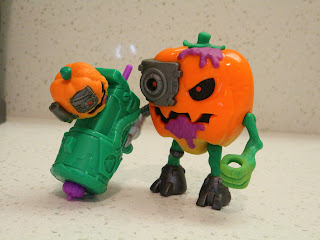 You know what? This is a really cool little figure. Honestly, he reminds me more of an Imaginext figure or a really cool Food Fighters character, but that's A-OK. Considering how cool this guy is, the fact that he includes a figure, and the fact that he's a cybernetic pumpkin with a pumpkin blaster, he's tough to beat. Space Jump Pumpkin is a Great and a 1/2 figure and definitely a figure that should catch your attention if you like pumpkins. Plus, considering he's a pumpkin, you can conceivably leave him out until Thanksgiving. Cause pumpkins are still socially acceptable until around Black Friday, right?