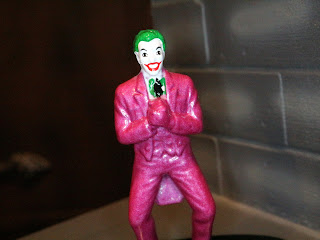 Jada Toys' DC Nano Metalfigs line definitely has a pretty diverse offering of characters from a diverse array of different DC properties: Comics (Pre-Crisis, Post Crisis, New 52, and Rebirth), Movies, TV Shows, and Cartoons. Today I'm looking at the Joker (DC54) from the fourth series of figures. Based on Cesar Romero's portrayal of the Joker from the 1966 Batman TV Series, the Joker adds another figure to a cool little subset of characters from the show that Jada Toys is building (we've also received Batman and the Penguin). Let's take a look at this tiny metal version of the Clown Prince of Crime after the break... 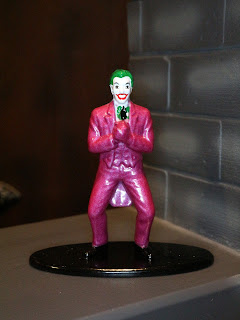 
*First off, I really like the pose. It's very classic Joker and just seems incredibly evocative of Romero's take on the character in the 1966 TV series. You can almost hear him gleefully cackling over some criminal caper. The color of the suit is excellent, too. I love the shade of purple chosen here! 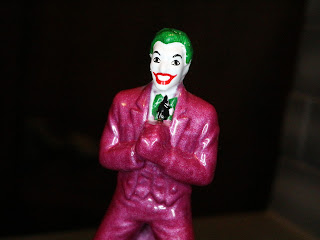 * Check out the work on the paint on the head. Remember: This little guy is only around an inch and a 1/2 tall, so this is some pretty impressive work. His eyes, the smile, the green hair; it's all here! Jada just keeps getting better and better with their paint applications. Also,  do want to point out that they did give him black shoes, which is a really nice touch. 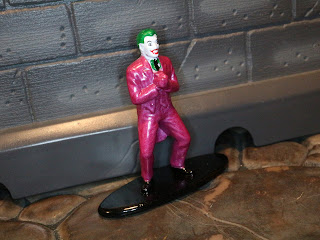 I definitely want to see more unique characters in the Nano Metalfigs but I'll always take a well done Batman villain. The Joker is definitely one of the nicest figures in the line and a fitting tribute to Cesar Romero's incredibly fun and over the top portrayal of the character. Jada did a Great and a 1/2 job here and turned a Nano Metalfig I wasn't particularly excited about into one of my favorites in the series.


If you're looking for more Joker reviews check out the Joker's Funhouse!