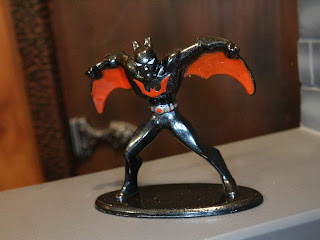 Time for another review from Jada Toys' super cool DC Nano Metalfigs line: Batman Beyond! Batman Beyond is a completely new sculpt that shows off Terry McGinnis in his hi-tech Batsuit from Neo-Gotham. While Jada Toys has offered a lot of Batman variants in this line, I'm technically considering Batman Beyond a new character since, typically, Bruce is not in the suit. While the animated series is quickly approaching it's 20th anniversary the storyline still continues with the excellent DC Rebirth series. Ready for a slick, futuristic Batman? Then join me after the break... 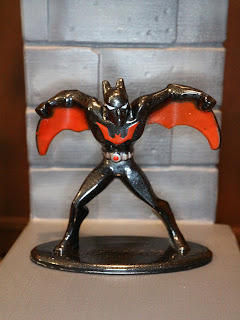 
* Batman Beyond looks awesome. Characters decked out in sleek, shiny suits really work well in this style as the shine of the die-cast metal and the paint give them something extra special. I really dig the pose here, too. It's very dramatic and looks pretty cool. These smaller figures just look so much more dynamic when sporting a good pose! 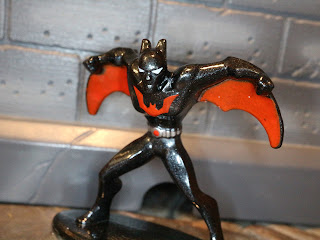 * For being as small as this figure is the eyes look great and the details such as the red on the wings, the batsymbol on Terry's chest, and the belt are excellent. You can even kind of see the details and an expression on Batman Beyond's face. 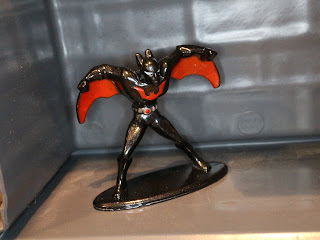 Batman Beyond is easily one of the best figures in the Nano Metalfigs line. The paintwork and sculpt are excellent, as is the design. For around a $1 this guy is a steal and a real treat for fans of the character. Series of the line shows that Jada Toys is continuing to improve things and Batman Beyond is one of the best yet. He's a Great and a 1/2 minifigure!


If you consider Batman Beyond to be another version than check out the Dark Knight Gallery for more Batman reviews! If you're specifically looking for more Terry McGinnis/ Batman Beyond reviews I've also checked out the Total Heroes Ultra Batman Beyond from Mattel.