Something Has Survived!: Velociraptor from Jurassic World: Legacy Collection by Mattel 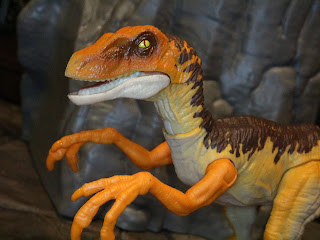 The Jurassic World: Legacy Collection seems to be exclusive to Target. While Target seems to be doing a pretty good job of keeping the toys in stock, it's a shame that these aren't available as it's a pretty cool line of toys featuring characters and dinosaurs from the previous Jurassic Park films in the series, including lots of toys based on the original film. Today I'm checking out a figure I picked up last week at the same time I grabbed Robert Muldoon: The Velociraptor! There are quite a few Velociraptors in the Jurassic World toy line but I really like this one as it looks the most like the classic raptor from the original film. Plus, it features a leaping action feature. Leaping lizards? Not quite, but you get the idea, right? This figure is larger than the Attack Pack dinosaurs and comes in an open air box so you can get a feel for the toy before you buy it. Let's take a closer look at the Velociraptor after the break... 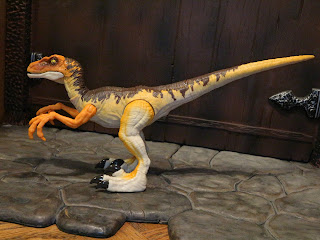 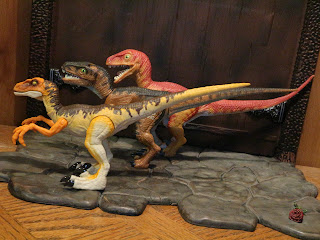 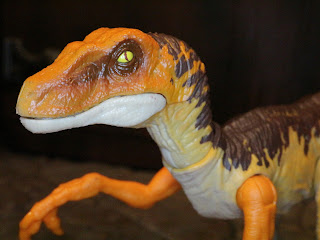 * I love the headsculpt here. The Jurassic Park dinosaurs just have a certain look to them that sets them apart from your average dinosaur interpretations and Mattel did a nice job of capturing that here. She looks very sleek and cunning, particularly with that movable jaw and those keen, intelligent eyes. 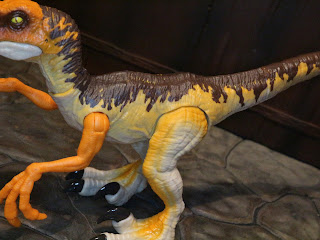 * I love the paint work here. It's not the color scheme of the raptors of the raptors from the original film (the Velociraptor in this set looks closer) but I like it. It stands out quite a bit and gives some nice variety to the line. 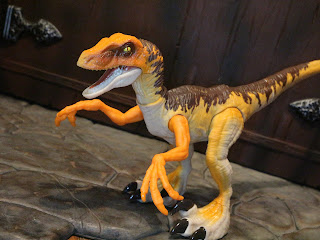 * The articulation is not crazy but it's hard to state just how much fun the swivel/hinge shoulders, the swivel/hinge neck, and the opening jaw make this toy to play with. I love posing and reposing this. Heck, I've actually recently moved this raptor to my bedside table to fiddle around with her at night. My wife's not terribly thrilled with that, but it's a true testament to how much fun this toy is! 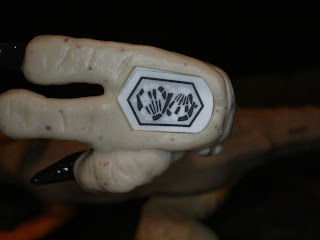 * Remember how the Kenner dinosaurs had that little "JP" brand on them? Mattel's dinosaurs don't have that but they do have this cool little symbol (maybe some sort of DNA-like design?) on the bottoms of their feet. Scan it with a smart phone and you can add new dinosaurs into the Jurassic Facts App. I had to borrow a smart phone from my wife to try it our (I don't have one) and it's kind of cool. It's a collecting/ trivia based game where you collect dinosaurs, learn facts, and take trivia contests. 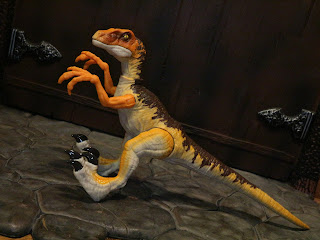 * This raptor has an action feature: Push down on her back so that her legs move forward and release her to make her leap forward. It's not the best action feature ever but it is actually kind of fun to play with and it works fairly well without interfering too much with the look of the figure. 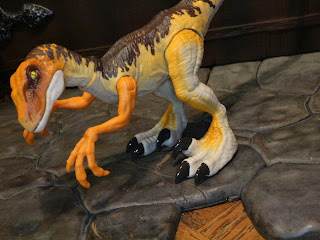 
* The legs are static due to the action feature and the feet are a bit oversized. Not terribly, but still a little bigger than they should be. 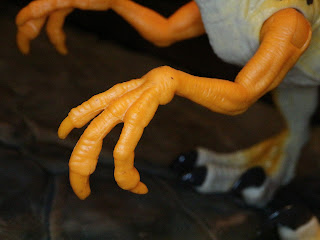 * I really wish the claws were painted black. Instead, they're the same bright orange as the rest of the arm. This feels like a major oversight to me. 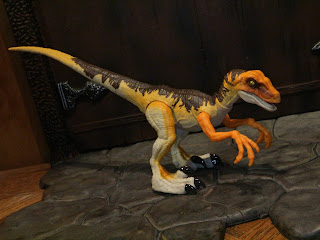 I liked Jurassic World but I'm not sure that I paid any attention to Hasbro's toyline. Mattel's toyline for Jurassic World: Fallen Kingdom definitely has grabbed my attention and, it would seem, the attention of many others. People seem to be digging this line and I can completely understand why. It's fun, colorful, and fairly inexpensive. Who doesn't like dinosaurs? This is a pretty cool Velociraptor and if you're willing to imagine this being a bit smaller than you may expect (or perhaps more true to life) then you can use this with plenty of toylines. It's a Good and a 1/2 raptor and a clever girl, indeed.

If you're looking for more Jurassic World: Legacy Collection figures, check out my review of Robert Muldoon!