Something Has Survived!: Dilophosaurus (Attack Pack) From Jurassic World by Mattel 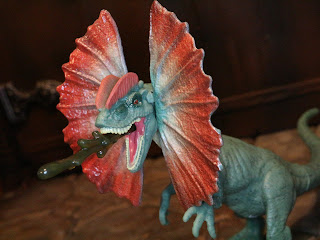 Thanks to a review by Alexx over at Toys and Tomfoolery I had to start searching for Mattel's Jurassic World line, particularly this Dilophosaurus. Mattel has released a lot of product for Jurassic World: Fallen Kingdom (although they oddly are just calling the toyline Jurassic World) and I'm digging these smaller sized action figure styled dinosaurs. As I mentioned in my review of the Hot Wheels Armored Acton Truck I haven't picked up a Jurassic Park toy since 1997 prior to these new releases (other than one of Hasbro's Heroes dinosaurs for my daughter a couple of years back) but I'm really digging these. The Dilophosaurus is one of my favorite animals from Jurassic Park and was absolutely the first one I wanted to hunt down. These figures do remind me quite a bit of the original Kenner figures although they are in a smaller, nearly 1/18th sized scale. The smallest single packed dinosaurs from the mainline are called Attack Pack and they feature some limited articulation. Let's check out the Dilophosaurus after the break... 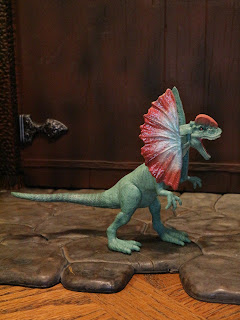 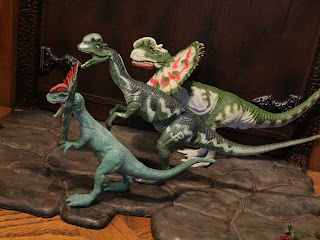 * Here's a quick shot of the current Dilophosaurus  from Mattel next to the original Kenner Dilophosaurus and Electronic Dilophosaurus. As you can see, those were quite a bit larger. Mattel has scaled the new human figures at around 3 3/4ths inches while Kenner's were around 4 1/2 inches. 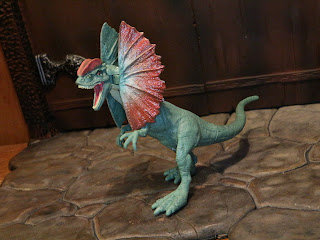 * I gotta admit that I'm feeling a little nostalgic playing with this gal. She's very cool and while not super-articulated, the fact that you can move the arms and legs is welcome. She definitely feels more like an action figure than just a standard plastic dinosaur. 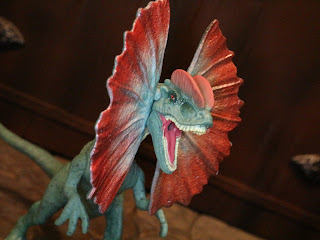 * I love the look of the neck frill. Interestingly, Mattel chose to make the neck frills articulated and thus they slide forward into their up position via a hinge. The frills look great (very colorful) and the hinge system is definitely kind of fun. Not something I was expecting, really. 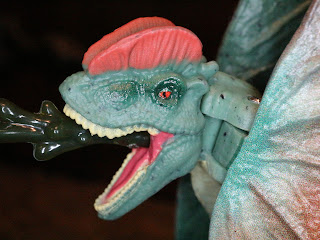 * The headsculpt is quite good. The detail is solid, the paint work fairly clean and sharp, and the sculpt definitely captures the "Jurassic Park" dinosaur look well. 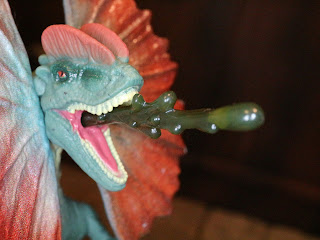 * My favorite part of this figure is the venom spray accessory. It is a simple translucent piece of plastic that plugs into the Dilophosaurus' mouth to make it look like she's spitting venom at her pray. They do call them 'spitters' after all. In the movies, anyways. That's definitely not a feature that the real Dilophosaurus would have had. 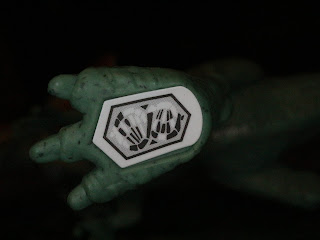 * Remember how the Kenner dinosaurs had that little "JP" brand on them? Mattel's dinosaurs don't have that but they do have this cool little symbol (maybe some sort of DNA-like design?) on the bottoms of their feet. Scan it with a smart phone and you can add new dinosaurs into the Jurassic Facts App. I had to borrow a smart phone from my wife to try it our (I don't have one) and it's kind of cool. It's a collecting/ trivia based game. 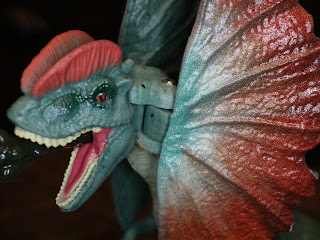 * While I love the concept of the hinged head frills, there is also the reality of the giant hinges on the side of the head. When you want to put the frills down, well, too bad. You just have to pull them back, instead. Maybe a separate "crest" accessory would have been the best solution after all? 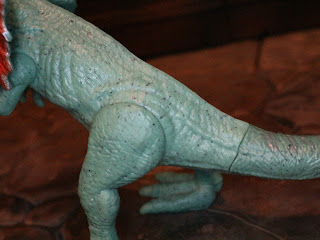 * While there are some black dots mixed in with the green paint, overall the paint job for the body is kind of dull. The original toys were very appealing with multiple different colors and it would have been cool to see Mattel give these a bit more color, especially now that the current trend is to make dinosaurs more colorful than originally thought. 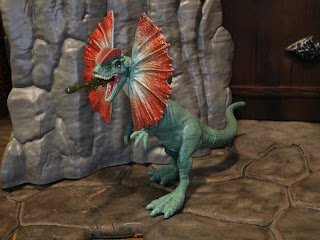 It's not going to float everyone's boat as this is absolutely a toy but I kind of like this Dilophosaurus. While the body might be a but too dull the headsculpt, frills, and venom spray effect are really fun and lively. I do wish that Mattel had gone with a slightly larger scale for the line but I've been playing around with both these and my original Kenner dinosaurs and I'm having fun. She's a fun dinosaur toy and a Good and a 1/2 buy. If you want a Dilophosaurus with brighter colors there is a 5-pack available as well. Now we need a Dennis Nedry to pair her with...