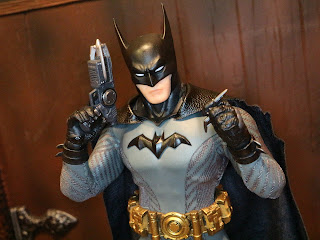 Two things are clear with Mezco and their One:12 Collective line: Mezco loves Batman and collectors love Batman because we are now getting yet another Batman in the One:12 Collective line. While previous releases have been based on specific outfits from The Dark Knight Returns or from the film Batman V. Superman, this is the first Batman figure that feature's Mezco's own take on the character. To be honest, while all of those previous One:12 Collective Batman figures, this was the one I have been looking forward to the most. I like the idea of Mezco taking multiple versions of a character and creating something that is unique while still being familiar. For Batman, however, just one figure won't do as Mezco is planning a "trilogy" of Batman figures from different periods in the crime fighter's career. First up is Ascending Knight Batman which is Mezco's take on a First Appearance/ Year One Batman. I really dig it. It's still clearly Batman and is packed with gadgets, but the gadgets are kind of old school. While he looks modern, he feels like he could have stepped out of another era. I've been reading a lot of 1940s era Batman stories lately (check out the excellent Batman: The Wars Years 1939-1945 and Batman in the Forties) and I can definitely see elements of the inspiration for this figure in those early stories, Frank Miller's Batman: Year One, and even in the Tim Burton directed 1989 Batman. Those are strong sources of inspiration, if you ask me. Mezco has four different versions of this figure available but this is the standard, definitive version (there is also a Toy Fair 2018 all black version, a Mezco Batman Day 2017 Black and gold version, and an upcoming PX exclusive blue and grey version) and the one I'm going to start my reviews with, as I also have the Batman day version. Let's check out Batman: Ascending Knight after the break... 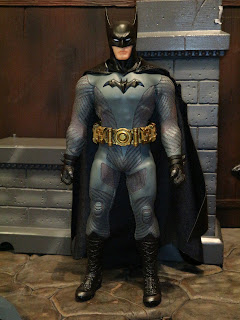 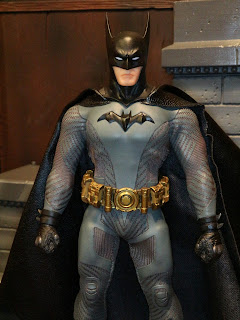 
* I really like the design of this Batman. The grey and black color scheme, the large ears on the cowl, the gold belt; it all just works so well. The headsculpt and cape are pure early appearance Batman and capture the Bob Kane artwork of Detective Comics no.31's cover so well. Other elements make me think of Batman: Year One and Michael Keaton's batsuit, especially the metallic gold belt. Heck, given the material of the suit, you could even argue for elements of the Nolan Trilogy's Batman Begins suit being present. While seeing some purple gloves or a blue lining on the cape would have been cool I can absolutely respect what Mezco has done here. 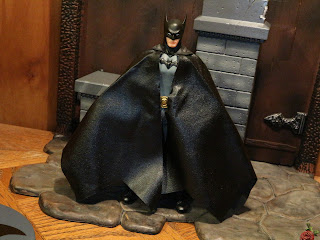 * The cape is made from a pleather like material and drapes pretty realistically across the figure. While it isn't as nice as the amazing capes of the Dark Knight Returns Batman figures, it does look more like a heavy, leather cape. It can both drape behind the figure's shoulders or over them, absolutely bringing to mind the cover of Detective Comics #31. 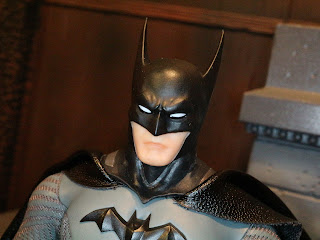 * The headsculpt is probably the piece that connects this the most to being a First Appearance Batman and I think Mezco knocked this one out of the park. It's definitely a different look for a modern Batman figure, but I like it. The "ears" are insanely pointy and look pretty menacing. The white eyes are perfect, too. 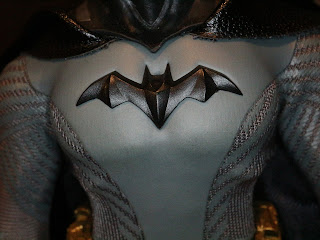 * I love the black bat on a grey outfit. It looks so simple and clean and absolutely works for this design. Not only is this a cool looking bat but it actually is a solid piece that seems to be recessed into the chest a bit. It's very cool. 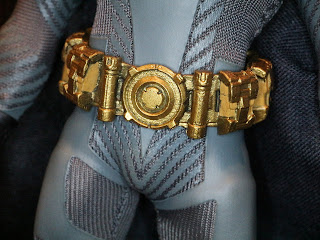 * The utility belt is also a very cool detail. It really reminds me of the Keaton utility belt, although I'm sure other fans will see other bits of inspiration, too. The detailed sculpting and gold color really add a nice something extra to the overall design. It is removable via a hidden peg underneath a pouch in the rear, just for your information. 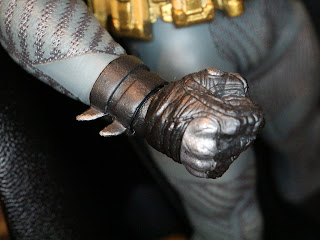 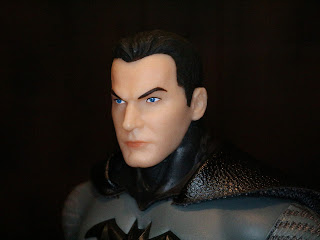 * Ascending Knight Batman comes with one alternate headsculpt: Bruce Wayne! How freaking cool! This is a great amalgam of Bruce as it looks like many of his comic appearances as well as having traces of some of the actors who have played the character over the years. Brilliant! He has a very piercing gaze, doesn't he? 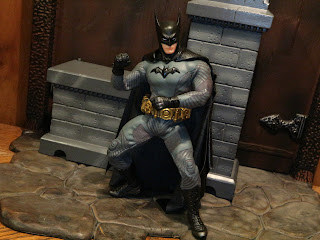 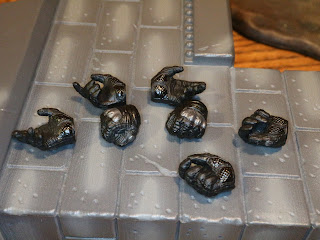 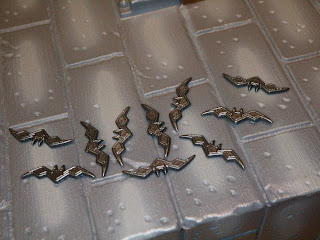 * Ascending Knight Batman comes with ten batarangs. Ten. That's crazy! He doesn't have any way to hold them so I have no idea what the heck he's going to do with all of them, but they're pretty slick looking pieces. Keep one or two for this figure and give some to all of the Batman figures Mattel and DC Collectibles have released over the years with no batarangs. 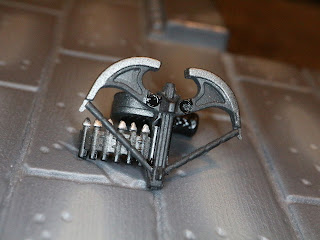 * Showing off that this is an early in his career version of Batman, some of the accessories are decidedly more low-tech than you might expect. I love this small crossbow that fires tranquilizer darts. It even has an attached clip. It feels like a great fit for Batman and would have seemed like a high-tech gadget in the past. It reminds me of the Kenner Batman Crossbow from the Dark Knight Collection that I had as a kid, too. 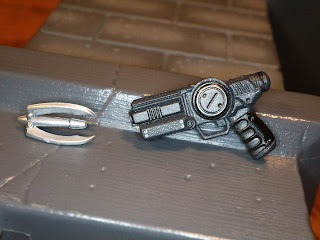 * Batman includes his grapnel gun which has now become one of his most ubiquitous gadgets. The sculpt and paintwork is incredible and it comes with a folded up piton that fits in the barrel for when the gun is in storage. 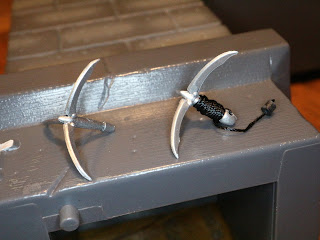 * The grapnel gun has two other hooks as well. There is a grappling hook with the arms spread out (for if Batman is preparing to fire the gun) and a hook with a string for actually posing the figure when firing the gun. The hook definitely won't hold the figure (if it were metal, though... maybe in the future, Mezco?) but it looks cool and you should be able to get some cool poses out if it. 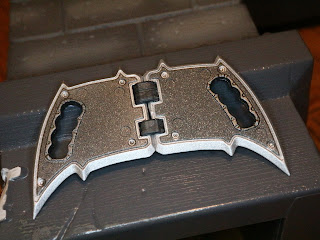 * One of the most peculiar accessories included with AK Batman is the "Heavy Assault Bat Brick." What is it? It seems to be a multi-purpose tool that can be used as a melee weapon for close quarters combat, as a shield for deflecting blows and/ or projectiles, and folded in half so Batman can slide down cables. It it hinged in the middle and has grips on both sides for Batman to wield it. 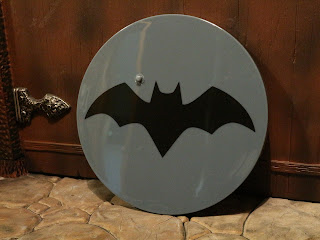 * Like the other One:12 Collective figures, Ascending Knight Batman features a round display base featuring his unique Batman logo. The logo is emblazoned on the base and an off-centered peg helps to keep the figure nice and secure when standing up. 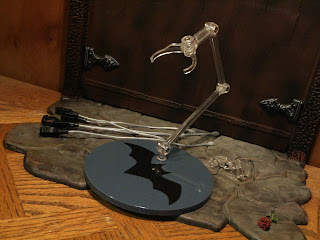 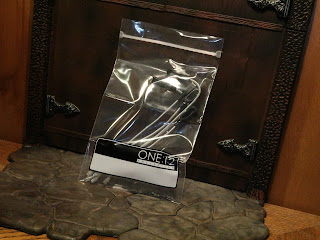 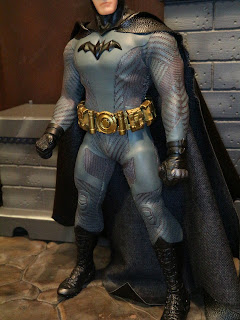 * I know that some people like to rag on the "outdated" look of superheroes wearing trunks but I still think there is something missing here. This Batman really could have benefited from trunks of some sort, don't you think? Otherwise there just seems to be too much grey. 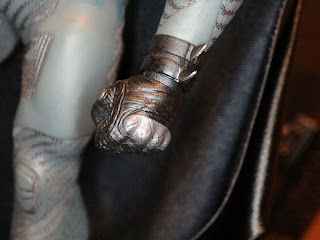 * Just because Mezco is using this as their version of a first appearance Batman and used some imagery from Detective Comics #27 in their marketing, this Batman absolutely should have come with purple gloves. That's such an unusual element of the early costume and just one pair of purple gloves would have been a very welcome addition to the figure. 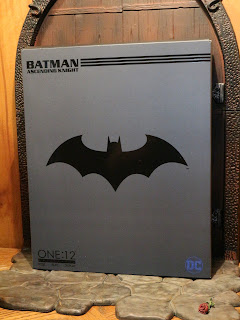 * While the Mezco One:12 Collective figures have typically come with nice heavy 5-panel storage boxes that are easily accessible to put figures and accessories in, the Knightmare Batman comes with a standard box that feels very light and flimsy. I love the look and feel of the standard boxes and I'm frustrated that Mezco seems to be going in this tradition. 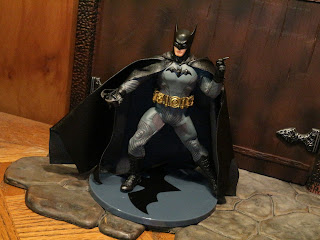 I've been very excited to receive this figure and I'm thrilled to finally have him. While I probably would have made a few different choices stylistically if I were designing the figure, I can't argue with the quality of the figure we received. It's clear that a lot of though goes into each release in this line and Arkham Knight Batman almost tells a story with some of his unique gadgets. It'll be interesting to have all three of the Mezco Batman Trilogy figures together one day. This is an Epic figure and definitely a desirable piece for Batman fans.


If you're looking for more Batman figures, check out my reviews at the Dark Knight Galllery!