Something Has Survived!: Pteranodon from Jurassic World: Legacy Collection by Mattel 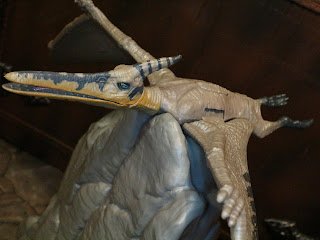 Other than the small Pteranodon that came with the original Kenner Alan Grant figure I've never owned a Jurassic Park branded Pteranodon until now. I recently picked up the Jurassic World: Legacy Collection figure from Target (the Legacy Collection is exclusive to Target) so now I have one in my collection. Do you know where all of my childhood flying dinosaurs came from? Tyco's Dino-Rider line. I had some of those dinosaurs which were quite impressive. So impressive, in fact, that around 1990 or so Tyco partnered with the Smithsonian Institution and released them (without their armor and weapons) as the Smithsonian Institution Dinosaur Collection. Of course, that's probably a collection for another day as, sadly, I don't think I still have any of those still around. I do have this new Jurassic World Pteranodon, though. Let's check it out after the break... 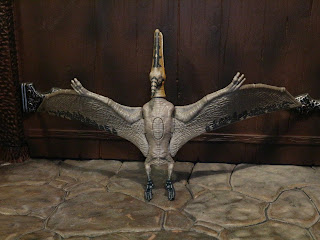 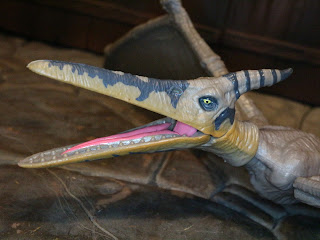 * The headsculpt is great. Maybe it's because of their frightening appearance in the novel Jurassic Park but I've always found Pteranodon's to be quite creepy looking. This one has a great headsculpt with beady eyes and a long beak that opens. The paintwork is excellent and the opening jaw is fun to play with. 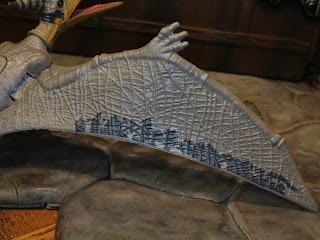 * The wings have a nice detailed texture to them. The paint scheme isn't terribly exciting but the sculpting adds a lot of character. 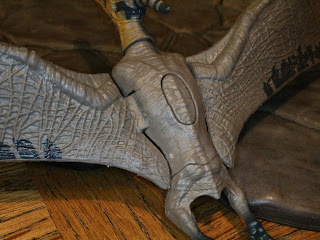 * The Legacy Collection dinosaurs in this scale all have an action feature and the Pteranodon has flapping wings. Push down on the button on the pterosaur's back and the wings flap back and forth. It works pretty well and makes sense for a flying creature. 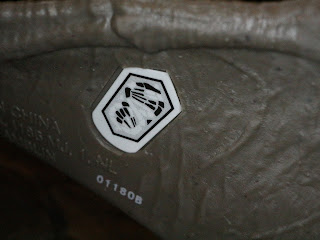 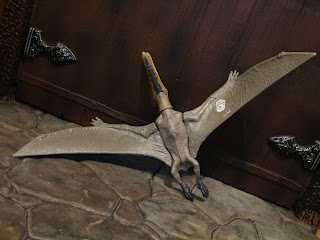 
* While most of Mattel's dinosaurs are not super articulated they at least have a few usable points of articulation besides the head. The Pteranodon really could have benefited from a bit more playability and a few more joints, probably in the legs or even a joint or two in the wings. There really isn't even a good way to pose this figure on a shelf without using a stand or something. 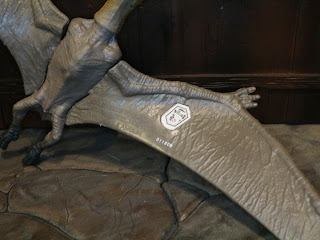 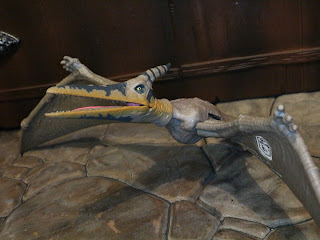 * The head is pretty cool, especially the opening jaw, but the balljointed neck has a very limited range of motion keeping the Pteranodon from being able to look forward. These guys were so scary in Jurassic Park III and I'd love to be able to have a figure that could pose like the ones in that scene. 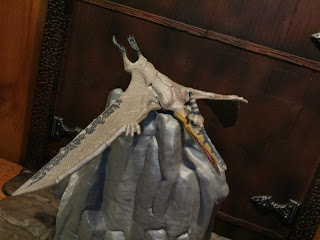 I'm not terribly impressed by the Pteranodon. It has a great headsculpt and some good sculpting on the wings but the figure just feels too limited. Flying figures are always fun to "swoosh" around but considering that this Pteranodon's legs can't reach down to scoop up fish or people nor can it land and look menacing it feels a bit lacking. The Pteranodon is kind of an Eh and a 1/2 figure in the series and probably worth skipping unless you really want a Pteranodon. Otherwise, there are more dinos that will give you more bang for your buck.


This is the first Pteranodon I've reviewed in the Jurassic World: Legacy Collection line. For more figures from the series, check out the following:
Pachycephalosaurus
Robert Muldoon
Velociraptor