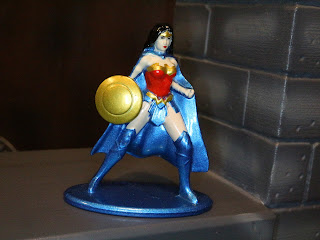 The next few days should have a nice peppering of figures from series 4 of the DC Nano Metalfigs line from Jada Toys. Today I;m checking out figure #53, Wonder Woman. Jada Toys calls this "Rebirth" Wonder Woman, probably due to the presence of the cape. This Wonder Woman is a repaint of Wonder Woman #4 that was released on a single card in series 1, in a 5-pack, and in the first 20-pack. Wonder Woman currently has four figures in the line putting her in second place for character with the most figures in the line (of course, Batman is #1 with between and 11 and 13 figures, depending on whether or not you count Batman Beyond and Thomas Wayne). While we're all still waiting for a Gal Gadot based Wonder Woman, let's check out this version after the break... 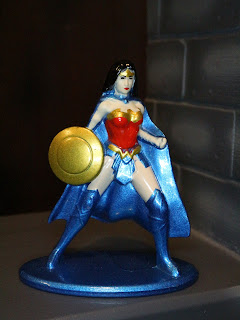 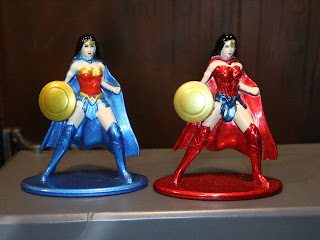 * Here's a quick picture of both Wonder Woman figures next to each other. The paintwork is much cleaner on the newer figure with the color differences being more detail on Diana's armor and blue for the boots and cape. The newer figure definitely looks better. 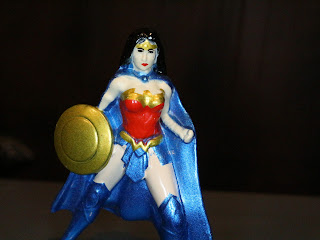 * I'm really impressed with how clean Jada Toys has got their paint operations on such small figures. They seem to improve with each series. I love the colors here and the separate paint applications for the belt and eagle on Diana's breastplate. This figure looks noticeably better than the previous release. 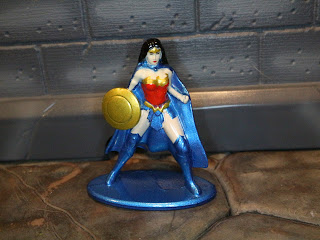 While The DC#38 Wonder Woman is still my favorite Wonder Woman figure in the Nano Metalfigs line, this one is almost as good. She's a repaint, but a repaint that actually improves the figure. She's a Great and a 1/2 minifigure and a nice little extra in the line. Hopefully she'll get a new sculpt sometime soon so we can complete the DCEU Justice League as well.