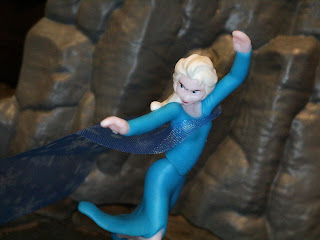 The other day I noticed that Ferrero has put out some Frozen themed Kinder Joy eggs so, naturally, I had to pick one up for my daughter and one for me. We opened ours up last night and while my daughter snagged a Frozen Fever Anna, I nabbed Queen Elsa. Hot diggity dog! We both really dig Frozen and I think I was almost as excited to find these as my little one was when I gave them to her. I like candy and I like minifigures so this is a pretty great deal, right? There are also Jurassic World Kinder Joy so maybe I'll pick those up next. For now, however, I'm checking out Elsa in her iconic "Let is Go" pose. More after the break... 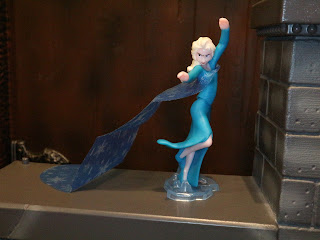 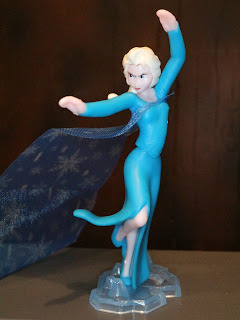 * Elsa is much taller than I thought she would be. Standing at almost 2 1/2 inches she's a pretty large minifigure. You actually assemble her which is kind of cool. Attach her foot to the base, slide the cape onto her torso, and attach the lower body to the upper body. That's all! This is a good pose with pretty nice work on the head considering that it is a pack in toy with candy (which is yummy, by the way). Elsa's dress seems a bit under-detailed but, again, this is the modern equivalent of a Cracker Jack toy, so maybe it is best not to expect too much. 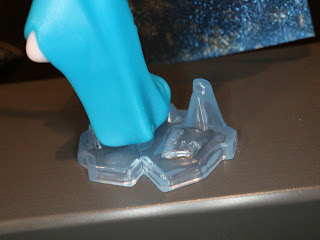 * These figures all have little bases they attach to in order to keep them standing. Elsa's base is fittingly a translucent, frosted piece of ice. 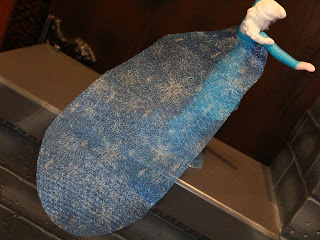 * My daughter's Frozen Fever Anna has an actual fabric skirt while this Elsa comes with a translucent material cape covered with snowflakes and such. It's a bit too long but it does look rather nice. 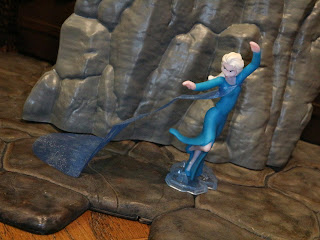 Again, considering this is a minifigure included in a candy set, I'm pretty impressed. The sculpt is decent, the flowing cloth cape definitely adds to the shelf presence, and the pose is straight up magical. If you can pick this up and not belt out  a verse or two of "Let it Go" then you have far more willpower than I do. Elsa is a Great little minifigure and definitely a cool pull from a Kinder Joy egg.

I have reviewed two other Elsa items: The POP! Disney Elsa, Marshmallow, & Olaf from Frozen set and the Figma Elsa.