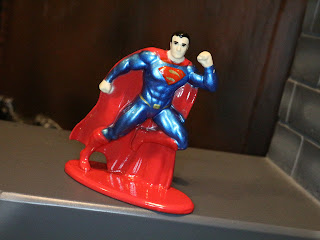 I'm still really just beginning to make my way through series 4 of Jada Toys DC Nano Metalfigs and today I'm checking out figure #52 in the series: Superman from the film Justice League. Series 2 kicked off the Justice League roster with two figures from the Justice League team, Tactical Suit Batman and Flash, and series 4 continued by offering Superman, Cyborg, and Aquaman. Wait! Where is Wonder Woman? We have yet to receive a DCEU Wonder Woman of any kind (although she is the second most produced character in the line)! What gives? Anyway, this review is about Superman. We've received two previous Superman figures, Rebirth and New 52, so this one offers us something a bit different. Let's check out the Justice League Superman after the break... 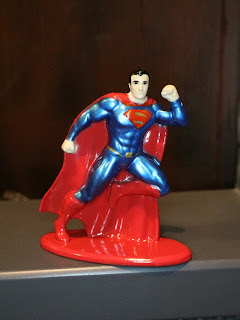 * One of the things that you'll notice right away (besides the bold red and blue metallic paint) is that Superman is posed in an "up, up, and away" styled pose. He looks really cool with one foot barely touching the ground as if he's just about to begin a giant leap into the air. Having a more dynamic pose like this works really well for these smaller figures! 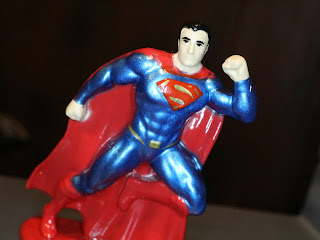 * When you zoom in you can see that the paintwork is quite good. Again, for being such a tiny figure, Jada Toys has done an excellent job of giving these little figures some very neat and clean paintwork. Clark's belt and chest symbol are incredibly well defined. Heck, even the face isn't bad for being super tiny. 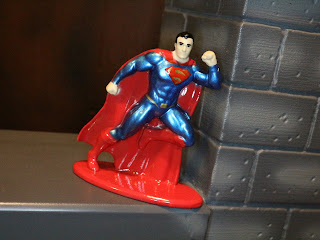 The Justice League Metalfigs have been quite nice and Superman might even be the best of the three Superman minis released so far. He's a Great figure that really captures the look and feel of the character while delivering some quality paintwork. For around $1 I'm not sure you are likely to find a better deal in toy aisles this year than picking up these little die-cast metal DC Superheroes. They're one of my favorite toylines of last year and this year and I hope Jada keeps cranking these out for as long as possible. This is a Great mini Superman!