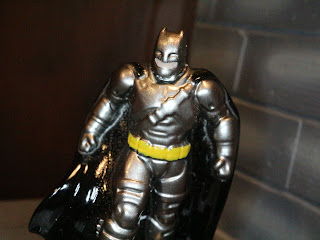 It has been a few days since I last served up a review, hasn't it? Well have no fear, friends! It's about to get crazy! I just received the Batman Day 2017 variant Ascending Knight Batman in the mail, I have some more Solo: A Star Wars Story action figures to review, and I just received a complete set of series 4 of my beloved Jada Toys DC Nano Metalfigs fig. Series four includes twelve figures total with nine new sculpts and three repaints. Armored Batman is one of the brand new sculpts. Each figure in this line is numbered and while the other figures in this series are numbered 51-61, Armored Batman is numbered #25. Why's that? Probably because this sculpt has been floating around for a year or more and has been shown off a few times but only now has Jada Toys inserted him into the line. He's actually the only Batman (unless you count Batman Beyond) in the series, which is pretty interesting considering that about 1/4th of the line consists of Batman variants (Seriously; I count about 13 Batman variants and around 60 figures thus far). Armored Batman is based on the BvS Armored Batman costume and completes the BvS trio along with regular Batman and Knightmare Batman. Let's check out this armored version of the Caped Crusader after the break... 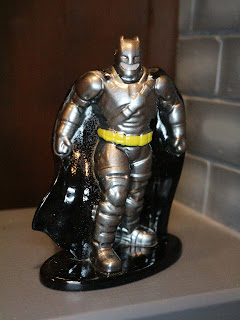 * The die-cast metal nature of the figure is perfectly suited for Armored Batman, isn't it? The figure actually looks pretty decent although it suffers from the sculpting problem that a few of these figures have with the cape kind of blending in with the rest of the sculpt. The paintwork nicely differentiates things but still everything feels a bit "cramped." I really wish he were carrying the spear. 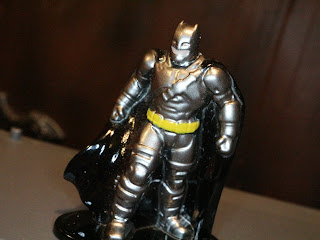 * If you look closely you can definitely see some pretty solid detail work here, though, such as the strap across Batman's chest and the detail on the various pieces that make up the armored suit. He's a very sturdy, fairly heavy little minifigure. 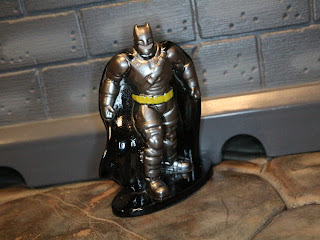 Jada Toys has improved on their paintwork and sculpting over the past year since they began releasing these figures and while Armored Batman has elements of some of their initial offerings in the Nano Metalfigs line, he also shows the cleaner paintwork of newer releases. He's not one of the best but he's still a Good and a 1/2 figure, especially considering you can snag him for around a $1. I actually received these from a store called Ferrara Market and received them super quickly and very nicely packaged. The store owner is a member of many of the Nano Metalfigs Facebook and I've heard nothing but good things from anyone dealing with them. Since these can be tough to track down (I don't know of another online retailer who sells these) Ferrara Market is probably your best bet!

If you're looking for more Batman action figure reviews then check out the Dark Knight Gallery!