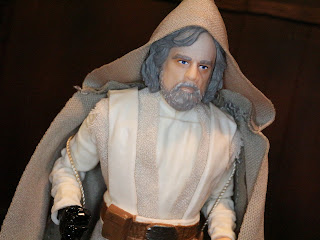 Well..it's been over a week since I saw The Last Jedi and since you're someone intentionally tracking down Star Wars action figure reviews on a website, I'm assuming you've already seen it too. If for some strange reason you haven't, I'll try to keep spoilers to a minimum. I mainly want to focus on the action figure anyway which is of Luke Skywalker in his Jedi Master robes. Luke was already released in this outfit back on Force Friday (as well as being part of a SDCC 2017 exclusive set with Rey) so there's nothing incredibly unique about this release. Like the deluxe version of Rey, this exclusive figure (it's a Target exclusive, by the way) includes a die-cast metal part, an environmental display base, more soft goods mixed in with the figure's sculpt, and an improved paint job. That also comes at an elevated price, though. I now have all four of the deluxe figures in hand (I've reviewed Rey and Snoke already and Kylo Ren's review will be coming soon) and I can safely say that Snoke and Luke are the two deluxe releases that you could purchase and feel like you were missing nothing from the single packed figures. Luke absolutely does feature some nice improvements that make him a better figure than the standard version though. Pull yourself up a bottle of green milk and let's check out this new version of Luke Skywalker after the break... 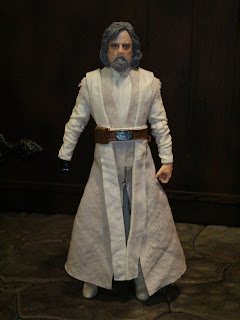 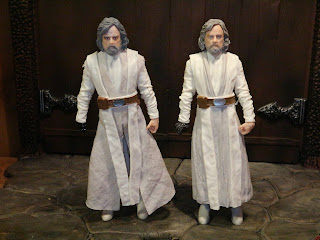 * On the left is the Target exclusive version of Luke while the standard version is on the right. In a smaller image it is nearly impossible to notice the differences. View the full picture, though, and you'll clearly see the improved paintwork and new torso. The standard release features sculpted plastic robes while the deluxe release features soft goods woven in with the sculpted robes. 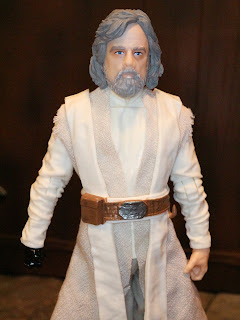 * This is a pretty good looking figure. Luke's outfit is fairly simple with a mixture of off-white and grayish-tan robes and a simple brown belt, but it's cool. There's something almost jarring with seeing Luke wearing an outfit that seems so much more at home in the Prequels. This isn't my favorite outfit of Luke's from The Last Jedi, though, so hopefully we'll see his other two before the release of Episode IX. 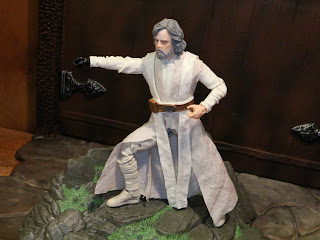 * Unlike the standard release, the plastic robes do not inhibit the leg motion. Luke can take on a wide variety of poses and feels sturdy and well made. This definitely isn't much of an "action" outfit for him in the movie but he wears it in quite a few crucial scenes. 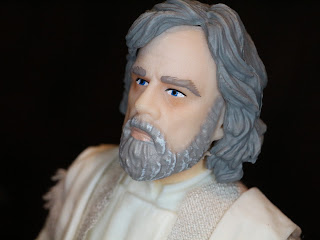 * This figure has much better paintwork than the previous release and it radically improves the likeness. This is an excellent rendition of Luke. The hair color still doesn't seem quite right but it's close. 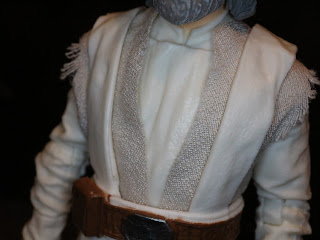 * The way that Luke's tunic is a mixture of sculpted plastic strips and actual fabric looks great. It's a very convincing look and definitely makes this figure feel much more complex than the standard release. 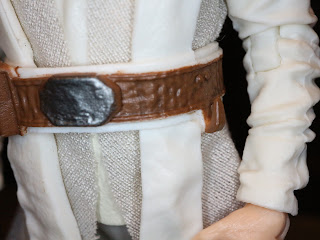 * Luke's belt is much better than on the standard release. The lightsaber clip (not that he needs it) is much improved, too. This clip would actually hold a lightsaber. 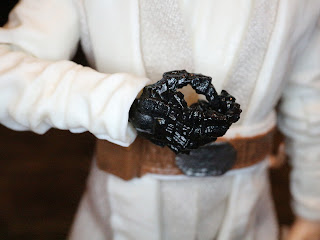 * I love Luke's mechanical right hand. The sculpt is very cool and features a lot of nice detail. 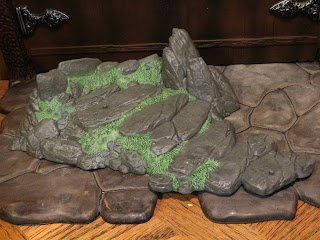 * The selling piece of this set is the Ahch-To Island display base. This is a nice large piece featuring some solid sculpting and paintwork and two pegs for holding figures. You can easily put Luke and Rey on here to recreate their famous scene from the end of The Force Awakens (and their infamous scene from The Last Jedi). 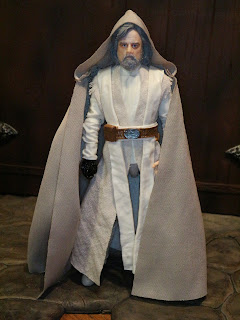 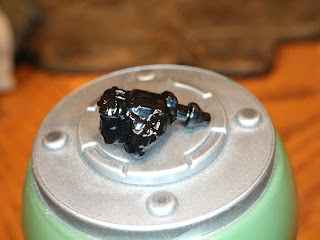 * Luke comes with a die-cast metal robotic hand that can swap out with the plastic right hand. It's a cool idea but the metal hand seems too small, is sculpted in an odd fist, and doesn't really add anything different from the standard hand. It seems kind of useless, really, especially being that it's billed as a deluxe feature. Any accessory, particularly a Porg, would have been better. 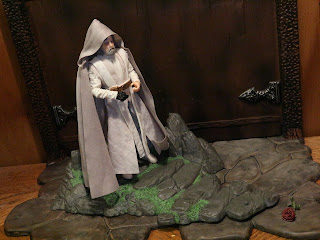 If you're looking for more figures from the Black Series, check out the following: