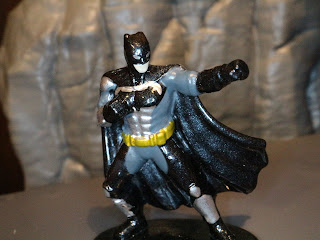 Like in all things, Batman has definitely come out on top in the DC Nano Metalfigs line. With nine different versions of the Caped Crusader (including one that's actually Thomas Wayne!) Batman minifigures make up about one fourth of the line! Still, who am I to complain about more Batman? Well, I do hope that Jada Toys continues to diversify the line and release more characters and less variants but I'll take what I can get. Today I'm looking at the Tactical Suit Batman based on the suit Batman wears at the end of Justice League. Hey, that's another thing: What the heck is wrong with you people? Go see Justice League! It's incredible fun and is a dream come true for this DC fan! I know it has some weak parts but it's well worth watching. Anyways, let's check out this figure after the break... 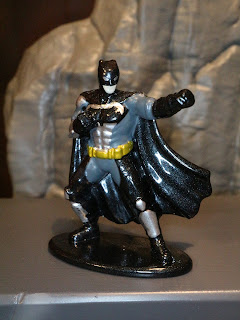 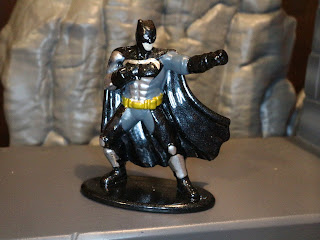 * I like the pose. It's fairly dynamic and looks great on the shelf, particularly when posed next to a villain of some sort. The outfit is also fairly complex and looks great to the naked eye (some of the effects fall apart when looking at the figure through the enlarged images but in person it's very, very cool). 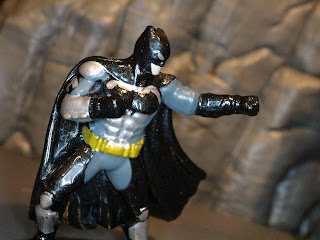 * There are some scuff marks and paint flaws on the figure, though. Again, not super noticeable in person but still present. The metallic effect looks awesome on this suit, though. I do wish the Night Owl like goggles of the tactical suit were better captured here, though. It seems Jada Toys opted just to give Batman silver eyes. 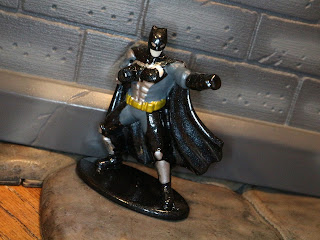 Tactical Suit Batman is another Great minifigure in this line. It's tough to be too hard on anything that costs less than a dollar but this guy is definitely absolutely worth the price of admission. He's a cool piece for your collection. At this point I'm only missing the classic colors Wonder Woman, Suicide Squad Katana, and Brainiac from the 20 pack (I'm really not wanting to repurchase the other 19 figures over again) and then I'll have all of the DC Metalfigs. Let's hope Jada Toys shows off some more at Toy Fair this year because this line is quite refreshing and addictive for some reason!

I've reviewed so much Batman stuff that the man has his own review archive! Check out the Dark Knight Gallery for more of the Caped Crusader.