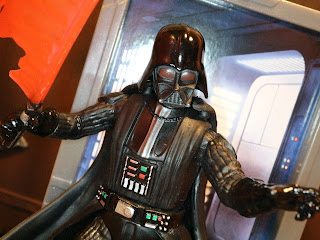 While the 1/18th scale Titanium Series Black Series figures have been out for months due to being one of the product ranges specifically released for the 40th Anniversary of Star Wars, I just received Darth Vader this past week. He was a Christmas gift from a friend so, for that reason alone, I am ver appreciative of him. While I haven't really seen these pegwarming too much I think it is safe to say that they weren't received as well as Hasbro might have hoped. They're one of those products that I'm hard pressed to determine who the Target audience and where they'd fit into a collection. Obviously, they're smaller so they're not marketed towards collectors of the 6 inch Black Series. They're also a hair too large so it's tough to say that 1/18th scale collectors would be interested in these either. Vader is more like a statue, but he has some articulation and doesn't particularly stand up terribly well on his base. It's an odd product range that doesn't seem to complement any existing product range nor does it seem to really cater to a new audience. Let's check out die-cast Darth in a bit more detail after the break... 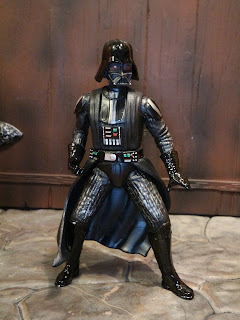 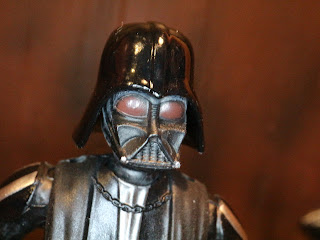 * The helmet turned out great. There are some rather impressive elements of this figure and the way Hasbro handled the helmet is one of them. The colors on the helmet and mask and the red lenses look excellent, making this a very authentic Vader sculpt. You can practically hear James Earl Jones' voice emanating from this little guy. 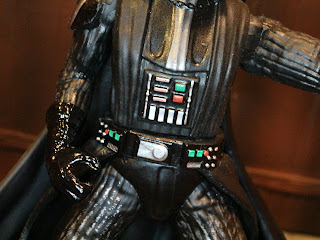 * The chest panel and belt panels also look great as does the mixture of various paint shades Hasbro used give the outfit a realistic appearance. The paintwork overall is pretty excellent with sharp, clean lines. The work on the various buttons is especially good. 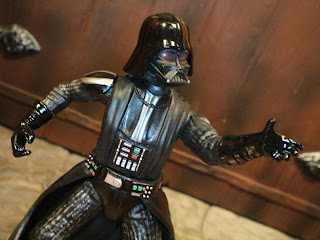 * While Vader is immobile below the waist down I do have to give him props for having swivel/hinge shoulders and a balljointed neck. They work great and do allow for some nice expressive motion. If Hasbro would give all of their five point of articulation figures swivel/hinge shoulders, swivel wrists, and a ball jointed head or neck I think collectors would be much happier with that line. 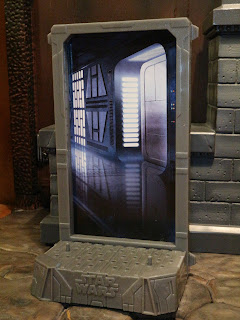 * The other half of this set is a display base that Vader stands on. It is made up of two separate pieces: The base and the backdrop frame. They're molded in plastic while the backdrop is a thick piece of cardboard. The first side of the backdrop shows off a Death Star corridor. 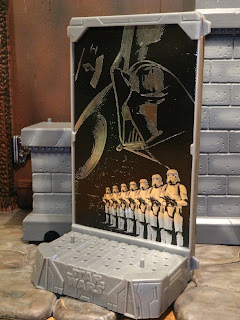 * Rather than flip the cardboard backdrop the whole frame can remove from the base and be flipped around. That's a nice feature as you won't accidentally damage the cardboard backdrop. The second side is a black and silver foil stamped image of Vader, some Stormtroopers, and the Death Star. 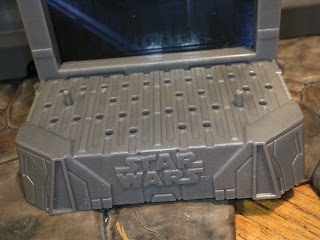 * Here's the base. As you can see there 32 peg holes where you can stick the 4 included pegs. This gives you some variety in displaying figures although for the largely preposed die-cast metal Vader, only one or two positions will work. 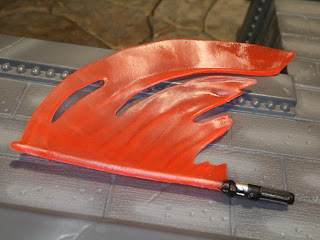 * Vader comes with this kind of cool lightsaber that features a motion flare effect molded onto the blade. It makes the blade look as if it's actually swinging through the air. Not that lightsabers really look like that in the movie or anything but it's a cool extra and it reminds me of the Attack of the Clones toyline that features these little extras. 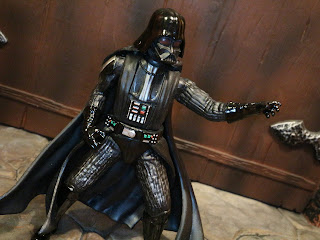 * Their are definitely some odd proportions on this figure, particularly on the chest and legs. They look a bit too thick and have an odd shape to them.

*Why does Vader have a rubbery cape? Hasbro has been giving Black Series figures, whether 6 inches or 1/18th scale, cloth capes for years now. The rubber cape feels like something from the POTF2 era but not in a good way. 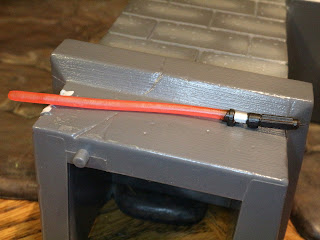 * Vader's standard lightsaber is all bent and wonky looking. It's kind of rubbery and the hilt is very under detailed. 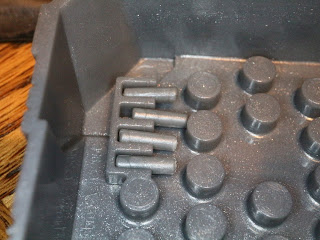 * To keep all of the pegs in place Hasbro included this handy-dandy peg holder in the bottom of the display base. Unfortunately, I could never get any of the pegs to stay. Turn the base over to set it up and all of the pegs go rolling off. 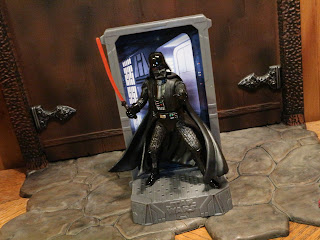 Looking at this product for what it is, it's not bad. It's a solid statuesque figure of Darth Vader with a nice display stand and a cool lightsaber with a swinging effect. It's flaws, but still a Good figure. Looking at this as a collector, though, I'm kind of perplexed as to why Hasbro thought this was a product to bring to market. It complements none of their other ongoing scales nor does it seem to fill a requested niche. Had Hasbro tried to do updated "Kennerized" versions of Star Wars figures or something in a smaller scale to appeal to minifigure collectors I can see the value as those scales have fans. What is Vader supposed to complement?