Toy Review: The Bat (3/5) from Hot Wheels by Mattel 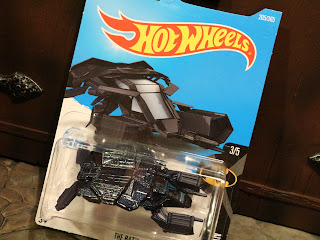 I'm definitely not a Hot Wheels collector but whenever I see one of the standard $1 or less Batman vehicles I have to pick it up. It seems that Hot Wheels has a small subset of five Batman vehicles in their standard roster of cars currently available and the first one I located was the Bat. Originally released in 2012 and hailing from The Dark Knight Rises, the Bat has seen release quite a few times (I have pictures of two previous releases in the body of the review). Let's check out this latest version of the Bat after the break... 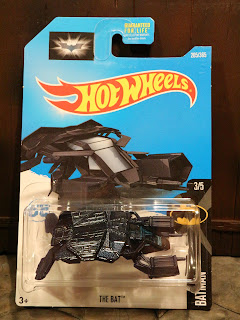 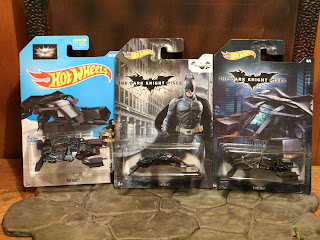 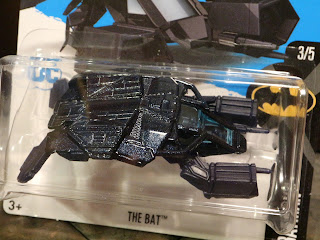 * Here's the Bat itself. As you can see it's the exact same model we've seen since 2012. This one looks to have a more shimmery blue paint job than previous models. Still cool although I prefer the darker black versions better. Still nice to get a bit of a change though, too. I love the translucent windshield and how you can see the two seats inside. 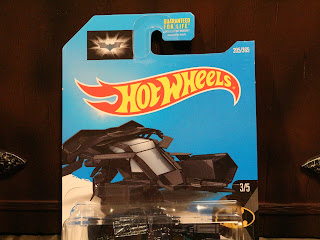 * The packaging on this version of the Bat is definitely nowhere as exciting as previous releases. It's just a traditional Hot Wheels package with an artists rendering of the Bat and the logo for The Dark Knight Rises on the top left. 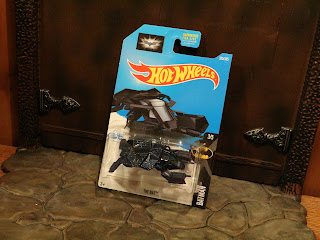 These Hot Wheels cars are pretty much the only thing I collect that I don't take out of the package. I really like the look of them carded and I really don't know quite how I'd display them. This is a Good and a 1/2 version of the Bat, especially for $1 or less. The packaging is plain so it's not as cool for display, but it's tough to argue with the price or the coolness of the Bat itself.


If you're looking for more versions of the Bat I've also checked out the 2015 version of the Bat from the Batman subset.

If you're looking for more Batman Hot Wheels, check out the following: