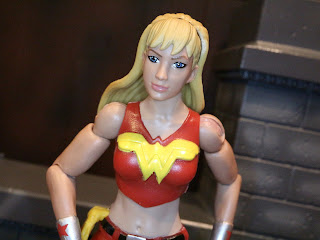 Another smaller series of Mattel's DC Comics Multiverse figures have made their way out just before the end of the year. The series is supposed to include Wonder Girl, a Frank Miller styled Wonder Woman, and the Super Friends versions of Superman and Aquaman. At this point I haven't found the Super Friends figure from the series but I did find both Wonder Girl and Wonder Woman on Amazon. I believe that Wonder Girl and Wonder Woman were supposed to be a Wal-Mart exclusive mini series released earlier this year to tie in with the release of the Wonder Woman film but it seems that never materialized. At least they made it out, huh? Both Wonder Girl and Wonder Woman include pieces of a small Collect and Connect figure of Dr. Psycho whom I'll review soon as well. Today I'm looking at the Cassie Sandsmark version of Wonder Girl. Cassie is the third person to bear the Wonder Girl name and we get her here in her outfit from the Teen Titans run of the early/ mid 2000s. Since she was never released in the Young Justice series, I'm sure there will be plenty of folks wanting her to complete that roster (even though she's not wearing that outfit). More after the break... 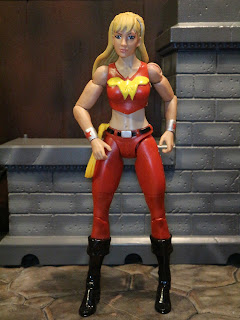 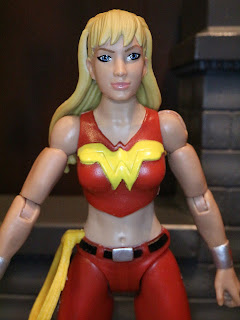 * Wonder Girl has a pretty nice appearance with quite a few new bits of tooling. While she is as tall as a standard figure (and not sized to go along with some of the older DC Universe Classics Teen Titans figures) she looks good mixed in with most figures from the various Mattel lines. She has a somewhat stylized appearance that should go along with the Young Justice line, but it isn't too stylized that she won't stand out with your other DCUC or DC Multiverse figures. 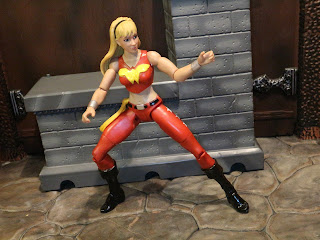 * Cassie is definitely built with a mostly older style of design that's closer to DCUC, although there are some odd differences. She's not incredibly well articulated but she still can take some fun poses and is a decent figure to play around with do to her sturdiness. 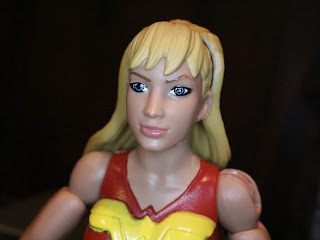 *  I really like the portrait. The eyes are very clean and expressive and the headsculpt, especially the hair, is rather lovely. Again, there is a but of a stylized look here but I think it works. 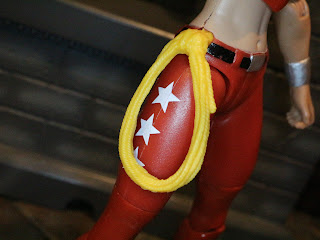 * It's not very detailed but Wonder Girl is sporting a lasso on her belt. She also has some white stars on her hips that are very clean tampographic stamps. 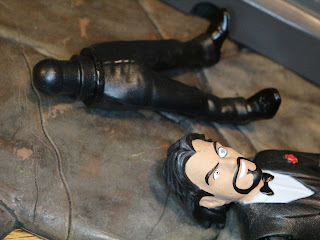 * Wonder Girl includes two pieces for the smaller Dr. Psycho Collect and Connect figure. You'll only need to purchase her and the Frank Miller inspired Wonder Woman to build Dr. Psycho, so that makes for a fairly easy figure to build. Cassie comes with Dr. Psycho's head and his legs and waist, which are all one piece. 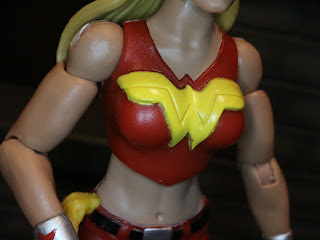 * While I like the bold primary colors of the raised "W" on her chest, the paint work is pretty messy around the edges. Considering that there is not a lot of paintwork on the figure overall this stands out a bit. 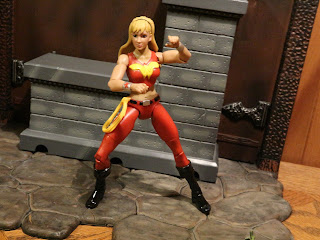 Wonder Girl is a slightly above average DC Comics Multiverse figure. Of course, she's a new character in Mattel's long line of DC Comics efforts so that's a plus. She's a great looking figure that should nicely fill a spot in most DC collections although it would be nice if she had another accessory or two. She's a Good and a 1/2 figure.