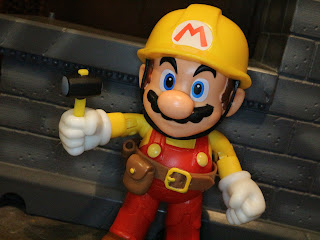 Merry Christmas! My guess is that quite a few of you out there got a Nintendo Switch today or that you have fond memories of getting an NES, SNES, Nintendo 64, GameCube, or a Wii for Christmas in the past, so I decided to review a Mario figure on this special morning! While you're celebrating this special day, thanks for taking some time out of your schedule to visit your old pal Barbecue as he talks about toys. It's been quite a few months since I last reviewed any of Jakks Pacific's World of Nintendo figures and those reviews were of figures technically released in 2016. Wave 2-5 and 2-6 have both been released in 2017 but I never saw them anywhere for retail price and there weren't any figures I absolutely had to track down so I skipped most of them (I already own the Lakitu from S.H. Figuarts so I didn't put much effort into tracking down Jakks' version). I really wanted this version of Mario Maker from the very fun Super Mario Maker game. It's a great, colorful variant that looks great on the shelf and represents another modern take on Mario. Let's take a closer look at Mario after the break... 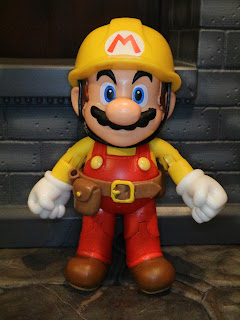 Accessories: Hammer and a tool belt. 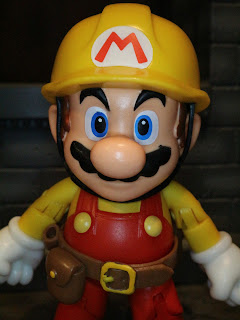 * It's a Mario!!! I love the look of this figure. The bold yellow and red just have a very classic Nintendo look to them and the colors just go together so very well. While most everything below the neck is reused from the previous standard Mario figures, the right hand and head are all new. The accessories are, too. This is just an impressive looking figure and shows off how well Jakks Pacific captures the look of the Nintendo crew. You don't know how bad I want them to make Rosalina, Pauline, Princess Daisy, Birdo, Wart, and Mouser. 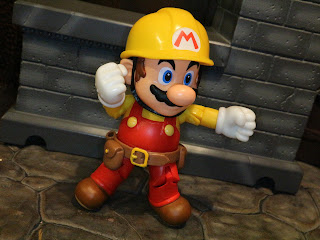 * Jakks' offerings are definitely geared for mass market retail and have less articulation than the import versions of Mario. Considering that, I still really do like how sturdy these figures are. They're definitely made for play and they have a nice amount of joints for achieving some fairly basic poses. 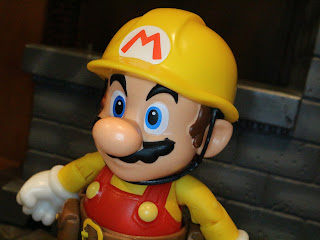 * Mario's headsculpt is impressive. Jakks has always done a nice job of capturing Mario's likeness but this one is unique because Mario is wearing his Mario Maker hardhat. The hardhat is part of the sculpt and isn't removable but the straps are separate pieces. They're permanently attached but being separate pieces that sit over his chin "realistically" just makes them cooler. 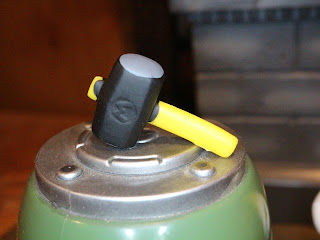 * Mario includes a hammer. It's a very distinctive Nintendo-like design that even features a little "M" stamped onto the side. Mario holds this perfectly in his right hand. There's a little slot that it can slide right into. 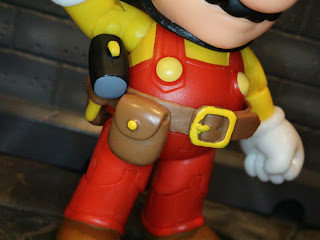 * Mario's tool belt is another new piece. I technically think it's removable but you'd have to be very careful when pulling it over his legs.  didn't want to bend mine out of shape so I left it on. The paintwork is simple but it matches the character design and looks great. There's even a look on the right side to hold Mario's hammer! 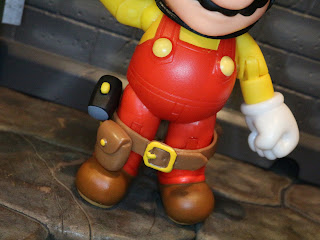 * My one negative with this figure is that since the belt just kind of floats over Mario's waist it tends to slip down. If you really hike it up to near his chest you'll be fine but if you're playing around with him the belt will inevitably slip. 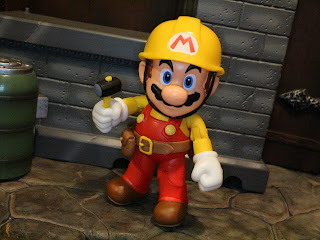 I really like this version of Mario. This is the first and only 2017 World of Nintendo release I've picked up this year, which is kind of a bummer, but there haven't been too many figures that have appealed to me nor have they been very easy to find. I found a decent price on this Mario Maker version of Mario, though, and I'm quite pleased with him. I wish his belt worked a bit better but just standing around he looks perfect. He's a Good and a 1/2 figure and well worth tracking down if you're interested in more distinct Mario variants.


I've now reviewed quite a few Mario figures (something I never thought I'd be able to say) including the standard Mario, the 2-4 Mario, the classic Fire Mario, the indestructible Gold Mario, the water-hating Cat Mario, and the magical Tanooki Mario. I've reviewed plenty of other heroes and villains in this line, including: