Road to the Last Jedi: Poe Dameron with X-Wing #227 from POP! Star Wars by Funko 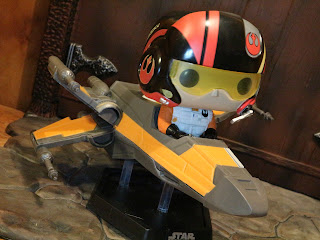 Today I'm checking out the the second toy item from the latest Smuggler's Bounty crate and it's a deluxe POP! vinyl: It's Poe Dameron with X-Wing #227! This is a huge win in my opinion because I really like Poe Dameron (if you're not reading the Marvel Comics series Poe Dameron you really need to!), I like X-Wing fighters, and I like POP! vinyls. Funko has been offering a nice mixture of POP! vinyls in these boxes and while I kind of wish we had received something a bit more specific to Episode VIII, this is still a cool figure/ vehicle combination. Let's check Poe out after the break! 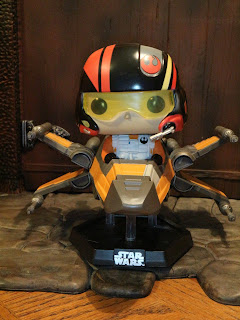 Non-Scalper Price: Included in the November 2017 Smuggler's Bounty crate along with a bandanna, socks, a Rey keychain, and a Luke Skywalker Mystery Mini for $25 dollars. 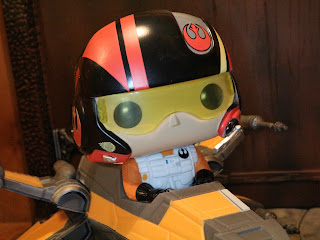 * Poe Dameron looks great with his cool red and black flight helmet (emblazoned with the Rebel/ Resistance phoenix logo) and a translucent yellow visor. You only see the top half of the character as he is "sitting" in the cockpit of his custom X-Wing but what's visible is A-OK. 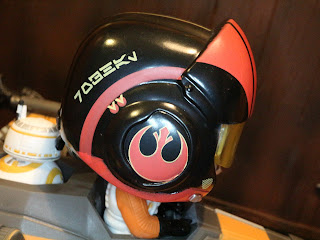 * The side of the helmet is really colorful and features some excellent paint applications. There's another Rebel/ Resistance phoenix on the side and the word "Roehal" written in aurebesh. I still haven't found any explanation for what "Roehal" means so maybe this mystery will be uncovered in the film. Or, more likely, it will be covered in a visual dictionary entry at some point. "Poe" is written on the back in aurebesh as well. 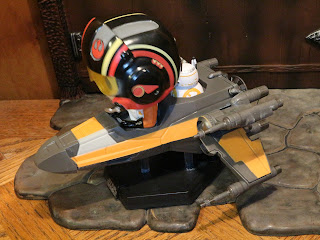 * The X-Wing is really nicely sized. It's definitely not to scale or anything but it definitely has a nice bit of heft to it and seems to be quite accurate for such a stylized piece. The grayish-black and orange paint scheme looks great here and the s-foils are locked in attack formation. 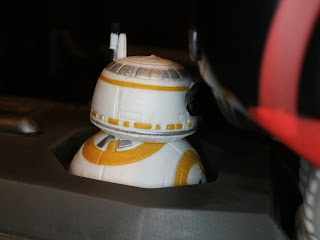 * Guess who else is included here? BB-8! I kind of wish BB-8 were mentioned on the box because he's definitely one of the breakout characters from The Force Awakens and it's well worth nothing his appearance. He's not removable but this BB-8 would definitely be more in scale with the other POP! vinyl figures rather than the mass released BB-8 POP! vinyls that are as large as the standard characters. 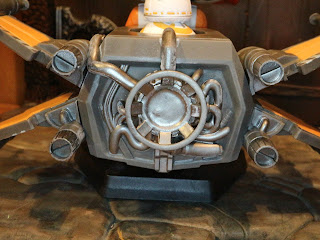 * The back of the engine looks incredible! The detailing is really impressive and the paintwork definitely seems more weathered and impressive than I would expect from a POP! ride. 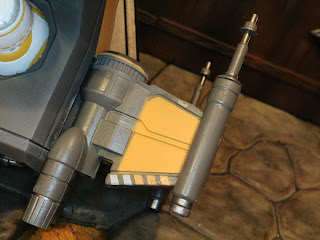 *The wings on the X-Wing look great and the blasters have a very nice shape to them.The paint work on the back of the wings looks great, too. 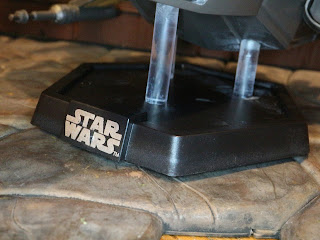 * The standardized base used to hold the X-Wing fighter up is definitely cool but the translucent struts have a weird appearance to them, almost as if they're unfinished in some way. There's also some weird powder or residue left on the base. 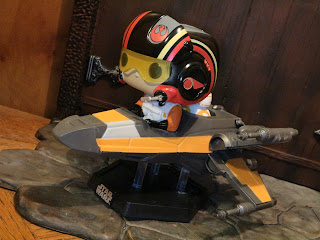 Poe with his X-Wing is another Great and a 1/2 entry in this series. I love what Funko is doing with the Star Wars license and it seems that plenty of other Star Wars fans are loving it, too. They really release a nice variety of product and put a lot of attention into what they release. Considering that you're getting five items, including this large POP! ship for $25 bucks, that's a great deal for Star Wars fans.

For BB-8, I've also reviewed the Black Series Rey and BB-8 2-pack from The Force Awakens.

For X-Wings, I've reviewed the a bunch of Micro Machines sets that included various X-wings, including the Assault on Scarif set, the Desert Invasion set, the Fight the Imperial Might set, and the First Order Star Destroyer Playset.

For more POP! Star Wars reviews, check out the following: