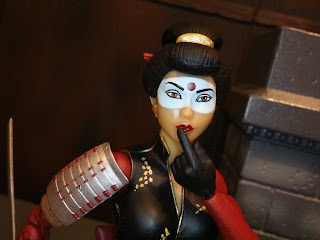 Is this the last of the Bombshells action figures that I'll ever review? We'll see. I would love for DC Collectibles to continue this line but, given their track record over the past year or so I'm not hopeful. Still, let's be grateful for what we have at the moment and check out this very cool Katana figure from series 2. While she doesn't have the same number of accessories or points of articulation as any of the series 1 figures, she's still a pretty cool figure and possibly the highlight of the second series. Let's take a closer look at Katana after the break... 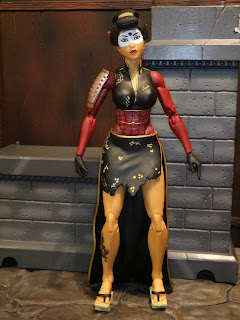 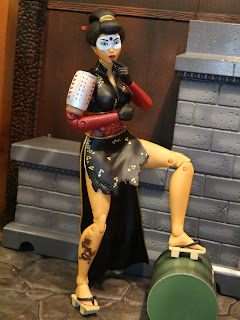 
* First of all Katana, like the rest of the figures in this series, has excellent articulation. Not only do her joints have a great range of motion but they're also plentiful. While there are a couple of missing joints which the first series had, I didn't notice a terribly decreased range of motion. These figures are a joy to pose and photograph. 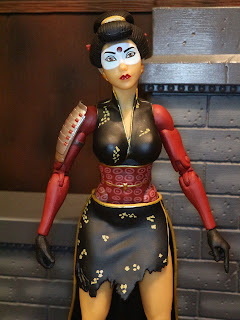 * Katana is one of the most stunning action figures in a line that's filled with stunners. Her costume is made up of a number of unique and varied pieces and DC Collectibles really gets to show off some of the most incredible detail and the neatest paintwork that they're capable. She's just a beautiful action figure. 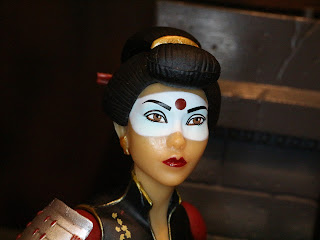 * Katana's headsculpt is lovely, too. She has a very neutral expressive but that's fitting for both the character and in keeping with the tone of the statue. The paintwork on the face is incredible. 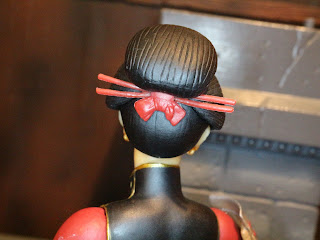 * I'm also digging the design of her hair. The fact that she has a cool hair style and some detailed hair accessories adds to the overall impressiveness here. 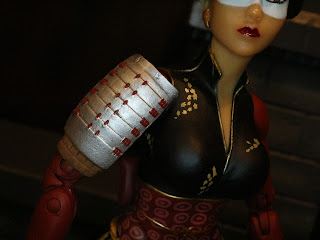 * Katana has a large armored plate on her shoulder that has some excellent detail. 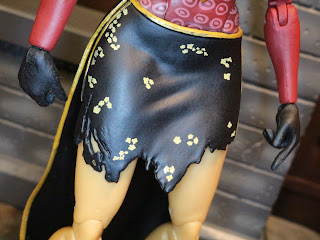 * She's also wearing a kimono that has been ripped in the front. I like the sculpt that makes the front of the dress actually appear to be ripped and torn a bit. It's a great look. 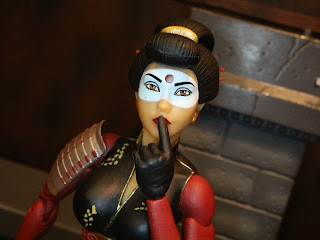 * Katana's left hand is molded in a "shushing" gesture to mimic the look of the statue. Again, it's a great touch and really makes the figure seem a bit more special than a lot of the other figures out there at the moment. 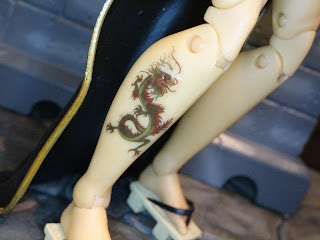 * This dragon tattoo is a lovely tampographic stamp. The paint is incredibly neat and clean! 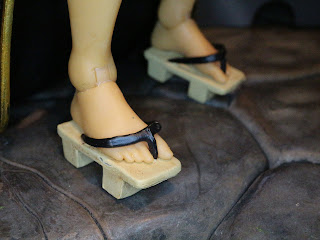 * I love how DC Collectibles actually made Katana's feet and her geta separate pieces. While they are permanently attached, you can tell they are separate pieces which gives them a very realistic appearance. 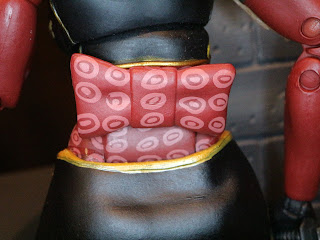 * Last, but not least, here's a close up of the very cool print that's on the sash wrapped around Katana's midsection. Such nice paintwork here! 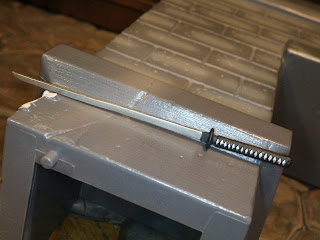 * Katana comes with a simple katana blade. It not only seems like it may be a tad too small but it is also lacking the cool little Oni demon head that's hanging off of the end of the hilt on the statue. That's a cool little detail that I wish DC Collectibles had kept. It's also a nod to the Creeper. 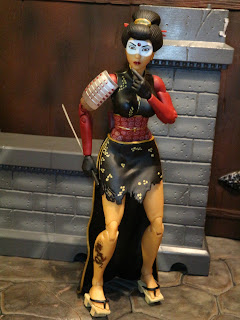 Katana might be lacking the sheer number of accessories of her series 1 counterparts but that really doesn't make her a lesser action figure. Visually she is incredible. The paintwork, the multiple textures and prints, and the beautiful sculpt absolutely makes her the standout figure of series 2. This is one of the best looking figures DC Collectibles has released and she's well worth picking. She is definitely an Epic rendition of the character that deserves a home in your collection.

If you're looking for more DC Comics Designer Series figures, check out the following: