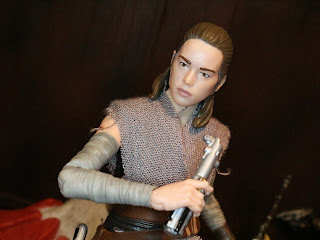 Just a few weeks ago I received in the mail the latest Toys R Us Star Wars exclusive action figure from the Black Series: Rey in her Jedi Training outfit on the planet Crait. While Rey is quite similar to the previously released figure that appeared in both the SDCC 2017 exclusive two-pack and as a single packaged release, there are actually quite a few differences here that should make this figure appealing to you if you're a die-hard Black Series fan including a pretty awesome display base and some die-cast weapons. The figure is actually different as well, featuring improved paint and actual soft goods. Hasbro has released some of these "deluxe" variations of the popular characters for both Episode VII and Rogue One so they're just continuing the tradition here. Let's check out this new version of Rey after the break... 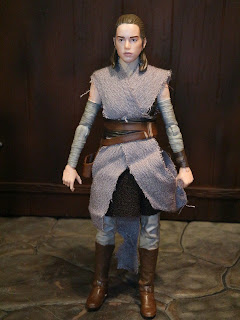 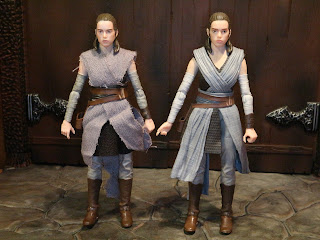 * Here's a look at the TRU exclusive Rey (left) and the standard single packed Rey (right). As you can the paint is improved on this newer figure on the arms and head and the tunic is completely different, featuring soft goods. While they look very similar these are two fairly different figures. 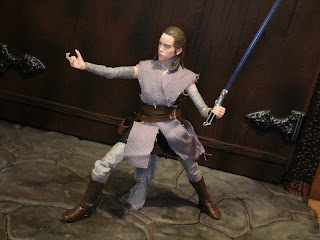 * Rey's articulation is really good. The Black Series figures are essentially built like the female Marvel Legends figures meaning that they can move pretty well. Not as well as a Marvel Legends figure, but close. Rey is a durable, well articulated action figure that is really fun to play with and the new soft goods make her even better. Having three different accessories to utilize also helps to inspire your imagination in giving her some cool poses. 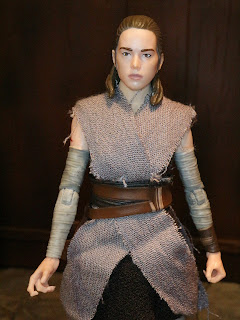 * I like this costume. It has some similarities to Rey's standard TFA costume with the crossed fabric strips held together by a belt and the arm wraps, but the black tunic underneath is quite different. The colors are too. I like the bluish-gray fabric. Is this just what Rey has laying around extra or is this something that pays homage to Luke's Jedi order? While the appearance of the soft goods isn't as crisp as the sculpting on the standard figure, the soft goods do add a life-like appearance all of their own. How you feel about soft goods probably will heavily factor in to your own feelings about this figure. 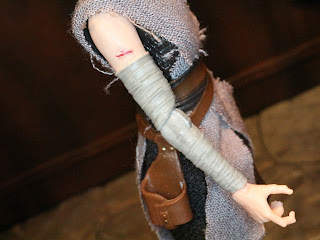 * Not only is the paintwork on Rey's arm wraps improved (they actually have some weathering on them) but she has a prominent gash in her right bicep. The paint work does a good job of making this look realistic in this scale. 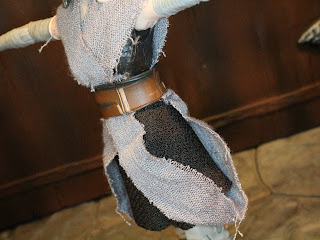 * Rather than just having the cloth wrap, the bottom of Rey's black tunic is also made from fabric. It has a different texture to it that differentiates it from the outer robe. The layered look here is pulled off very well and doesn't look oversized at all. 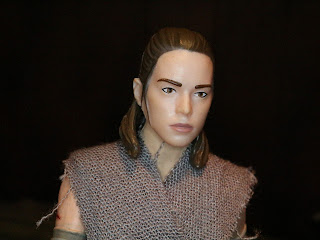 * I really don't think is a different headsculpt than the standard figure but the paintwork really improves this one. This actually looks like Daisy Risley! Great job here, Hasbro. 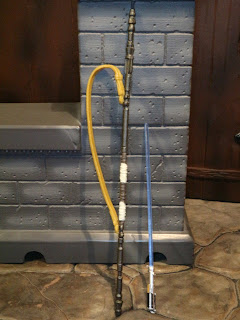 * Rey includes two of the same accessories that the standard figure includes: Hr staff (the strap is a bit lighter in color) and the Skywalker family lightsaber. The lightsaber does separate into two pieces just like every saber before. 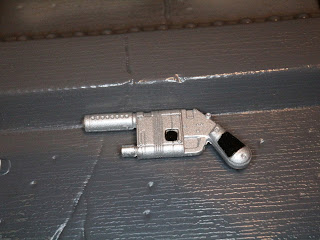 * One of the selling points of this figure is the inclusion of the NN-14 blaster pistol that Han Solo gave to Rey on Takodana. This time it's made from die-cast metal, though. Die-cast metal accessories weren't something I was eagerly awaiting or anything but it is a cool feature. It's a slightly different mold from the pistol included with the standard figure, too. 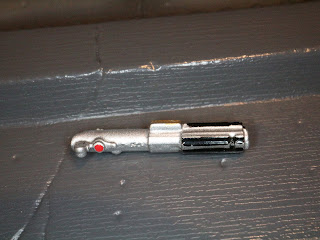 * The second new accessory is a die-cast metal lightsaber hilt. Again, not exactly something everyone was clamoring for but it is a cool extra and a very nicely painted piece. 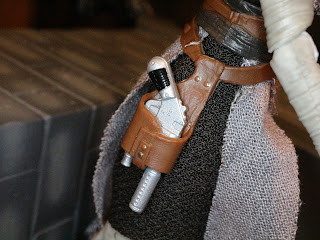 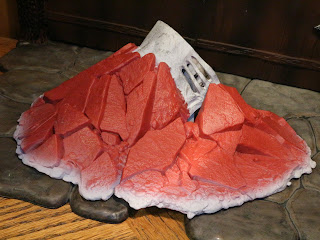 * Crait is a new planet that will appear in Episode VIII. It was mentioned in the Rogue One visual guide and first appeared in Claudia Gray's Leia, Princess of Alderaan. The planet was a base for the early rebellion and is composed of red minerals with a heavy layer of salt on top. The base is pretty large and features a dusting of salt on the edges of the rock, red surface. Also, the base splits into two parts which is a cool feature. 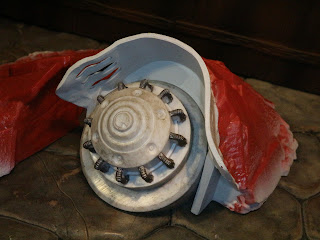 * What do you think this large piece of machinery is? It looks quite a bit like a Snowspeeder thrust nozzle, doesn't it? Perhaps it's a leftover from the planet's past when it served as a Rebel base? 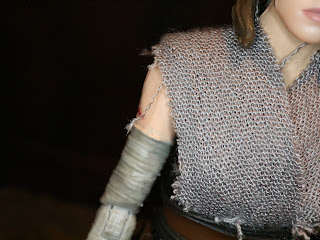 * While the soft goods wraps look great there definitely is some fraying going on here. That seems to happen on a lot of the Black Series soft goods. 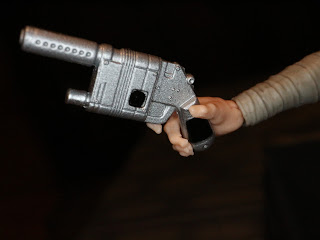 * The trigger guard of the blaster pistol is a solid piece meaning that Rey's trigger finger won't fit in there. That makes it fairly difficult for her to hold the pistol. 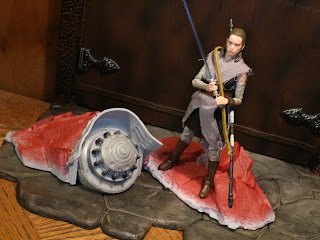 I've reviewed a couple of Rey figures, including Hasbro's Black Series Rey (Jakku) & BB-8, the K-Mart exclusive Rey (Starkiller Base), Rey with her Speeder, and Rey (Jedi Training).  I've also checked out the Micro Machines Speeder Chase set that includes a micro Rey on her Speeder.

If you're looking for more figures from Star Wars: The Black Series, check out the following: