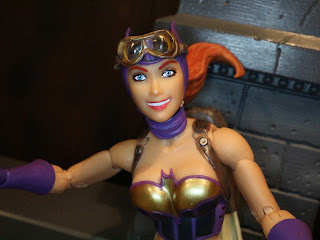 Every time I review a DC Collectibles product now I feel like I'm picking on them because I just have to mention how seemingly irrational their approach to action figure releases and cancellations has been this past year or so. Prior to the release of series 2 of the Bombshells figures (which are part of the larger DC Designer Series line) DC Collectibles went ahead and cancelled series 3. Before series 2 ever shipped. Way to build retailer and customer confidence, DC Collectibles. Now they've come back and said they've only cancelled two of the four figures, but still; what exactly is going on? It really feels like DC Collectibles wants to get out of the action figure business. Is this the case or did Mattel renegotiate a contract or something and that's putting pressure on DC Collectibles, forcing them to cancel certain releases. Who knows? All I know is that going into 2017 I had dozens of DC Collectibles releases preordered and about half of those were cancelled. Going into 2017 I have 6. That's pretty low. Anyways, today I'm here to talk about the Bombshells Batgirl. Bombshells Batgirl is definitely one of my least favorite Bombshells statues but I think this figure works better than the statue did. Let's check her out after the break... 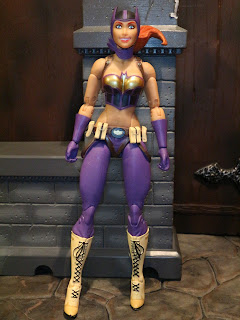 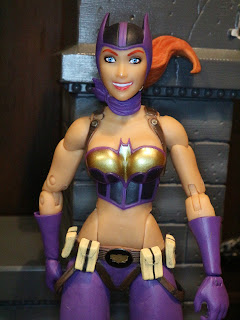 
* Batgirl is a terrific looking figure. I think the tall, thin appearance of the figure definitely makes this outfit look better than it did on the statue. The paintjob is very crisp and clean and the corset is quite nicely sculpted. It's actually a separately molded piece so the ears of the bat across the figure's chest stick up, making it seem like an actual piece of clothing. 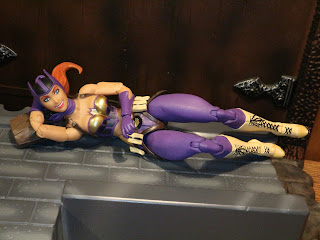 * The Bombshells have some fantastic articulation in this line. It's definitely one of the most well articulated lines DC Collectibles has ever released. She is just so insanely fun to play with and to photograph. Unfortunately, mine has a breakage issue, but I'll get to that in a minute. 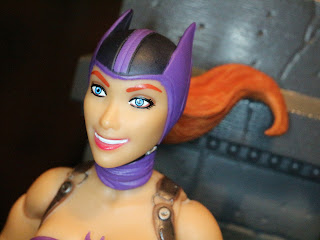 * I love this headsculpt. It's very lovely and fitting of Batgirl. The paintwork is crisp, the expression is jubilant, and the hair flowing out of her aviatrix cap helps to identify her as an old-school pilot with hair blowing in the wind. 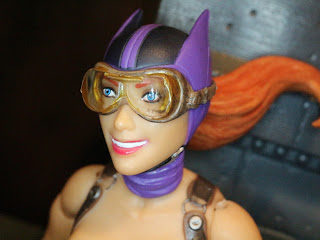 * Batgirl includes a pair of goggles that fit over her head. The fit is quite snug (so be careful putting them on) but they look great. You can position them down over Batgirl's face, rest them on her forehead, or just leave them in her hands. It's nice to have a few display options here. 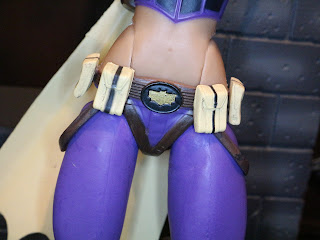 * The "utility" belt that Batgirl is wearing is a great detail. I love the large yellow pouches and the stylized batsymbol belt buckle. 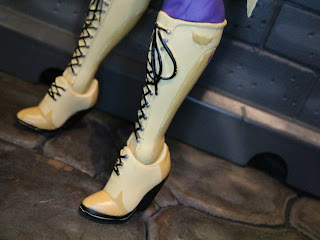 * Her boots are great, too. There are two different shades of yellow used along with lots of laces and a little bat emblem on the top of the boot. 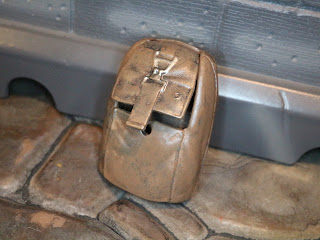 * Batgirl includes a removable parachute pack, an item present on the original statue as well. The backpack looks nicely weathered and the chute actually has a hinge joint allowing it to open and close. 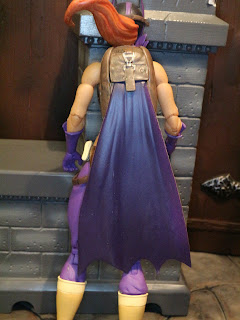 * There is small cape included that can fit inside of the parachute pack, hanging down. It would have been nice if two capes had been included (with one stretching out to the side like in the statue's design) but having the option to use the cape or not is another cool feature that gives you some variety in how you display Batgirl. 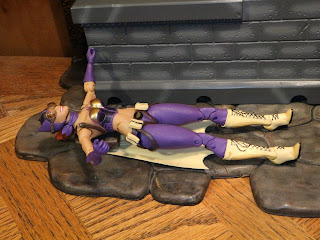 * First things first: Due to the severe heels of Batgirl's boots there is no way you're getting her to stand up on her own without using a stand or propping her against something. 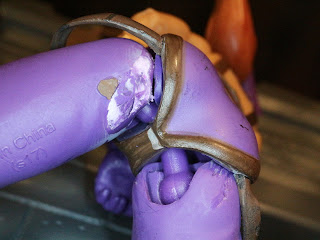 * Secondly, my figure has a few quality control issues. First up is this paint issue on Batgirl's upper leg. The paint seems to have dried and then cracked up here, tearing some plastic away from her hip. It affects the articulation of the interior hinge joints since some of the paint has stacked up, causing a rough surface to form. 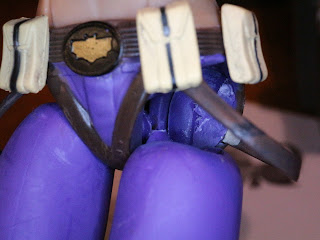 * Last, and certainly least in terms of desirability, the interior of the hip peg joint has begun to sheer in half and seems to be on the way to completely falling off. This is the Bombshells figure I've had any problems with and it definitely seems like a problem possibly caused by whatever issue created the paint clump mentioned above. Fortunately, I ordered through Big Bad Toy Store and they're sending me a replacement. They have great customer service and I can't recommend them enough. 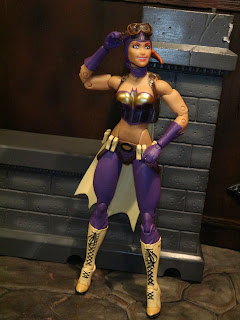 Batgirl easily could have been another really strong entry in this series but the quality control issues definitely cause my opinion of her to fall. Since her leg didn't fully break off I'm still giving her a Good overall rating. It definitely seems more like a one-off QC issue than a poor design. If it hadn't been for that, Batgirl would easily be a Great or Great and 1/2 figure. I am disappointed that DC Collectibles did away with the alternate hands and other cool accessories that the first series had, though. They really helped to make those original figures something special.

I've reviewed so much Batgirl stuff that she has her own review archive!

If you're looking for more DC Designer Series figures, check out the following: