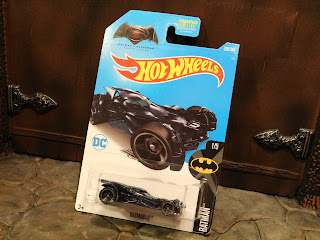 Last night I was out doing some last minute stocking and I stumbled upon another Batman vehicle from this little subset of five. I know Hot Wheels puts out quite a few high quality Batman vehicles in their higher end lines but I only bite when I find these little $1 wonders. Today I'm looking at the Batmobile from Batman v. Superman: Dawn of Justice. This model was first released in the Hot Wheels line last year but this is the first time I've picked one up. Let's check it out after the break... 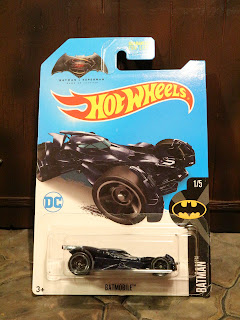 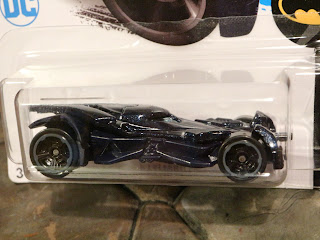 * The BvS Batmobile is a cool Batmobile model that seems to borrow from many previous Batmobiles while standing on its own four wheels as a unique entry in Batman's long tradition of incredible cars. The sculpt is clean and sharp and the tires look impressive for such a tiny car. 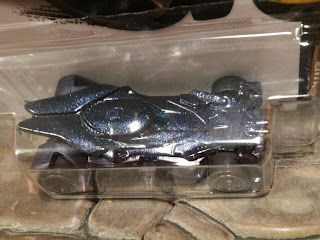 * The Batmobile is a bit more shimmery and blue than I would like. A lot of the Batman vehicles released by Hot Wheels in the standard value line tend to be bluish. Not sure why, really. I do love the various weapons on the front though. These accoutrements remind me a bit of the hidden weaponry on the Burton Batmobile. 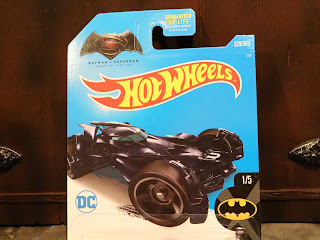 * While I don't have any past releases to compare it too I definitely think the card art is quite dull compared to previous Batman subsets. This just looks like any other Hot Wheels release.

This is a cool little vehicle. Again, for $1, these are some neat little collectibles. I don't own many Batmobiles in the 6-7 inch lines do to the amount of space they require, but these make it easy to have a nice collection at a low price and low space commitment. This is a Good and a 1/2 little stocking stuffer and a nice addition to my collection. These seem to be going fast, though, as my Wal-Mart restocked all of their Hot Wheels and I only found this one. It seems the Hot Wheels collectors are hunting these down!


I've reviewed quite a few other Batman Hot Wheels including: