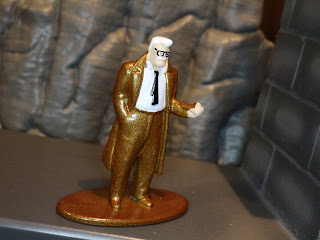 Time for another DC Nano Metalfigs review! Today it's the always vigilant Commissioner Gordon! Commissioner Gordon is a pretty cool inclusion in this line as he's definitely not one of those characters that typically sees a release in most DC lines. I'm very curious to see how deep Jada Toys will go with the DC Nano Metalfigs line and characters like Jim Gordon, Metamorpho, and Killer Croc give me hope that they'll continue to go deeper! This version of Commissioner Gordon clearly seems to be inspired by the Batman: The Animated Series version of the character as he's a bit older and is wearing that character's trademark outfit. Let's check this guy out a bit more closely after the break... 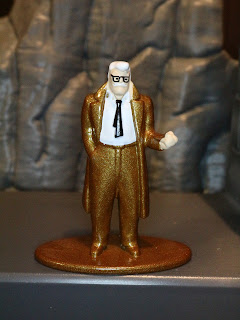 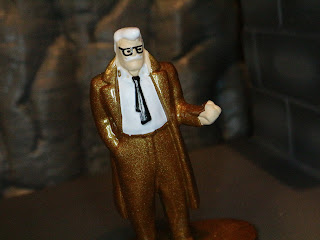 * First things first: Yes, Gordon kind of looks like Colonel Sanders here. It's quite remarkable, really. Second, yes, this is definitely the Batman: The Animated Series version of the character. The hair, glasses, mustache, tie; it's all there! The paintwork is fairly decent although there are one or two rough patches. Of course, this guy is under 2 inches tall so it's definitely not as noticeable in person at a normal viewing distance. 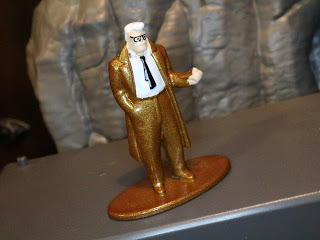 * The pose is pretty standard but it works for Gordon. I'm not sure what his left hand is supposed to be doing. It almost looks like he's flipping a coin. The main body of the figure is cast in a brownish colored metal. It's a bit unusual looking considering this is supposed to be a fairly typical brown suit but it's not terrible or anything. 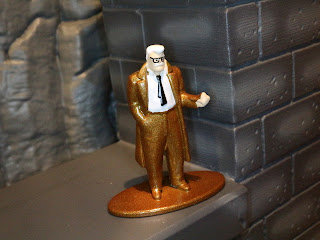 Commissioner Gordon definitely is plain when compared to the more colorful and dramatic outfits of the superheroes and supervillians but that's kind of his thing, isn't it? Despite all of the various masked vigilantes, metahumans, and other unusual individuals protecting Gotham City, there's Jim Gordon doing his job day in and day out. This is a Good and a 1/2 minifigure and another nice addition to the Nano Metalfigs line. I'd love to see some more members of the Bat-family in future series because, thus far, we only have Gordon, Batman, and Robin.