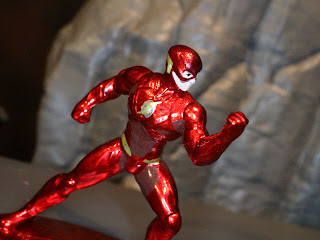 I enjoyed Justice League immensely and Ezra Miller's portrayal of the Flash was one of the highlights. I found him to be quite funny and I loved the manic, nervous energy he gave the character. While the Flash is absolutely a metahuman, he also served as the approachable audience surrogate who projected on screen our excitement at seeing the Justice League united. The comic based Flash Nano Metalfig was one of the best releases in the first wave of figures and this Justice League inspired version is almost as good. Let's check this one out after the break... 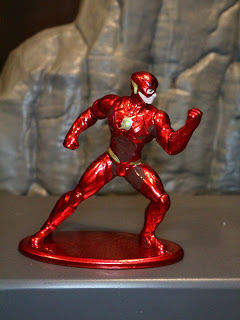 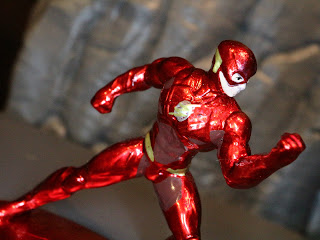 * The Flash has a pretty complex uniform for a minifigure under 2 inches tall. When you really get up close you can see that there are both shiny and matte sections of the Flash's armor. The color of the metallic armor here kind of reminds me of Iron Man. Anyways, the detail is pretty impressive on here for such a small figure. The face isn't terrible either. You know. For something this tiny. The fact that is looks like a face is a win in this case. 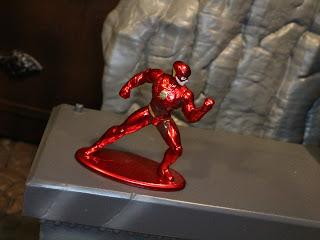 * While I don't like this pose as well as the sprinting pose of the comic based Flash, it's still pretty good. It looks like the Flash is about to either start running or he's involved in some combat. 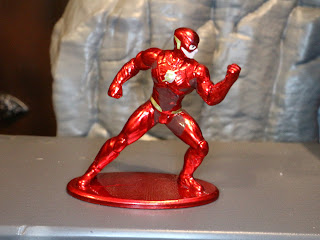 The Flash is another great die-cast metal minifigure. For $1 it's really hard to beat these little guys. I picked up as many new ones as I could find last week and was delighted when my bill was under $10 bucks. This is a Great rendition of the Flash. He looks cool, is solidly built, and is so much more fun than 99% of toy cars out there.


If you're looking for more reviews featuring the Flash, I've looked at the standard Justice League Flash, the super cool Target exclusive Flash 2-pack, the Mezco One:12 Collective The Flash, the DC Comics Multiverse DK2 Flash, the Lego DC Universe Riddler Chase which comes with a minifigure Flash, the Lil Bombshells Flash (Jesse Quick), and the Nano Metalfigs Flash by himself or as part of Five Pack A!


If you're looking for more DC Nano Metalfigs, check out the following: