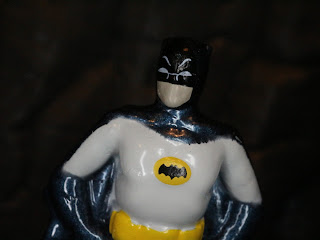 Just last week I was at my local Wal-Mart and I found a bunch of new DC Nano Metalfigs from Jada Toys! I love this little line; while they're not the best sculpts for being 97 cent die-cast metal figures of DC heroes I'm all in. I grabbed every new figure they had and I'll be looking at them over the next week or two. Today is the Classic TV Series Batman based on Adam West's portrayal of the Caped Crusader. A few pictures and some words about a tiny metal Batman are yours to read after the break, chum! 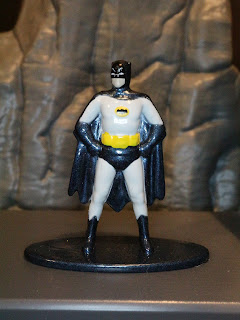 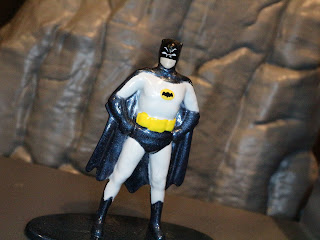 * While the paint is a bit gloppy looking in close-ups (all of my pictures probably show this figure as being much larger than in real life) the design is spot on. The facial features on the mask actually look really good and I love the style. Something about the pose and the design makes this look like the comic styled rendition of Adam West's Batman often show on licensed merchandise. The body is definitely closer to West's proportions though, which is a nice touch. 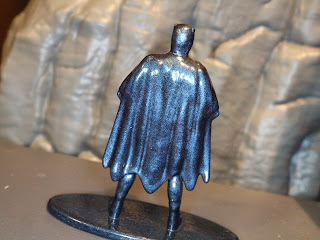 * The metallic blue the figure is molded in nicely recreates the look of this version of the Batsuit's cape and cowl. 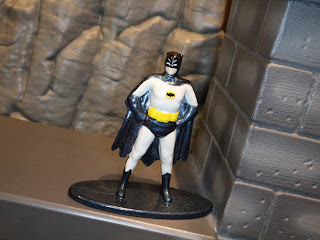 Remember that I'm not comparing these to more expensive action figures or anything: I'm fully aware that these are $1 minifigures available at mass market. That being said, this Classic TV Series version of Batman is one of the best looking figures out there in this line. He's a Great minifigure and well worth picking up as a stocking stuffer for yourself or your favorite Batman fan who loves the classic 1960s TV show. I hope Jada Toys sells tons of these this Christmas season as I'd love this line to continue. It's simple but it's one of my favorites of 2017!

I've reviewed so many Batman figures that Batman has his own review archive! Of course, if you're just looking for more Classic TV Series Batman figures I've also reviewed Mattel's 6 inch classic Batman and the Surf's Up Batman variant and the NJ Croce bendable Batman.

If you are looking for more DC Nano Metalfigs, check out the following: