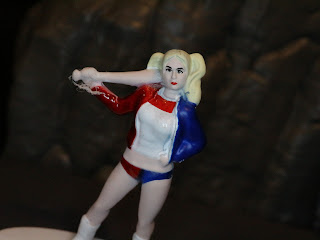 Another day another Nano Metalfig from Jada Toys. Today I'm checking out the Suicide Squad version of Harley Quin, perfect to pose with the Suicide Squad Joker figure released earlier this year. I've reviewed lots of versions of this Harley Quinn but this is probably the smallest version of her I've reviewed so far. She's a fun little trinket and another cool addition to a Harley Quinn collection. Let's check out this little die-cast diva after the break... 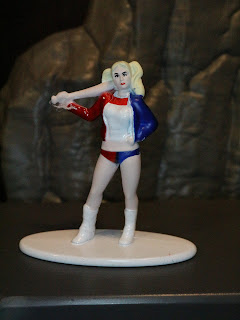 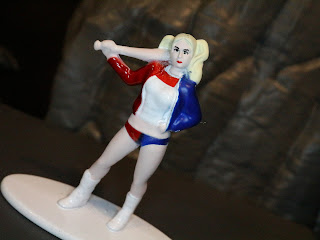 * The pose is great and the figure has a very neat, clean look to her. While there are lots of details missing (the printing on her t-shirt for one) the colors look spot on. With a figure this small and at this price, you have to manage your expectations. I think Harley is one of the neatest looking figures in the line thus far doe to the sharp paint details and the very clean sculpt. Heck, even her tiny face is pretty well captured for how small she is. * The metallic red and blue paint perfectly captures the shiny look of Harley's jacket and shorts. The baseball bat and the paint separation between her jacket and hair is kind of messy, though.

For under a dollar, Harley is a slick little minifigure. The proportions and paintwork overall are quite good, particularly from the front of the figure (the back is a bit messier). I am unabashed fan of this line and Harley is definitely one of the better figures. She's a Great minifigure and well worth tracking down. If you're a DC fan or a minifigure collector please go and support this line! It's such a unique line these days and it nicely manages to avoid the blind bag craze that usually makes stuff like this a chore to collect. For under a dollar each, snatch these up and give them to a toy charity or as stocking stuffers for the DC fans in your life!

I've reviewed so many Harley Quinn toys that she has her own review index! Check out the Harley Quinndex for more reviews!