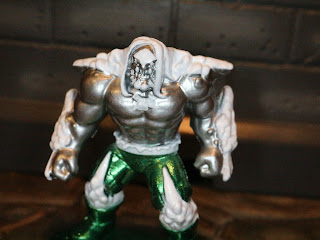 Just two more reviews left to complete my coverage of every new figure in Series 3 of Jada Toys' DC Nano Metalfigs line! Today I'm checking out Doomsday, the pre-historic Kryptonian baddie who killed Superman in the early 1990s. Jada Toys is doing a great job of creating some diverse character selections in each section and I was thrilled to see Doomsday. He's an important character in DC Comics who adds another Superman villain to the roster. Let's take a closer look at Doomsday after the break... 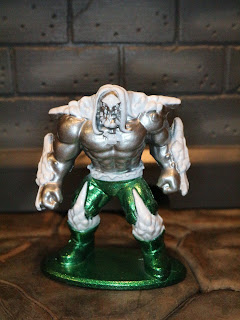 * Doomsday is a pretty beefy looking figure. He's not any taller than most figures in the line (although he is sculpted with his knees bent) but he does look a lot wider and much more muscular. The bone growths jutting out of his body also add to his ferocious and imposing presence. 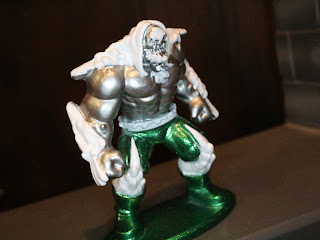 * Doomsday has a very solid paintjob. I'm really glad that Jada Toys has continued to improve this line and Doomsday is another example that shows off some very clean paintwork for a figure that stands under 2 inches tall. The metallic color scheme looks great for both Doomsday's stone gray skin and his rocking green pants. 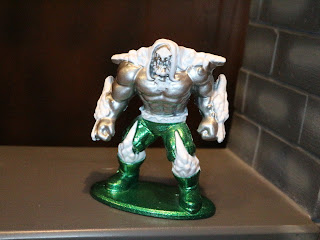 Doomsday is nicely rendered in 1 3/4ths inches of die-cast metal. For a buck, these little minifigures are tough to beat for DC fans. I love them and I'm thrilled to add Doomsday to my lineup. This is a cool, quality little collectible and a Great addition to your collection. Need a little representation of The One who Killed Superman? Then this has your name written all over it.

This is actually the first Doomsday figure I've reviewed on Action Figure Barbecue.